Across the Board: Davidowitz's Saturday stakes horses to bet 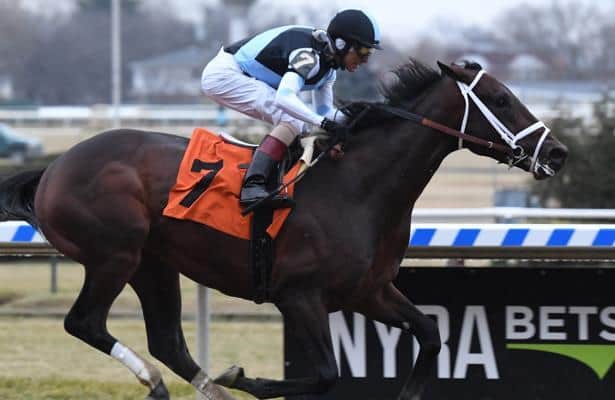 The weather in various parts of the country threatens to force changes in the better races on tap for Saturday.

There certainly is a legit threat of rain in the Northeast, the South and the far West. All of this just might cancel a good race or two on Saturday -- or at least move one or more of these races to Sunday, or next weekend.

That said, the format that I’ve developed for this weekly Friday column is to pick a logical race winner or a serious threat or two while hoping the weather holds to permit the best horse(s) to fire their best shot(s).

Here are the best races I see developing for Saturday. Among them are a few in New York, Louisiana and Florida.

At Aqueduct, the traditional Withers Stakes (G3) is and has been a logical, early season prep for the richer and more important Wood Memorial (G2) and eventually, the Kentucky Derby.

For many years, the Withers was run at a shorter distance than the Wood and rarely was considered as much of a key prep. But a top performance by any one of the seven horses entered in this year’s Withers just might provide an early stamp of approval given its increase beginning in 2018 to 1 1/8 miles.

In this year's Withers, the Todd Pletcher-trained Moretti is adding blinkers to advance his natural speed. If he accomplishes that, the nine-furlong maiden winner will be a formidable contender beyond this weekend.

Another logical contender is Tax, a Danny Gargan-trained son of Arch who finished third in his third lifetime start at Aqueduct on Dec. 1 and has trained superbly for his 2019 season debut. He also earned the highest last race Beyer Speed Figure with that third behind Maximus Mischief in the Remsen (G2) and deserves a close look again going the nine-furlong distance after four good workouts since his last start. They set him up for a nice try in this contest.

Lucky Lee, winner of his last two at Parx Racing in Pennsylvania, Our Braintrust and Not that Brady are three other contenders in this stakes that cannot be taken lightly. At the bottom line, the horses who actually turn in strong performances in Saturday’s Withers will command respect as they move forward. I believe they will be worth a careful watch on Saturday.

At the Fair Grounds in New Orleans, there are a pair of turf stakes with relatively modest purses, the $60,000 Lloyd Captain Maestri Memorial at one mile, and the $75,000 Nelson Menard Memorial at about 5-1/2 furlongs. Both run on the turf.

While a large field is set to compete in the shorter turf sprint, I  like two horses out of this large field: Fiesta and the streaking Oxford Comma, who is unbeaten in her three turf sprints at this approximate distance.

At Gulfstream Park, where the weather might cause problems, the Forward Gal (G3) for 3-year-old fillies at seven furlongs may prove to be more wide-open than it appears on paper.

At this point, I slightly favor the maiden winner Feedback over the speedy Fashion Faux Paus. Both of these lightly raced fillies seem to have a bright future, and Saturday’s race may give us the clues we need to appreciate them both.

In the very next race at Gulfstream, the popular Swale Stakes (G3) at seven furlongs often leads to a stronger effort when the Florida-based 3-year-olds stretch out for races like the Fountain of Youth and Florida Derby.

As of this moment, I slightly prefer Seismic Jolt, a winner of two of his four career outings and a colt who seems to be developing nicely. This is a tough race, however, so Country Singer, Zenden, Call Paul and High Crime are not to be taken lightly when formulating your vertical wagers.

As seen especially in the quality of 3-year-olds on display Saturday at Gulfstream, there are a number of talented horses scheduled to compete -- again, weather-permitting. Please tune back in to this space on Monday to get my analysis of what really happened in the above races.

Steve Davidowitz has written many books on handicapping, including the classic, "Betting Thoroughbreds." His Across the Board columns appear regularly at Horse Racing Nation. Click here to read past editions.