Across the Board: Breeders' Cup Friday contenders, longshots 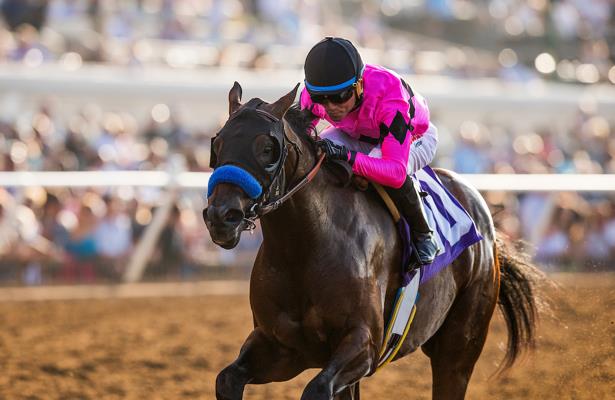 Photo: Eclipse Sportswire
With 14 Breeders’ Cup races scheduled for Friday and Saturday at Churchill Downs, I'll use a pair of columns this week to outline logical top contenders, plus any longshot that rates a realistic upset chance.
This edition covers all of Friday and a few of Saturday's races. Look for Part 2 to run Thursday.
Juvenile Turf Sprint
With this new Breeders' Cup event run at 5 1/2 furlongs, here are my two most logical win contenders...
Sergei Prokofiev, trained by the highly accomplished Aidan O’Brien, ran well in the spring and recently returned to top form with a strong victory in a Group 3 race. Looms a major late threat.
Soldier’s Call, trained by low-profile European Archie Watson, also fits the bill. This 2-year-old did something rare by running well against older company in France. That should set him up well.
This over-subscribed race will have many longshots. Look ahead to our next race for one to watch.
Juvenile Fillies Turf
For this event run at a mile on the grass, my two most logical contenders are Newspaperofrecord and Concrete Rose.
Newspaperofrecord is trained by Chad Brown, who has won this Breeders' Cup race four times! In addition, this 2-year-old filly has won both her starts by daylight and clearly is the one to beat.
Concrete Rose is trained by Rusty Arnold and this filly looked very good going up from a maiden win to a Grade 2 race at Keeneland. She seems to love two turns.

A longshot to keep an eye on: So Perfect would still be a threat if she were to go instead in the Juvenile Turf Sprint against males, but she seems a much better fit here for O’Brien.

Going 1 1/16 miles on the main track, my two most logical contenders are Bellafina and Restless Rider.

Bellafina, trained by Simon Callaghan, took blinkers off and scored three graded stakes wins on the West Coast. She's the one to beat.
Restless Rider, trained by Kenny McPeak, has hinted at top-notch ability on more than one occasion. She commands respect.

Longshot to watch: Jaywalk was quite strong taking the one-turn Frizette (G1) at Belmont but hinted that she has more in the tank. Ranks close to the top two.

Juvenile Turf
There are several realistic contenders in this wide-open race, all hard to separate. Yet, I do rank a pair of Europeans as the most logical contenders, and I see at least one respectable U.S.-based horse as a realistic longshot.
My top contenders Broome and Anthony Van Dyck were both trained and successfully raced in Europe by O’Brien. Sensing a theme?
A longshot worth noting: The Todd Pletcher-trained Current fired a big rally in his latest at Keeneland, winning the Bourbon Stakes (G3). May prove best of several high-priced contenders.

At the same 1 1/16-mile distance as the Juvenile Fillies, my top contender is Game Winner, one of many highly regarded 2-year-olds from the Bob Baffert barn. He sports versatile speed, good overall form and nice workouts for this. Should take some beating here at the windows.

A Longshot to watch: Standard Deviation, a Chad Brown trainee who was OK third behind a slow pace in a recent Keeneland stakes, worked most recently with blinkers on. Might prove to be a lot better, if given a reasonable pace in which to fire.

The first of Saturday's Breeders' Cup races, the seven-furlong race has one main standout after the defection of Baffert-trained Dream Tree. The "other" Baffert contender, Marley's Freedom, has won multiple sprint stakes and is the likely favorite as well as the one to beat here.

A longshot to keep an eye out for: Golden Mischief seemed to improve when moved to the Brad Cox barn and needs just one more step forward to be a legit threat to the favorite.

Another at 5 1/2 furlongs, this race features familiar names from last year, and I like Peter Miller-trained Stormy Liberal, who is entering in nice form.

Disco Partner, trained by veteran Christophe Clement, also flashed good form in latest at Belmont on turf that was softer than he usually likes. Clearly fit and ready for best.

My longshot to watch: Will Call, another Cox trainee who recently fired a strong late burst and previously has won on this Churchill turf course.

Cross-entries for races on the Saturday card make analyzing some races, namely the Dirt Mile, difficult. We will evaluate remaining events on Thursday, including the Distaff, Turf and Classic.

Steve Davidowitz has written many books on handicapping, including the classic, "Betting Thoroughbreds." His Across the Board columns appear regularly at Horse Racing Nation.