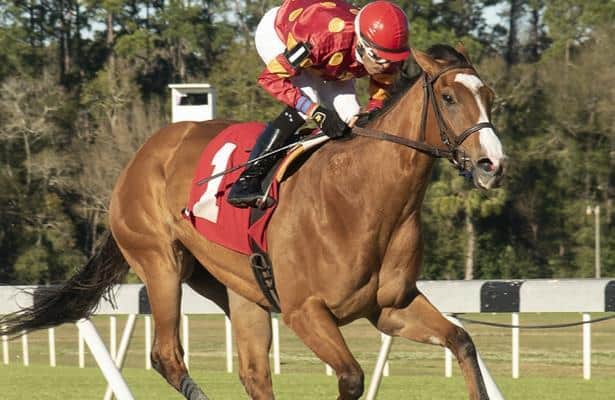 Even with the defection of a key player, the Grade 1, $150,000 Acorn Stakes remains a strong race in the 3-year-old filly division. Seven entries are set to contest the 1 1/16-mile race around one turn on the Belmont Stakes undercard.

While the race lacks Venetian Harbor-- who will instead wait for either the July 11 Ashland (G1) at Keeneland or Test (G1) at Saratoga-- it does contain a couple rising stars in Casual and Gamine, who both make the leap from the allowance level. Other runners are also in with a chance, making this a good betting race for value players.

The Acorn is carded as the eighth race with a post time of 4:15 ET.

1. Gamine, 7/5 (Into Mischief – Bob Baffert/John Velazquez – 2: 2-0-0): Considering the 2 for 2 record under trainer Bob Baffert, Gamine is hard to ignore. The second win came in an optional claimer at Oaklawn, where she held on by a neck over Speech. Six lengths separated Speech and the third-place Queen Bridget, which is a good sign. Gamine also earned an impressive 117 TimeformUS Speed Figure. However, Speech did not threaten Swiss Skydiver in the Santa Anita Oaks (G2) one start later, losing by four lengths. Gamine merits respect. Win contender.

2. Lucrezia, 6-1 (Into Mischief – Arnaud Delacour/Julien Leparoux – 6: 3-2-0): Lucrezia chased Swiss Skydiver around the track in the Gulfstream Park Oaks (G2) before losing to that pacesetter by 3 ¼ lengths. Swiss Skydiver went on to capture the Fantasy Stakes (G2) and Santa Anita Oaks (G2), helping to flatter Lucrezia’s effort. Some observers argue Lucrezia lost the race when Swiss Skydiver was allowed to coast on an uncontested lead and easy pace. Now, she faces tough pace opponents in Gamine and Casual. None of her dirt figures on TimeformUS are above 100 either. On the plus side, the price is right to take a shot. Unlike Gamine and Casual, Lucrezia ran against a top-tier filly in Swiss Skydiver, even if she lost. The pick.

3. Water White, 20-1 (Conveyance – Rudy Rodriguez/Jorge Vargas Jr. – 6: 2-2-0): After losing to Harvey’s Lil Goil by 7 1/2 lengths in the Busanda Stakes, Water White picked up a nice win in the Busher Invitational by a nose over Kansas Kris. But Kansas Kris finished a dismal 12th in the Fantasy one start later, before a non-threatening fourth in a local allowance race. In general, the spring Aqueduct group of colts and fillies is hard to trust. With that in mind, she appears outclassed. Toss.

4. Casual, 5/2 (Curlin – Steve Asmussen/Ricardo Santana Jr. – 2: 2-0-0): Similar to Gamine, Casual owns two wins in two starts. The second victory came in an allowance optional claimer at Churchill Downs, where Casual won by 1 1/4 lengths over She Can’t Sing. Unfortunately, She Can’t Sing went on to finish a hanging fourth in subsequent optional claimer after failing to switch leads in the stretch. Also, the third-place Shadilee  from Casual's race came back to be a dismal 10th in that same Churchill race, while the fourth-place finisher behind Casual, Recoded, also came back to finish off the board. So who did Casual defeat in that allowance race? Still, Casual is respected based on her record and strong connections. Win contender.

5. Glass Ceiling, 20-1 (Constitution – Danny Gargan/Joel Rosario – 5: 3-0-0): This improving filly took a Gulfstream optional claimer by 3 3/4 lengths in her most recent start after leading gate to wire. Two races ago, back in January, she also won a starter allowance at Aqueduct by three lengths. The two-race win streak ends in the difficult Acorn though, as she is outclassed against some quality fillies. Toss.

6. Pleasant Orb, 15-1 (Orb – Barclay Tagg/Manuel Franco – 4: 1-2-1): After breaking her maiden in March at Gulfstream, Pleasant Orb tried the Hollywood Wildcat Stakes on the same course and ran a credible third, 4 ¼ lengths behind Tonalist’s Shape. Is Tonalist’s Shape that good though? Remember, Tonalist’s Shape had run a non-threatening seventh in the Gulfstream Park Oaks. If Pleasant Orb flattened out against her, it is unlikely she can handle this field either. Toss.

7. Perfect Alibi, 4-1 (Sky Mesa – Mark Casse/Irad Ortiz Jr. – 6: 3-2-0): Here is a wildcard. This filly has not started since her middling fourth-place finish in the Breeders’ Cup Juvenile Fillies. Prior to that, she was runner-up in the Alcibiades Stakes (G1) and won both the Spinaway Stakes (G1) and Adirondack Stakes (G2). It is fair to feel skeptical about 3-year-olds who flashed talent early as a 2-year-old, as sometimes they burn out or fail to develop the following year. Perfect Alibi could prove that theory wrong and win, but it is preferable to watch her perform for now. Use underneath.

From a value standpoint, Lucrezia is the right filly in terms of vertical wagers. She competed against the best 3-year-old female in Swiss Skydiver at Gulfstream and could move forward from the experience. She also owns useful tactical speed.

While Gamine and Casual both can develop into top runners in this division, they are inexperienced at the graded stakes level with only optional claiming wins. Both of them will also offer low value to bettors because of the popular connections.

However, all three of them are usable in the multi-race wagers.