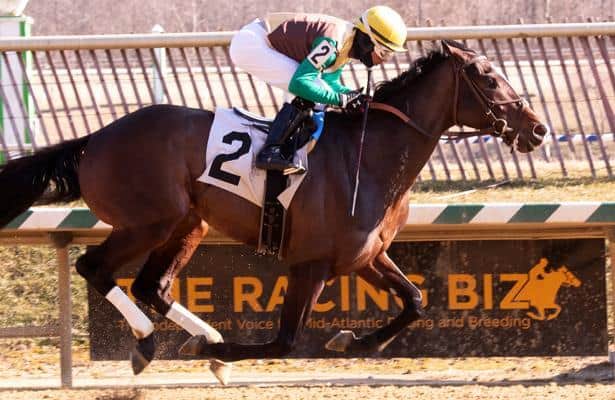 Runnymede Racing’s multiple stakes-winning 3-year-old Alwaysmining put in his final breeze Saturday morning ahead of an expected start in the $100,000 Private Terms on March 16 at Laurel Park.

Alwaysmining went a half-mile over the all-weather track at the Fair Hill Training Center in Elkton, Md. for trainer Kelly Rubley. It was the Stay Thirsty gelding’s second work since extending his win streak to four, the last three in stakes, in the Miracle Wood Feb. 16 at Laurel.

“I was very happy with the work. He went nice in 48 and one and galloped out strong, so fingers crossed,” Rubley said. “He’s definitely continuing to move forward. I think he’s starting to fill out a little bit and he’s maturing. He’s doing very well.”

Alwaysmining has put together his win streak in front-running fashion, by 18 ¼ combined lengths, kicked off with a 10-length romp going a mile over a sloppy, sealed track last October. He won the Maryland Juvenile Futurity and Heft Stakes to cap his 2-year-old season, both at seven furlongs, and drew off by 4 ¼ lengths in the one-mile Miracle Wood, his sophomore debut.

The Private Terms, contested at about 1 1/16 miles, would mark the two-turn debut of Alwaysmining, who has raced exclusively at Laurel Park with five wins from seven starts. He is also nominated to the Sunland Derby (G3) Sunday, March 24 at Sunland Park.

“We’ve nominated him to a few races. I think we’re probably likely to run in the Private Terms,” Rubley said. “This looks like the most logical spot to try [two turns]. We don’t have to ship and we get to see how he handles it in a nice, safe environment that he loves.”

Also working Saturday at Fair Hill for Rubley was West Point Thoroughbreds’ General Downs, winner of the Native Dancer Stakes Jan. 12 at Laurel and fourth last out in the 1 1/8-mile John B. Campbell Feb. 16, beaten 3 ½ lengths.

Rubley is targeting the $100,000 Harrison E. Johnson Memorial, also at nine furlongs, for General Downs on a March 16 program that features five stakes worth $450,000 in purses including the $100,000 Beyond the Wire for 3-year-old fillies and a pair of $75,000 events for older Maryland-bred/sired horses – the six-furlong Not For Love and seven-furlong Conniver for females.

“He had a very nice half-mile work and I was very happy with him, also. He galloped out very strong. We’re pointing him to the race on Saturday, as well,” Rubley said. “I have to wonder if maybe we weren’t just a little too close to the pace last time, but that’s how it played out. I don’t think the mile and an eighth is out of his realm, so we’re going to give it another shot and see.”