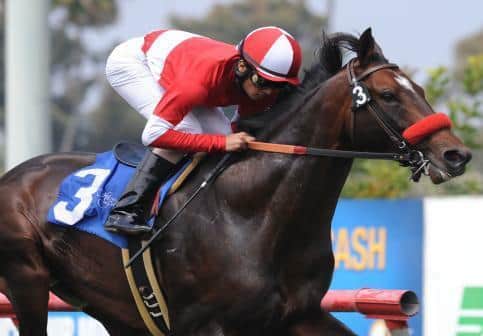 Acclamation will try to become only the second multiple winner of the $250,000 Charles Whittingham Memorial Handicap Saturday at Hollywood Park.

A Grade I at 1 ¼ miles on turf, the Whittingham is the most lucrative of four stakes races Saturday. The others on the 11 race program are the $150,000 Honeymoon Handicap, the $100,000 Affirmed Handicap and the $70,000 Cinderella Stakes.

In conjunction with the simulcast of the 143rd Belmont Stakes, Hollywood Park will have an early post time (11 a.m.).

Track gates will open at 8 a.m. The first of 13 imports from Belmont Park will be run at 8:35 a.m. The Belmont Stakes will be simulcast between the eighth and ninth races at Hollywood Park. Scheduled post time for the final leg of the Triple Crown is 3:35 p.m. PDT.

In addition, Hollywood Park will play host to 25 gourmet food trucks. The trucks will be located in the North Park. The Food Truck Festival will begin at 10 a.m. and continue until 5 p.m.

A 5-year-old son of Unusual Heat and the Silveyville mare Winning in Style, Acclamation will try to become the first horse to win both the Jim Murray Memorial and the Whittingham twice. Owned by breeders Bud and Judy Johnston and Peter and Mary Hilvers and trained by Don Warren, Acclamation won his second consecutive Murray by seven lengths May 14.

The victory was the fifth in 24 starts for the California bred and increased his earnings to $608,048. Four of his wins have come in seven races over the Hollywood Park turf course.

The only horse to win the Whittingham more than once is John Henry. The extremely talented gelding captured the race three times (1980, 1981 and 1984) when it was called the Hollywood Invitational Turf Handicap.

Multiple graded stakes winner Bourbon Bay will make his first appearance since a disappointing off the board effort in the $5 million Dubai Sheema Classic March 26 at Meydan Race Course in the United Arab Emirates.

Owned by David and Jill Heerensperger and trained by Hall of Famer Neil Drysdale, the 5-year-old Sligo Bay gelding out of the Conquistador Cielo mare Coral Necklace has won six of 17 while earning $359,424.

Drysdale, who spent four years as an assistant to Whittingham, will be looking for a record tying seventh win in the race. Drysdale, whose most recent victory came with Artiste Royale in the 2008 renewal, would equal Whittingham and Bobby Frankel with a win Saturday.

“He went well,’’ said Drysdale, discussing a seven furlong work in 1:26.80 turned in by Bourbon Bay June 5. “He will probably be stalking the pace. There is speed in the race.’’

Trainer John Sadler, who ended a stakes drought when taking the Californian last Saturday with Twirling Candy, will be represented by Celtic New Year and Red Alert Day.

Owned by Michael Jawl, Celtic New Year was last seen finishing a close third – beaten by a half-length – in the San Juan Capistrano Handicap April 17 at Santa Anita. A 4-year-old North Light gelding out of the Dynaformer mare Reggae Queen, Celtic New Year has won four of 14, banking $112,422. This will be his first appearance in a Grade I.

Red Alert Day, a 6-year-old English bred son of Diktat and the Green Desert mare Strike Hard, will make his first start for Sadler after being claimed for $32,000 May 15 by owners Gary and Cecil Barber.

Fourth in the Group I Middle Park Stakes in the fall of 2007 at Newmarket in his native country, Red Alert Day has won five of 33 and earned $246,922. His best finish in three attempts in graded races in this country was a fifth in the Kilroe Mile March 6, 2010.

Falcon Rock was the runner-up in the Jim Murray for a second year in a row May 14. The 6-year-old Hawk Wing gelding out of the Caerleon mare Champaka has two wins in 20 starts and a bankroll of $155,182. He is trained by Simon Callaghan for owner Michael Tabor.

Haimish Hy was third in last month’s Murray and is winless in five starts since his upset at nearly 12-1 in the Hollywood Derby last Nov. 28. Owned by a partnership that includes Zvika Akin, Richard Franco and trainer Art Sherman, the 4-year-old Ecton Park colt out of the Equalize mare Tifonica has won five of 15 and earned $332,980.

Trainer Jim Cassidy will try for a Honeymoon repeat when he saddles Singapore Lilly and Whisper Louise in the Grade II for 3-year-old fillies at 1 1/8 miles on turf.

If successful, Cassidy, who won this event in 2010 with Evening Jewel, will become the first trainer to win the Honeymoon in consecutive years since Paulo Lobo, who won with Quero Quero in 2003 and Lovely Rafaela in 2004.

Owned by Jeffrey DeHaven, Singapore Lilly will have to improve significantly off her United States debut. The Irish bred daughter of Mujadil and the Lake Coniston mare Swallow Falls was last of seven in the China Doll March 13 at Santa Anita.

Previously, Singapore Lilly had won two of nine in England and Italy. She has earned $124,193.

Second in the Providencia April 9 at Santa Anita in her first in this country, Whisper Louise will be looking for her third lifetime victory in the Honeymoon. The Irish bred daughter of Chevalier and the Warning mare Patamar has started 10 times and banked $65,923.

“I was very happy with her first start,’’ said Cassidy in reference to Whispering Louise’s Providencia performace.

Cambina, who had a three race win streak snapped when third as the 4-5 favorite in the Senorita Stakes May 7, will stretch to the distance of her win in the Providencia.

Owned by a partnership and trained by Jeff Bonde, Cambina, a Hawk Wing filly out of the Peintre Celebre mare Await, has won five of 10 and earned $252,426.

Bonita Star returns to California after a fourth place finish in the Edgewood May 6 at Churchill Downs. Owned by Jim Ford and Ken Smole and trained by Jamie Lloyd, Bonita Star has two wins in nine starts and earnings of $43,804.

Star Billing will try to remain perfect in three races for owner-breeder George Krikorian and trainer John Shirreffs. The Dynaformer filly out of the Thunder Gulch mare Topliner followed a maiden victory at Santa Anita March 18 with a 2 ¾ length win in the Grade III Senorita. She’s earned $92,400.

Up In Time will stretch out for Callaghan and owner Anthony Ramsden after a win at six furlongs in her Hollywood Park debut May 19. In her only previous race around two turns, the daughter of Noverre and the Inchinor mare Up At Dawn was fifth in the China Doll.

Second at 42-1 in the Senorita, Entrustment will attempt to give trainer Paddy Gallagher his third Honeymoon win in seven years. Owned by Edward and Theresa DeNike, the Forestry filly out of the Private Account mare Entrusted has won two of five, banking $61,320. Gallagher’s earlier victories came with Three Degrees (2005) and Valbenny (2007).

Sarah’s Secret is undefeated in three races for owner-breeder Joan Hadley Thoroughbreds and trainer Kathy Walsh, but the Honeymoon will be the first graded start for the daughter of Leroidesanimaux. Out of the Luhuk mare Sarasota, Sarah’s Secret has earned $87,000. She has yet to run beyond 6 ½ furlongs.

Slane Castle will return to grass after upsetting maidens at nearly 71-1 May 28, providing jockey Joe Steiner with his first win in more than six years. Owned by Patrick and Elizabeth Everard and Penley Leonard and trained by Robert Leonard, the Castledale filly out of the Kris S. mare Clean Up Kris has earned $38,600 while winning once in six starts.

Trainer Bob Baffert holds a strong hand in the Affirmed, a Grade III for 3-year-olds at 1 1/16 miles over Cushion Track.

In his first outing of the Spring/Summer meet, Awesome Patriot won the Alydar Stakes, leading throughout to win by three-quarters of a length May 8. Owned by Lanni Family Trust, the son of Awesome Again and the Cee’s Tizzy mare Tizamazing has won three of six and earned $112,600.

Coil made his 2011 debut May 6, winning an optional claimer by 1 ¼ lengths. One of his victims that day was stablemate Smash, who has since come back to win.

Owned by Mike Pegram, Karl Watson and Paul Weitman, the Point Given colt out of the Theatrical mare Eversmile is 2-for-3 with earnings of $58,560.

The Affirmed will be the first start beyond 6 ½ furlongs for Coil, who was bred in Florida by original owner Glen Hill Farm. He had been considered for the Woody Stephens Stakes at Belmont Park Saturday, but Baffert opted to keep Coil in California.

Akkadian will make his first start on something other than turf. Trained by Julio Canani for owner Gary Broad, the Tiznow colt out of the Souvenir Copy mare Papa Sids Girl has won two of four and earned $77,760.

Runflatout will stretch out again for Sadler and owner West Point Thoroughbred after losing the seven-furlong Lazaro Barrera Memorial by a nose May 15. The son of Flatter and the Grand Slam mare Slammin’ Lil has won once in three tries, banking $52,400.

Spud Spivens will make his graded debut for owners Vincent and Audrey Marchionno and trainer Henry Moreno after beginning the meet with two wins. The Tizbud gelding out of the Cutlass Reality mare Oceans Reality has won two of 10 and earned $99,600.

Northern Indy ships from Golden Gate after a narrow victory as the 5-2 favorite in an allowance May 12. Owned by Highland Yard LLC and trained by O J Jauregui, the son of A.P. Indy and the Polish Numbers mare Polish Nana has won two of eight, earning $39,980.

Trainer Walther Solis will have two starters – Silent Sue and Willa B Awesome – in the Cinderella, an ungraded race for 2-year-old fillies at 5 ½ furlongs.

After finishing third in the initial outing of her career May 1, Silent Sue won versus maidens May 22. The daughter of Silent Name and the Tiffany Ice mare Cold Porridge has earned $36,000.

Willa B Awesome is 1-for-1, prevailing by 2 ½ lengths against California breds April 21. Owned by a partnership that includes Phil Daniels and Patsy London, the Awesome Gambler filly out of the Nineeleven mare Cause I’m Tricky earned $30,000 for the victory.

Killer Graces lost by a nose in her debut May 1. A daughter of Congaree and the Old Trieste mare Heatherdoesntbluff, Killer Graces earned $10,000 for breeder Brian Kahn, who co-owns the filly with trainer Rafael DeLeon.

Trainer Mike Harrington will try for his first Cinderella win with Gogi. The daughter of Swiss Yodeler and the Cee’s Tizzy mare Self Taught won by 3 ½ lengths versus California breds May 12. She is 1-for-2 with earnings of $35,400. She is owned by her trainer and was bred by Harrington and wife Patricia.

Miss Ambition knocked off $40,000 claimers in her debut May 13 for Roney and the Roncelli Family Trust of breeder Gino Roncelli and trainer Peter Miller. The daughter of Touch Gold and the Meadowlake mare Adios Meadowlake collected $16,200 for the victory.

The field is completed by three first time starters – Chloe W, a daughter of El Corredor and the Lively One mare Fair and Lively trained by Eric Kruljac for Gem, Inc., Por Que’ Te Quiero, a daughter of A.P. Indy out of the Dixie Union mare Sensation trained by Eric Guillot for owner-breeder Southern Equine Stable LLC and Wild Truffles, an Offlee Wild filly out of the Candi’s Gold mare Lady Truffles owned by Janavar Thoroughbreds LLC and trained by Leonard Powell.