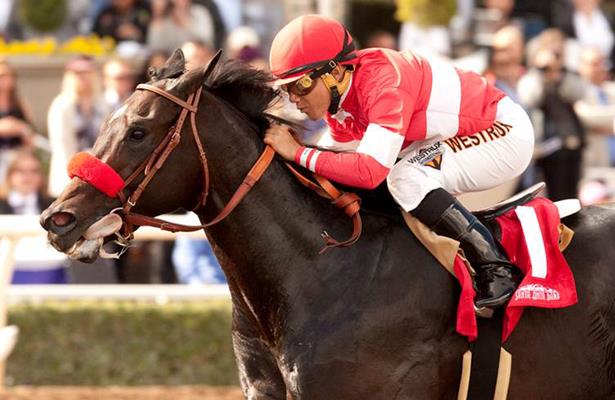 Multiple stakes winner Acceptance, who is unbeaten in three starts for trainer Don Warren, and Tough Sunday, a horse who has overcome being born deaf, blind and without a mother, headline a field of eight California bred or sired 3-year-olds in Saturday’s $250,000 California Cup Derby at 1 1/16 miles.

Bred by Old English Rancho and owned by E.W. and Judy Johnston and Robert Riggio, Acceptance broke his maiden at first asking by 13 ¼ lengths and he comes off emphatic wins versus state-breds in the one mile King Glorious Stakes on Dec. 14, and in the seven furlong Golden State Juvenile on Nov. 1.

By Vronsky and out of the Perfect Mandate mare Allswellthatnswell, Acceptance has banked $257,600—easily making him the leading money earner in the Derby lineup.

Tough Sunday, who is owned by his breeder, Nick Alexander and trained by Steve Miyadi, comes off an impressive 6 ¾ length state-bred maiden special weight win going seven furlongs on Dec. 28 and will try a route of ground for the first time in his fourth career start.

In breaking his maiden, Tough Sunday, who is by Grazen, from the General Meeting mare Sunday Dress, earned a Cal Cup Derby best last-out Beyer Speed figure of 83 and will be ridden back by Tyler Baze.  A truly miraculous story, Tough Sunday endured a difficult birth in which his umbilical cord became compromised, resulting in a lack of blood flow and oxygen.  In addition to being born deaf and blind due to the lack of oxygen, he lacked a nursing instinct, and as a result, was abandoned by his mother.

When asked about his chances stretching out, Baze responded, “I love this horse.”

Second, beaten three lengths by Acceptance in the King Glorious, Mr. and Mrs. Larry D. Williams’ homebred Pulmarack broke his maiden going a mile two starts back and merits respect in what will be his fifth career try.

Although a well beaten fourth at 3-1 in the King Glorious, Griffen Thoroughbred Stables’ Mischief Clem will try to rebound for the potent team of Kent Desormeaux and Bob Hess, Jr.

There is special early first time on Saturday of 12 noon.  Admission gates open early as well at 10 a.m.