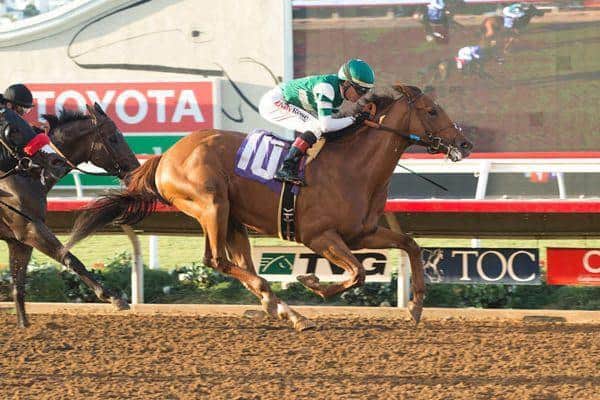 Hronis Racing’s Accelerate, an impressive maiden race winner in his last start, made a successful jump into stakes competition Friday with a game triumph in the featured $100,000 Shared Belief Stakes at one mile for three-year-olds.

With Tyler Baze in the saddle, Accelerate, the 9-5 second choice, forged to the lead in the upper stretch and then held off the late challenge of longshot Semper Fortis to win by a half-length in 1:35.74. Taman Guard, who set the pace until overhauled by Accerlerate, held on well to be third, a half-length behind Semper Fortis and six and three-quarter lengths in front of fourth-place Mishegas.

Who’s Out, the 6-5 favorite, was prominent to the far turn but faded to be sixth of seven sophomores who went to the gate. Scratched from the race were Spanish Hombre, Belvoir Bay, Iron Rob and Knight of Drama.

Accelerate, a chestnut son of Lookin At Lucky trained by John Sadler, was an eight and three-quarter length winner of a maiden race July 28 and thus was well-supported in the Shared Belief, a race formerly called the El Cajon Stakes but renamed to honor the late champion who won the 2014 Pacific Classic. Shared Belief died in December of 2015 of complications from colic.

Hronis Racing and Sadler also won the sixth race with 20-1 outsider Zuri Chop for a $42 payoff.

Santiago Gonzalez had a saddle double, aboard Perfect Pic at $12.20 in the fifth and Buzzer Beater at $4.20 in the eighth.

TYLER BAZE (Accelerate, winner) – “I’d worked this horse last week and he went real well. In the paddock today, John (trainer John Sadler) and I agreed that we weren’t going to let anyone get away with anything today. We were going to be right there with this horse. They made me work a bit for it today, but he was up to it. He’s maturing; getting better and better. With him, the best is yet to come”

MARIO GUTIERREZ (Semper Fortis, second) – “He ran well today. If he’d had another race under him, I think he really would have been dangerous today. I think he’ll run on, too.”

FLAVIEN PRAT (Taman Guard, third) – “I wish I could have ridden him like I wanted to. He was getting out on me all the way around. But he has lots of speed and lots of talent. He’ll get it figured out.”

JOHN SADLER  (Accelerate, winner) -- “When we put him around two turns he turned into a different horse. He won impressively, as good a win as any we saw early in the meet. For him to make a turn around and win again was really neat.  I was concerned about the No. 10 post, but then there were four scratches and we wound up with a good post. He’s a nice little horse and getting better and hopefully we knock off another win in the Los Al Derby, although I’m not sure of the spacing for that race.”

The stakes win was the second of the meet for rider Baze, but his first in the newly renamed Shared Belief (previously the El Cajon) Stakes. He now has 27 stakes wins at Del Mar.

The stakes win was the third of the meet for trainer Sadler and his second (Cindago in 2006) in the newly renamed Shared Belief Stakes. He now has 55 stakes wins at Del Mar, sixth most all time.