Able to 'pour in' to racing stables, Kumin loaded with champs 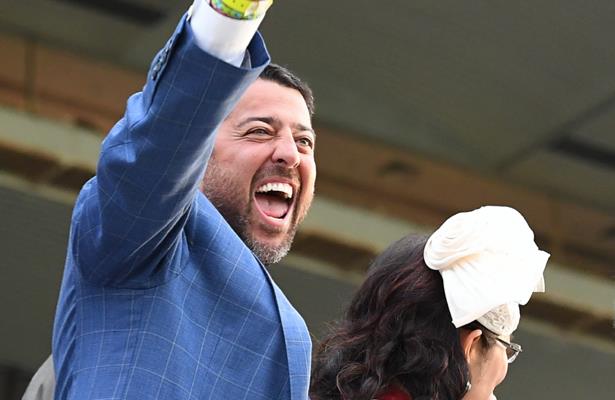 Sol Kumin described it as “a bummer” when he received news in recent days that the 3-year-old filly British Idiom had a bone chip requiring months away from the races. The development likely puts her out of contention for the Sept. 4 Kentucky Oaks.

“But you do right by the horse and hopefully you have something else ready to fire when that one’s recovering,” Kumin said.

In recent seasons, and especially this one, that has been the case for the 45-year-old from Massachusetts. It’s simply next champion up for his arsenal of horses with Kumin showing a penchant for buying into rising stars at the right time or, thanks to established partnerships, now being part of it from the beginning.

Any from that older trio could have been retired by now, of course, given what they'd be worth in the sales ring as a broodmare prospect.

“With the core guys I’m partnered with, we’re generally racing-first,” Kumin said. “That group of Mike Dubb, Bob LaPenta, the Elkstone Group — we all do this because we really enjoy the racing. As long as the horse is doing well, our goal is generally to bring them back, and we’ll be patient.”

So the group campaigning Monomoy Girl, who didn’t run in 2019 due to a pair of physical setbacks, remained patient. She returns to the races Saturday at Churchill Downs in the 5-year-old mare’s first start since winning the 2018 Breeders’ Cup Distaff.

Uni, who beat the boys in the Breeders’ Cup Mile, was on the work tab until recently popping a splint. The 6-year-old will eye a summer return, perhaps starting with Belmont Park’s Just a Game (G1) when racing resumes on the New York circuit.

And Midnight Bisou, a close second to Maximum Security in the Saudi Cup, is back to working consistently toward a summer campaign of her own. It was majority owner Jeff Bloom who moved to pull the champion from the Fasig-Tipton sale late last year.

“But he knows we love racing,” Kumin said. “It was his decision knowing we would be very happy.”

The choice, made the morning of Breeders’ Cup Saturday, set in motion what may be a huge 2020 season for Kumin. British Idiom had the day before won the Breeders’ Cup Juvenile Fillies to lock up her Eclipse Award, and Uni surged in the Santa Anita stretch that afternoon in the Mile.

That only begins the list for Kumin’s partnerships as he campaigns horses under banners such as Monomoy Stables and Madaket Stables, among others.

“What else do we have that I’m excited about?” he asked himself.

For starters, there’s a pair of top Derby prospects. Kumin is part of the ownership group billing itself as “The Avengers,” combining forces with SF Racing, Starlight Racing and others to campaign colts with stallion potential.

Eight Rings’ rights were first sold to Coolmore after his victory last year in the American Pharoah Stakes (G1). Hill ’n’ Dale Farm will eventually stand Charlatan, the recent Arkansas Derby (G1) winner. Authentic gets his chance to show off next in the Santa Anita Derby (G1), and farms are already asking about him.

In addition to Monomoy Girl, Kumin’s top horses with Brad Cox include the Louisiana Derby (G2) winner Wells Bayou, who faded from the lead in another division of the Arkansas Derby but will get another chance on the trail. There’s also Warrior’s Charge, second in the Oaklawn Handicap (G2); he’s a candidate for Churchill Downs’ Stephen Foster (G2) or the Metropolitan Handicap (G1) in New York.

Across other divisions, Kumin is a partner in the hard-knocking sprinter Whitmore, recent winner of the Count Fleet Sprint Handicap (G3), as well as Mind Control, a Grade 1-winning 4-year-old biding his time at Belmont Park. Bowies Hero has won at the highest level on turf and will try to do so again for the Phil D’Amato barn in 2020.

One colt perhaps flying below the radar is Rockemperor, a Chad Brown trainee who came to the U.S. for finishes of third in the Belmont Derby (G1) and sixth in the Saratoga Derby over turf last season. He ran third off the bench in the March 21 Muniz Memorial Classic (G2) at Fair Grounds given a tough trip.

“But he’s a horse that we’re super excited about this year,” Kumin said. “I think he’ll be able to compete in some of those races like the Arlington Million and Manhattan.”

“…We have a lot of 2-year-olds,” Kumin added. “We’ve been lucky we’d had some good ones. If you have good ones, you’re able to continue to pour in a little bit.”