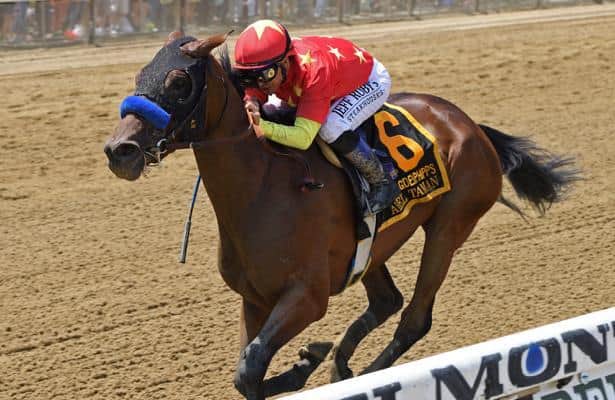 China Horse Club International and Clearsky Farms' Abel Tasman made her move early under Hall of Fame jockey Mike Smith and cruised to a 7 1/2-length win in the Grade 1, $750,000 Ogden Phipps Stakes for older fillies and mares on Saturday, Belmont Stakes Day, at Belmont Park.

The trainer-jockey duo of Hall of Famer Bob Baffert and Smith, who will be looking to lead Justify to the 13th Triple Crown in history later in the day in the 150th Belmont Stakes presented by NYRA Bets, saw what they hope is a harbinger of things to come when Abel Tasman won her fifth career Grade 1 race and captured the "Win and You're In" qualifier for the Breeders' Cup Distaff on November 3 at Churchill Downs.

"I am so proud of her. She's one of my favorite all-time horses," Baffert said. "Her race at Churchill Downs was a disappointment. She didn't run well. You could tell today the light got turned on. She couldn't have looked any better coming into this race."

Abel Tasman, who won the Grade 1 Acorn in her last appearance on Big Sandy on Belmont Stakes Day last year, settled early behind pacesetter Ivy Bell, who went the opening quarter mile in 23.58 seconds. Smith made the move early, sending the even-money favorite to the front before the half-mile mark, and Abel Tasman led the six-horse field with the half in 46.36, three-quarters in 1:10.05 and the mile in 1:34.25.

"She had a little slip at the break but then I could tell she was really on the bridle," Baffert said. "When she went up there and made the lead on her own, it was good because she was running her race."

The 4-year-old Quality Road filly kept the lead coming out of the turn and pulled away from a challenging Ivy Bell in the stretch under a hand ride, completing 1 1/16 miles on the fast track in 1:40.36.

"Today I was able to let her get into stride, and she really loves this surface here, too," Smith said. "She loves Belmont Park. Some of her best races have been here, and even last year was just incredible over this track."

The first of six Grade 1 races on Belmont Stakes Day, the 50th running of the Ogden Phipps was won by Smith for a second straight year after he guided Songbird to the winner's circle last year.

"You know her [Abel Tasman], she does that every time," Smith said. "She gets away slow and then she makes that big middle move. Sometimes it's better to let her do it, if they're going slow. If they're going fast and she does it, that's when I've gotten myself in trouble and that's happened before. But they were going easy enough that it was OK. She was happy, very comfortable, very happy. I was happy."

"I tried to dictate the pace, but with those fractions - they were really, really fast - I backed up a little bit and tried to earn my place," said Ivy Bell's Hall of Fame jockey Javier Castellano. "For the first time going long, she stayed on really, really well."

Added Pletcher: "[Ivy Bell] made what, initially, appeared to be an easy lead, and then Abel Tasman put in that big run down the back side, so Javier just sat patiently on her. She kept on pretty well and I thought it was a pretty good performance. She was second-best on the day."