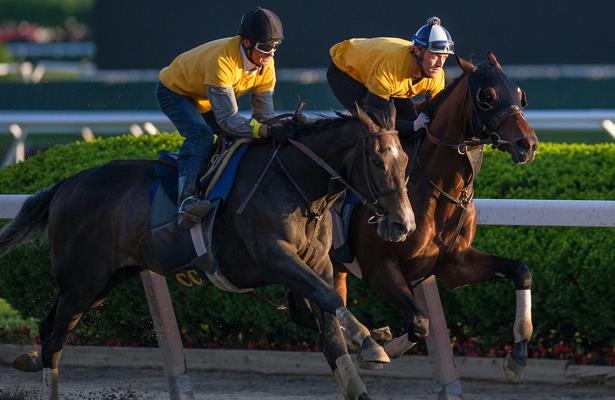 The Belmont Park main track opened for training Tuesday morning as horsemen continued preparations for a resumption of live racing and the opening of the spring/summer meet, which is currently on delay due to the COVID-19 pandemic.

Outriders and gate crew, outfitted in face masks and gloves, were on hand as the main track opened from 5:30 a.m. to 10 a.m. to complement the dirt training track which has remained in use throughout the suspension of live racing on the NYRA circuit.

"The main track is looking great. She was really floating over the track nicely," said Davis. "I kept her in the three-path and she was moving well the whole way around."

Davis, who currently has six horses in training, scored his first career victory as a trainer at last year's Belmont spring meet with Tiz Morning. The up-and-coming conditioner said Vineyard Sound, a horse he claimed for $16,000 on March 6 at Aqueduct, could be the one to get him back to the winner's circle at Belmont Park.

"I think highly of Vineyard Sound. He has five starts in 2020 and three wins. I had him entered in a starter allowance before we had to stop racing," said Davis. "He seemed to be on the up when I got him, but I'm happy I've got to spend some time with him before we start racing. I'm hoping we'll get an indication of a return to racing soon."

"I took one set out this morning. The track looked good and tight to me. I know they've done a lot work to it to get it ready," said Begg. "We'll have a few horses ready to breeze over it soon enough."

Blair Golen, the Belmont-based assistant to George Weaver, accompanied three horses to train over the 1 ½-mile main track on Tuesday including Boom Boom Kaboom, Desbordes and Escape, who earned a 90 Beyer Speed Figure last out in a March 13 allowance sprint at the Big A.

"It was good to be back out there," said Golen. "Escape jogged and the other two horses galloped. For now, we don't want to over train them until we have a race to point for.

"The horses are really able to relax out there so much more on the main track," added Golen. "You can go out there and not be passed by anybody. I'll start out on the main track and leave off the training track and it lets the horses relax and gives them a little something different to look at."

A number of safety initiatives have been implemented at the Elmont oval by NYRA's COVID-19 Preparedness and Response Plan Committee to ensure the safety of the essential staff that live and work on the Belmont backstretch.

The Committee is comprised of key NYRA staff members as well as representatives from the New York Thoroughbred Horsemen's Association, the Backstretch Employee Service Team and the New York Race Track Chaplaincy of America.

Golen said veteran trainer Rick Schosberg, a member of NYTHA's board of directors and the Chair of NYTHA's Aftercare Committee, has done a great job in communicating the protocols to his fellow horsemen that include daily temperature checks, mandatory face masks, gloves and social distancing.

"Rick Schosberg has done an amazing job helping out with the backstretch workers and the aftercare program," said Golen. "Being a trainer he understands our struggle every day."