'A little crazy': Interest pours in for Sackatoga Stable 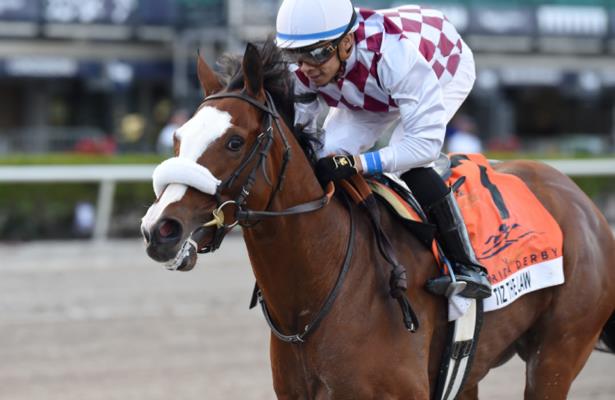 Sackatoga Stable, a modest group that started at a backyard barbecue in upstate New York and went on to own Funny Cide and now Belmont Stakes-winning Tiz the Law, is expanding. Well, relatively speaking.

Managing partner Jack Knowlton, who famously arrived at Churchill Downs in a yellow school bus when New York-bred gelding Funny Cide pulled a stunning upset in the 2003 Kentucky Derby, could fill a good number of rickety buses in the future as potential investors line up.

Fans who always yearned to own a racehorse are thinking, if Sackatoga can catch lightning in a bottle twice, why not three times?

Sackatoga acquired Derby and Preakness winner Funny Cide for $75,000 in a private purchase in March 2002. He became the first New York-bred to bring home the roses in the Derby. He was the first gelding to do so since Clyde Van Dusen in 1929.

Given that Sackatoga focuses strictly on New York-breds, limits its spending and typically maintains only a few horses at a time, there was no reason to believe it would ever hit the Triple Crown trail again. And yet there was Tiz the Law, storming home last Saturday in the Belmont, the 1 1/8-mile opening leg of the Triple Crown in a world turned upside down by COVID-19.

“We’ve proven twice you can get a heck of a horse for not a lot of money and they can be New York-breds,” Knowlton said proudly.

That has led many would-be owners to reach out through the stable’s website to inquire about hopping onto the bandwagon. In response to that keen interest, Sackatoga recently added two racing prospects, a colt that was purchased privately from Florida-based Nick De Meric and a filly acquired at the Ocala Breeders’ Sale for 2-year-olds. Both are by former Jim Dandy winner Laoban, a son of Uncle Mo that stands, of course, in New York.

Knowlton said he and Barclay Tagg, the trainer who doubles as a bloodstock adviser with assistant Robin Smullen, will scrutinize the offerings at Fasig-Tipton’s Midlantic Two-Year-Olds in Training Sale at the start of next week in Timonium, Md., with the hope of adding another juvenile. The managing partner said he has 15 new investors who are committed to proceeding.

In addition to Tiz the Law, who stamped himself beyond a doubt as the leading 3-year-old with his rousing Belmont triumph, Sackatoga also campaigns three other horses. Two-year-old colt Blitz to Win is recuperating from a stall accident. Three-year-old filly Adriatic Holiday still seeks her first victory. Accomplished four-year-old Niko’s Dream comes off an allowance victory at Gulfstream Park and is being pointed toward a stakes race for state-breds.

Knowlton, who lives in Saratoga Springs, N.Y., is unwavering in his commitment to the New York breeding program. He noted that there are abundant opportunities to compete for large purses in allowance and stakes races. In the past, New York-breds have slipped beneath the radar at sales.

“Historically, at least, New York-breds have not captured the attention of buyers the way Kentucky-breds have,” he said.

Sackatoga has certainly evolved since Knowlton and five high school buddies from Sackets Harbor, N.Y., after consuming an ample amount of beer at a summer cookout in 1995, decided to each kick in $5,000 and purchase their first horse.

Lew Titterton, a longtime friend of Knowlton’s, is the lone holdover from the Funny Cide group among 35 giddy Tiz the Law stakeholders who hail from 12 states. Some Funny Cide partners died. Others moved in different directions.

Knowlton, 73, is more involved in the operation than ever after devoting much of his time to his health-care consulting firm. “I’ve got to be honest, doing horses is more fun,” he said. “I’m happy to gear down a bit on the health care side and pick up more on the racing side.”

That does not mean that Sackatoga is embarking on a dramatic expansion.

“You look at the Little Red Feathers, West Point Thoroughbreds – that is never going to be who we are,” he said. “They’ve got major expenses and major staff and all of that. I’d love to be in a position where we have eight horses.”

Although Sackatoga is in position to raise significantly more capital than ever before, Knowlton has no intention of altering his conservative approach to the sales. He treats every dollar as if it is his own.