'A funny horse,' Nolo Contesto gets a shot at Del Mar Derby 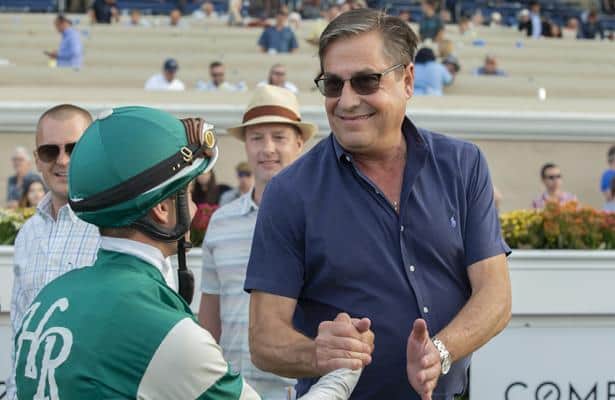 La Jolla Handicap (G3) winner Kingly, a full brother of Mohaymen trained by Bob Baffert, drew the outside post position in a field of 10 for Sunday’s Grade 2, $250,000 Del Mar Derby, the climax of the summer meeting’s turf stakes series for 3-year-olds.

The Derby, at 1 1/8 miles, follows the opening-day Oceanside Stakes won by John Sadler-trained Jasikan, and the 1 1/16-mile La Jolla on August 4.

Sadler has a newcomer to the circuit this time in Nolo Contesto, a Kentucky Derby prospect early in the year who will be making his second start on turf.

“He’s a funny horse,” Sadler said Thursday morning. “We think he outran himself the second time out when he beat Omaha Beach and it has taken a while to come back around.

"He didn’t like the track at Churchill Downs"  when last of seven in the Matt Winn (G3). "We’ve been pleased with him since he’s been here.”

The son of Pioneerof the Nile was a fast-finishing second, beaten a head by Carnivorous in a mile allowance on August 11 in his first start on turf. He worked five furlongs in one minute flat on Monday, the fastest of 54 horses clocked at the distance that day.

“He’s got a ton of ability, it’s a question of putting it together,” Sadler said.