A Toast to You Springs Downhill Upset 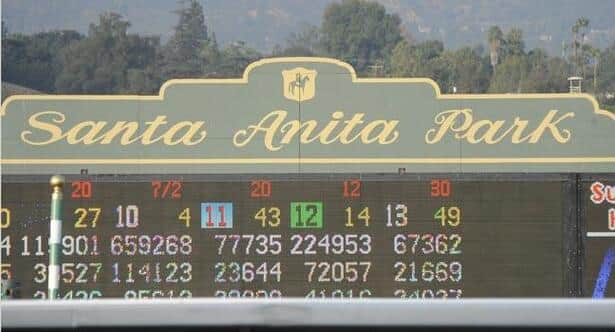 Longshot A Toast to You was up to win Saturday’s $100,000 California Flag Handicap by a half length under Mario Gutierrez, providing trainer Peter Miller with his third win of the day as the 4-year-old gelding by Tribal Rule negotiated the 6 ½ furlong hillside turf course in 1:11.88.

Fifth, beaten two lengths down the hill in a $40,000 claiming affair Oct. 5, A Toast to You was winless from eight starts this year and was ridden for the first time by Gutierrez.

With Atta Boy Pete and 3-1 second choice Strong Wind carving out fractions of 22.12, 43.16 and 1:05.98, A Toast to You was fifth, three lengths from the lead as the field crossed the dirt at the lane and were able to overhaul 5-2 favorite Ain’t No Other 30 yards from the wire to gain the win.

“We tried to put a little pressure on early, but he (Julien Leparoux, on pace-setting Atta Boy Slew) blew by us so we didn’t have any choice,” said Gutierrez.  “Peter told me to get a nice position and to save ground…and that if I had to make a late run, I was going to have to go wide…It’s easy when everything goes your way, and this horse is easy to handle.”

Favored Ain’t No Other got a similar stalking trip under Rafael Bejarano and finished second, 1 ¾ lengths in front of late-running Tiz a Minister and paid $4.80 and $3.00.

“My horse tried, he was running well and he wasn’t tired,” said Bejarano.  “He gave me a big kick, but that other horse was just flying.”

Tiz a Minister, off at 11-1 with Martin Garcia up, finished a nose in front of Circa’sgoldengear with Victor Espinoza and paid $6.80 to show.

Santa Anita will present a nine-race card on Sunday.  The $70,000 Uniformity Stakes, carded as race eight, will serve as the afternoon’s featured event.