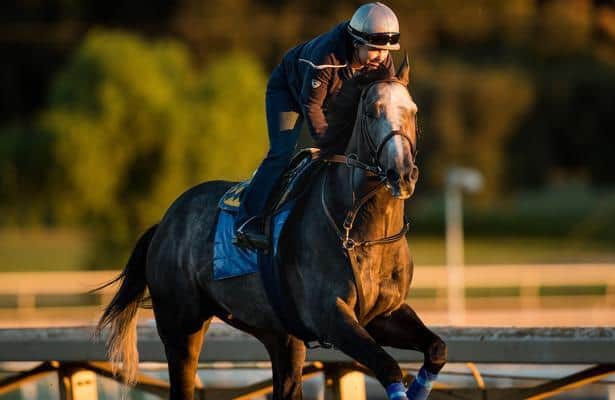 On a normal day at the track, a horse’s workout is nothing more than a date, time and ranking, with little context about what connections were seeking to accomplish in the drill.

It’s the opposite for some of North American horse racing’s most scrutinized stakes, the Breeders’ Cup championships, and these year we’ve had the luxury of seeing a number of works heading into this weekend’s races at Del Mar.

Before placing your bets, consider these works that stuck out to us at Horse Racing Nation:

Arrogate’s inability to catch and pass his workmate, Uninvited, came the same day as connections announced the Classic would be his final race before heading to stud. Some took that as more than a coincidence, fueling speculation he wouldn’t enter and run in the Classic. Stay tuned, however, for more on the Big A.

In company with stablemate Drefong, Mor Spirit didn’t come close to keeping up. Trainer Bob Baffert has worked Mor Spirit exclusively from the gate leading up to the Breeders’ Cup Dirt Mile. Un-raced since a 6 1/4-length Met Mile win back in June, Mor Spirit will be backed by those leaning on his reputation for showing up bigger on race day

Many of those opinions changed over the two following weeks as the champ seemingly regained his will to run. Baffert opened up about running his horse too soon back from a Dubai World Cup win. His ranging stride back in place, Arrogate’s question mark now is whether he’ll run better at Del Mar.

#Arrogate worked 7F in 1:25.40 @santaanitapark in advance of the @BreedersCup Classic!

The defending Breeders’ Cup Sprint winner will go into this year’s race a heavy favorite to win it again. Works like this one — in addition to a solid record in the afternoon — are the reasons why. This was one of the top breezes put in by any horse leading into the championships.

#Drefong worked 4F in :46.80 @santaanitapark as he prepares for a title defense in the @BreedersCup Sprint!

Here’s another case of a horse building plenty of hype in the mornings. Unique Bella’s a 9-5 favorite even while stepping up to Grade 1 competition for the first time and in her second start following a layoff. But the ease of which she covered these five furlongs and managed to do it in 59 1/5 seconds indicates she deserves a short price.

It was at least a bit concerning to see the whip used in Stellar Wind’s final workout toward the Breeders’ Cup Distaff, a race in which she could go off as the favorite as her career winds down. Trainer John Sadler said the mare is simply a lazy workhorse. But those used to watching her drill said they never saw encouragement from the whip before this move.

Stellar Wind worked 5F in :59.80 at @santaanitapark as she gears up for the @BreedersCup Distaff! @johnwsadlerhttps://t.co/vCZgVVRYIS pic.twitter.com/uWU1QHAoDC