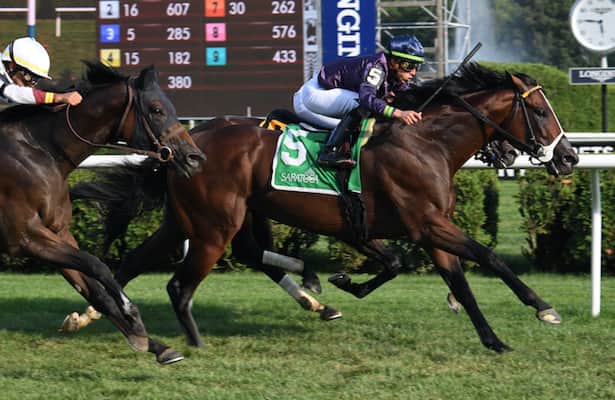 Six U.S.-based horses are among the world-class cast of 127 overseas entrants for the 2022 Hong Kong International Races on Dec. 11 at Sha Tin.

Trainer Wesley Ward led the way among the U.S. contingent, with three entrants for the Sprint - Grade 1 winners Golden Pal and 4-year-old filly Campanelle, as well as Arrest Me Red. One Timer, a 3-year-old Grade 2 winner trained by Larry Rivelli, also was listed as an overseas entrant for the Sprint.

A number of the U.S. entrants also are expected to compete in the Breeders' Cup on Nov. 5 at Keeneland.

Japan led the way in the overseas contingent with 63 entries, including dual Hong Kong Vase (G1) winner Glory Vase and fellow top-liners Salios, Songline and Panthalassa, while Australia has 15 nominations headed by Nature Strip, the top-ranked sprinter in the World’s Best Racehorse Rankings, as well as recent Everest winner Giga Kick and Eduardo.

Offering record prize money this year, entries for the four Group 1 features will be bolstered on Oct. 24 with the close of nominations for Hong Kong-trained contenders, likely topped by Golden Sixty, California Spangle, Romantic Warrior and Wellington.

Impacted by the COVID-19 pandemic over the past two years, the Hong Kong International Races continued under a closed loop system which allowed overseas-trained horses to successfully compete, including Japanese stars Loves Only You, Glory Vase and Danon Smash and Ireland’s Mogul.

Pyledriver, runner-up in the 2021 Hong Kong Vase, could clash with Tattersalls Gold Cup (G1) winner Alenquer, while top German stayers Mendocino and Sisfahan are also among the entries.

“We are delighted with the sheer quality and quantity of the international entry for 2022 Longines Hong Kong International Races," Andrew Harding, the Hong Kong Jockey Club's executive director of racing, said in a statement. "With the entry to be completed next week by the very best Hong Kong has to offer, we are extremely grateful to receive significant support from all quarters of the international racing community."