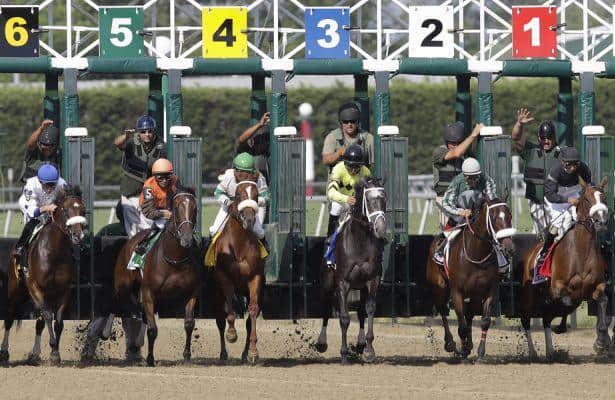 Wednesday should be a beautiful day at Delaware Park, and there are ample wagering opportunities to take advantage of on this eight-race program. Here are my top five plays.

No. 1 Nothingmakesense (5-1) was third against maiden claimers in her racing debut last September before finding both maiden special weight company and a stretchout in distance not to her liking the following month. She’s been laid off since then, but fits with these on the class drop and cutback while adding Lasix. No. 7 Mi Yayis (6-1) showed some early speed before tiring in her unveiling in the mud, may improve with experience over a fast strip. No. 8 Cherokee Party (5-2, morning-line favorite) has thrice been defeated while racing for a tag but lures Carol Cedeno on what should be a helpful turnback in distance.

No. 8 Vanhoofer (4-1) has run in the money in three straight dirt starts, but the speed figure he earned in his only turf start to date suggests the surface switch will work to his advantage. No. 3 Desert Lion (9-2) has caught a muddy track in each of his first three starts, watch the board for a clue as he makes his turf debut under Cedeno. No. 5 Temple Owl Liam (3-1, morning-line favorite) tries a new low and wisely scales back in distance – he’ll have top-notch pilot Jaime Rodriguez (11: 5-1-2 in his first week at Delaware) in the irons.

No. 6 Neigh Dude (5-2) won two straight with speed figures that make him the one to beat here before an ill-advised try going 1 1/16th-miles. That latest effort should be tossed, and 5-2 would be great value in his return to sprinting. No. 3 Stevethevandriver (9-5, morning-line favorite) takes a drop in class after finishing last of five in his second start since leaving the Jamie Ness barn. No. 4 That’s My Boi Toy (8-1) could be a factor for a piece if he runs back to his maiden breaker at Tampa Bay Downs in his first start against winners.

No. 3 Swing West (7-2) won three in a row last winter before going off form. He got some needed time off and cuts back to a five-furlong distance that should suit him well. Swing West also gets some weight relief with 10-pound apprentice Jeremy Alicea climbing aboard. No. 1 John’s Promise (5-2, morning-line favorite) has a 9: 3-4-0 record at this distance and a 13: 5-6-0 record at Delaware – must include. No. 6 Ellas My Love (9-2) was uneven over four starts in Florida this winter, but boasts a 7: 3-2-1 record over this course.

No. 7 Initforthelove (6-1) gets a tepid nod in this wide-open turf feature. He’s won three of his last four races at Tampa, albeit against cheaper. Initforthelove could come from far back or stalk the pace under John Bisono. No. 8 Unconquered Spirit (10-1) has never missed the trifecta in five lifetime starts on the lawn, with four of those coming at Delaware Park. The layoff is the question, but trainer Juanita Bennett wins at 20% with runners exiting a vacation of 90 or more days. No. 9 Palio (9-2) beat conditional allowance foes at Colonial Downs last July before hitting the bench. He stands to improve in his first start at four for trainer Michael Stidham, who names Jevian Toledo to ride.