5 races to watch: Contenders look to climb the ranks 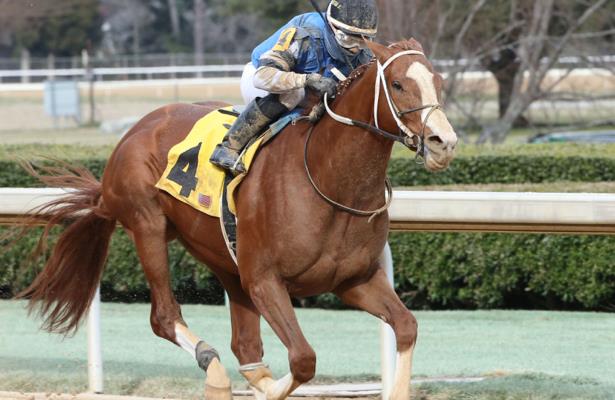 A slimmed-down racing schedule is on tap this week due to coronavirus with the lone Thoroughbred tracks in action being Gulfstream Park, Oaklawn Park, Tampa Bay Downs and Golden Gate Fields.

To get the week started, here's a closer look at five notable maiden and allowance races scheduled to be run Wednesday through Friday.

This six-furlong maiden event features a pair of Godolphin 3-year-olds in Sense of Justice and Positive Impact. Both will be making their sophomore bows.

Trained by Michael Stidham, Sense of Justice was a $350,000 yearling purchase at the 2018 Fasig-Tipton Kentucky July sale. The son of Street Sense has not raced since finishing third last July in a 4 ½-furlong maiden race at Parx.

Positive Impact, who also fetched $350,000 from Godolphin at the 2018 Keeneland September yearling sale, has not raced since finishing off the board in a Belmont Park maiden race last September. The son of Hard Spun is now with trainer Eoin Harty after previously being with Kiaran McLaughlin, who recently left training to serve as agent for jockey Luis Saez.

The 3-1 morning-line favorite is Sky Mischief, a $240,000 yearling purchase who has earned minor awards in three starts for trainer Michael Campbell.

This six-furlong, entry-level allowance for 3-year-old fillies has drawn an overflow field of 12. The 3-1 morning-line favorite is Misty Blue, a daughter of Competitive Edge who has already collected a pair of starter allowance wins during the current Oaklawn meet for trainer Mike Maker.

Dropping out of stakes company are Summer Fortune (10-1) for trainer Jeremiah Englehart and Raggedy Annie for D. Wayne Lukas. Raggedy Annie was most recently sixth in the March 7 Honeybee (G3) at Oaklawn, while Summer Fortune will make her first since finishing off the board in the black-type Warrior’s Reward Smart Halo Stakes at Laurel Park last November.

The lukewarm 7-2 morning-line favorite is Josie for trainer Brad Cox. By the Tapit stallion Race Day, who stands for $7,500, Josie fetched $105,000 at auction last year. She has hit the board in six of seven starts and this will be her second start off a nearly three-month layoff.

For 3-year-old maidens going 1 1/16 miles on the grass, this heat has attracted runners from some high-power outfits that have been forced to remain in south Florida given the halt in racing in New York and Kentucky.

Trainer Chad Brown entered Pricing Exercise, a $270,000 son of Palace Malice who was off the board on debut when going a flat mile on the lawn Feb. 22. He is the lukewarm 4-1 morning-line favorite in an oversubscribed field of 12.

Trainer Dale Romans will send out Bear Alley, who is 9-2 on the morning line. The son of Will Take Charge -- a $525,000 yearling purchase -- will try grass for the first time. Most recently, he led into mid-stretch before tiring late and finishing second in a maiden dirt race at Gulfstream.

Trainer Todd Pletcher will unveil Limetini, a $240,000 son of Tapiture; while Bill Mott will saddle Battalion, who’s been limited to minor awards in three previous starts.

At 1 1/16 miles on the main track, this maiden race for 3-year-olds also features horses from prominent barns. Or’effice will look to earn his diploma for trainer Mark Hennig after missing by just a half-length in start No. 3 at Gulfstream going nine furlongs on Feb. 15.

Brown will saddle Candy Machine, a $475,000 son of Candy Ride who was runner-up on debut when going six furlongs at Gulfstream Feb. 29.

Trainer Bill Mott will also unveil Mau Mau, a homebred son of Empire Maker for Emory A. Hamilton; while red-hot trainer Christophe Clement will saddle Wind Ridge, a homebred son of Tonalist for Robert S. Evans who was fifth on debut at Tampa Bay Downs on Feb. 8.

This second-level allowance going 1 1/16 miles on the grass features stakes-winning fillies Summering and Flor de La Mar. Glen Hill Farm homebred Summering will be making her first start since last August at Laurel Park for trainer Tom Proctor. The daughter of War Front won the Del Mar Juvenile Fillies Turf Stakes in 2018, but made just two starts a season ago.

Godolphin’s Flor de La Mar will be making her second start for the Harty barn after previously being with Bob Baffert. The daughter of Tiznow, who won last year’s Beverly J. Lewis at Los Alamitos for Baffert, was second in a Feb. 26 allowance/optional claiming event at Tampa Bay Downs in her first start for Harty.

This high-level allowance with a $100,000 optional-claiming condition is likely to produce a starter or two for the $600,000 Oaklawn Handicap (G2) on May 2. Principal contenders include Laughing Fox, who was most recently off the board in the March 14 Essex Handicap; Pirate’s Punch, who exits a third in the Grade 3 Mineshaft at Fair Grounds; and multiple stakes winner Gato Guapo for trainer Robertino Diodoro.