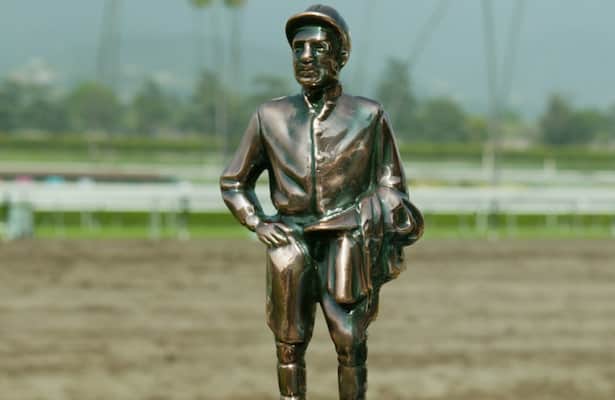 A distinguished group of five veteran jockeys have been selected as finalists for 2023 George Woolf Memorial Jockey Award, presented annually by Santa Anita Park since 1950. One of the most prestigious awards in American racing, the Woolf Award, which is determined by a vote of jockeys nationwide, can be won only once. After ballots have been tabulated, the 2023 Woolf Award winner will be announced in February.

Representing a broad cross-section of racing jurisdictions, jockeys Daniel Centeno, Javier Castellano, Terry Houghton, Edwin Maldonado and Willie Martinez soon will be considered via a vote of their peers. Except for Castellano, all other finalists will appear on the Woolf Award ballot for the first time.

The award is named in honor of the legendary late jockey George Woolf, who rose to national prominence as the winner of the inaugural Santa Anita Handicap in 1935 with Azucar and later as the rider of fellow Hall of Famer Seabiscuit, whom he rode to victory over reigning Triple Crown champion War Admiral in a nationally broadcast match race at Pimlico Race Course on Nov. 1, 1938. The Woolf Award trophy is a highly coveted replica of the life-sized statue which adorns Santa Anita’s Paddock Gardens area.

Affectionately known as “The Iceman,” Woolf was regarded as one of the greatest big money riders of his era and was revered by his fellow riders, members of the media and millions of racing fans across America as a fierce competitor and consummate professional.

A native of Maracaibo, Venezuela, Javier Castellano, 45, was America’s leading money winner and Eclipse Award winning jockey for four consecutive years, from 2013 through 2016, and was inducted in the National Museum of Racing and Hall of Fame in 2017.

Castellano rose to national prominence in 2004, when he guided the Frank Stronach-owned and -bred and Bobby Frankel-trained Ghostzapper to victory in the Breeders’ Cup Classic at Lone Star Park. Based primarily in New York, Castellano and his wife Abby have three children. The son of a jockey, Castellano has 5,582 career wins through Nov. 30. Married with three children, Castellano’s father-in-law is Terry Meyocks, who serves as the National Director of the Jockeys’ Guild.

A winner of a then Tampa Bay record 144 races at its 2007-08 meeting, Centeno has 3,203 career wins through Nov. 30 and currently rides a circuit that includes Tampa Bay Downs, Laurel Park, Pimlico, Monmouth Park and Delaware Park. Most recently seventh at Delaware with 39 winners, Centeno is engaged to Brooke Sillaman and has a daughter named Jazmyn.

Despite horrific injuries in recent years, Terry Houghton, a 52-year-old Denver native, is still going strong with more than 6,000 career victories to his credit. A long-time mainstay in Michigan and at Tampa Bay Downs in Florida, Houghton got his 6,000th career victory at Thistledown on Sept. 15, 2020 and had 6,135 career wins through Nov. 30.

A leading rider at the now-shuttered Detroit Race Course from 1995 until its closing in 1998, Houghton won 300 races per year on four occasions from 1995 to 2001 and also garnered leading rider titles at Tampa Bay Downs, Mountaineer Park, Pinnacle Race Course and at Mahoning Valley Race Course.

The son of a jockey, Houghton was sidelined for more than 15 months after a brain injury sustained in a spill in 2003. On March 1, 2014, Houghton sustained multiple breaks to a collarbone and a fracture of his T9 vertebra in a horrific spill at Mountaineer Park and was subsequently voted comeback rider of the year by the Jockeys’ Guild after his 2014-15 season.

On April 10, 2021, Houghton again was seriously injured as the result of a three-horse spill at Mahoning Valley that resulted in multiple facial fractures. Aided by his daughters Alyssa and Ashley, Houghton, who is one of only seven active jockeys with more than 6,000 wins, made a full recovery and is back in the saddle again.

A Southern California regular since 2010, Edwin Maldonado, who turned 40 on Dec. 1, appears poised to have perhaps his best year as a jockey as a result of hard work, positive thinking and staying injury-free. Unusually tall for a jockey at 5'8", Maldonado, a native of Columbus, Ohio, broke his maiden at age 18 at Assiniboia Downs near Winnipeg, Canada, in August 2001.

In 2012, Maldonado displaced perennial kingpin Martin Pedroza as that year’s leading rider at the now-shuttered Fairplex Park meeting. He then took the Hollywood Park fall meet title and went on to tie with Rafael Bejarano as Hollywood Park’s leading spring/summer rider in 2013.

But a serious injury sustained in a morning training incident at Del Mar later that summer derailed his rise to the top as he was sidelined for more than six months and had difficulty regenerating what had been a growing customer base.

The road back has been long and hard for Maldonado, who has long been regarded as the top “gate rider” on the circuit. But with his first Grade 1 victory coming this past Oct. 1 aboard the Bob Baffert-trained Defunded in the Awesome Stakes at Santa Anita, Maldonado, who recently hired veteran agent Tom Knust, is quick to credit his psychological approach as a key factor in his resurgence.

“Your thoughts are very powerful and writing down goals, thinking about what you want instead of focusing on the negative,” said Maldonado in a recent interview with Art Wilson of the Southern California Newspaper Group. “One of the things I wanted was to win a Grade 1 and I said, ‘OK, this is going to be one of my goals.’ … I’d been riding for 20 years and I hadn’t won a Grade 1, so accomplishing that was very exciting.”

Nicknamed “the candyman,” Maldonado is one of the most popular riders on the circuit and with 1,456 career winners through Nov. 30, he said he’d like to continue riding for another 10 years.

Puerto Rico native Willie Martinez, respectfully known as “chilly Willie” in acknowledgment of his unflappable demeanor in the heat of battle, brings an outstanding career resume to the 2023 Woolf ballot that includes a record nine riding titles at Northern Kentucky’s Turfway Park.

Born March 3, 1971, Martinez emigrated to the U.S. in 1988 and began working as a hotwalker and groom at Finger Lakes Race Track in Farmington, N.Y. Quick to transition to the saddle, Martinez bagged his first winner in 1989 at Tampa Bay Downs.

A winner of seven races in one day at Turfway in 1993, Martinez also has won riding titles at Ellis Park, Tampa Bay Downs, Keeneland and Hialeah.

A winner of 3,606 career races, including 150 stakes, Martinez also has sought to promote jockey rights, speaking out on issues such as health insurance, the scale of weights in various racing jurisdictions and other issues.

Ranking high among Martinez’s 38 career graded-stakes wins is his victory in the 2012 Breeders’ Cup Sprint at Santa Anita aboard long shot Trinniberg, who paid $29.40 to win.

Last year’s Woolf Award was won by Joe Bravo, who became the 73rd Woolf recipient, dating back to the inaugural winner in 1950, Gordon Glisson.