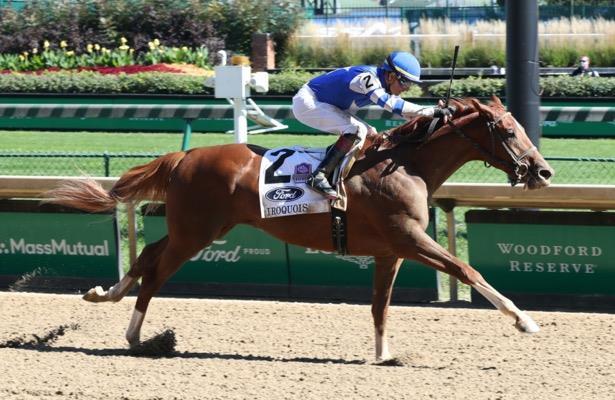 "And Arazi runs right by him!" "This is unbelievable!"

For those of us watching Arazi win the 1991 Breeders' Cup Juvenile, and Zenyatta capturing the 2009 Breeders' Cup Classic, we will never forget the words uttered in the race calls of legends Tom Durkin and Trevor Denman, respectively.

In addition to those two memorable performances, several other horses over the years have used strong late moves to success in the Breeders’ Cup World Championships, including but not limited to Arcangues, Drosselmeyer, and Royal Academy.

There is nothing like a superstar closer flying down the lane to get the heart pumping, especially if you have some money on the ine. Are there any such late movers in the 2020 Breeders’ Cup?

Here we will look at five late runners most likely to make a strong impact in the Friday and Saturday Breeders' Cup races at Keeneland.

This 5 1/2-furlong turf dash is loaded with front-end speed, and Cowan might be the major beneficiary. Steve Asmussen’s $185,000 Keeneland sales graduate battled on the pace in his first two dirt sprints, but after adding blinkers in his last two turf sprint starts, he closed ground both times. Cowan rallied to finish a clear 2nd in the Indian Summer Stakes at Keeneland Oct. 4, and he was six lengths clear of the show finisher. He was gaining on the winner late last time and should get plenty of pace to chase in the first Breeders’ Cup race of 2020.

Sittin On Go is a perfect two-for-two for Dale Romans, and he looked good rallying from next-to-last to win the Iroquois Stakes (G3) at Churchill Downs on Sept. 5. That was the first Kentucky Derby 2021 points race, and he sweetly pulled away late in that one-turn mile event. I don’t know if he has an Arazi-like move in him, but if Jackie’s Warrior and one or two others mix it up early, the son of Brody’s Cause can definitely make some late noise.

The pace almost has to be rapid with Gamine and Serengeti Empress vying for early supremacy. If a pace duel does materialize, there is a good chance that Sconsin gets involved late.

The rapidly developing sophomore daughter of Include did not get a ton of pace help in many of her starts this year, but she managed to crack the top three in each of her last four starts and won two of those races convincingly. One of those wins was at this seven-furlong distance in the Eight Belles (G2) at Churchill Downs on Sept. 4, where she blasted past multiple stakes winner Four Graces to turn the tables on that one. I like the steady speed figure progression and those numbers jumped up nicely in her last pair.

Late runner Owendale has not been doing much stretch running recently. He got no pace help in his last three starts, and he actually attended the pace in his last pair, landing the place in the Alysheba (G2) and Pimlico Special (G3).

The race flow here could be much more to his liking, and he figures to revert to the patient tactics that saw him storm home from last-to-first in the Blame Stakes at Churchill Downs earlier this year. He captured his lone local outing and won both of his previous attempts at one mile.

Sistercharlie won the BC Filly & Mare Turf in 2018 and was 3rd last year. She made a determined, sustained run when she won it under the Twin Spires two years. She has dropped three straight, finishing 3rd each time, but there are some things to like.

The Diana (G1) at Saratoga on Aug. 23 did not set up for her and she sports two turf bullets for this, and she won the Beverly D (G1) twice at this mile and three sixteenths distance. Sistercharlie is one-for-one at Keeneland and she runs well fresh, and Chad Brown’s mare might be able to dig deep and come up with another championship performance.