5 Breeders' Cup long shots we are looking forward to betting 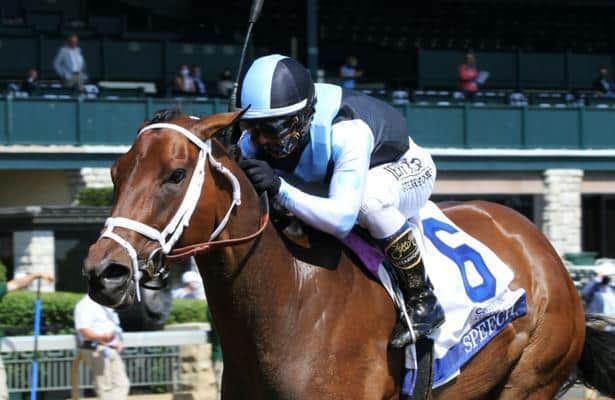 It can only take one long shot to make the day of a bettor in the Breeders' Cup. Picking a horse at a nice price to win is everyone's goal, but finding value underneath in exotic wagering can be just as valuable and profitable.

Our team highlighted five horses at square prices that should be included in all your 2020 Breeders' Cup wagers.

This is one of the top three Super Screener long shot plays on the day. He exploded in the stretch in a key prep for this race, the Grade 1 Shadwell Mile, swooping by Raging Bull for the win. He can come right back with a better effort here. Gets the first jump on closers as they hit the short stretch. Very tactical. A really dangerous long shot.

Get Mike's take on all 14 Breeders' Cup races —with his rankings and wagering strategies — in the Super Screener. It's available now - get a head start on a big BC score!

Ollie’s Candy is winless in five outings this year and she hit the board in all of those races, including a trio of runner-up finishes in the grade one ranks. The former Grade 1 winner got acquainted with the Keeneland main track in a clear runner-up finish in the Spinster (G1) on Oct. 4, and she fired a bullet at the Lexington oval Oct. 24.

Her best race of the season was the Apple Blossom (G1) at Oaklawn Park on April 18. In that event in the spring, she dueled through wicked fractions, opened up in the lane, and was run down in the final jumps by perfect trip stalker Ce Ce. That was a fantastic effort and she lost nothing in defeat.

She is going to have to run the race of her life in the Distaff against the likes of Monomoy Girl and Swiss Skydiver, and she figures to be every bit of 10-1 or higher. The aforementioned favorites will be tough to beat, but my live long shot has a very good chance to finish somewhere in the top three at square odds.

Most years a horse as talented as Tom's d'Etat would be under 5-1 in the Classic, but with the depth of the Classic this year, he could wind up in the 8-1 to 12-1 range. That is outrageously high for a horse who has run 9 straight races with a Beyer Speed Figure of 101 or higher.

He was in as good as form as anyone heading into the Whitney. He defeated Improbable with an impressive turn of foot in the Oaklawn Mile and dusted By My Standards in hand in the Stephen Foster. He ran extremely well given the circumstances in the Whitney.

After completely blowing the start, he was last behind a slow pace and did well to lose by less than three lengths to the suddenly red hot Improbable. The Al Stall Jr. trainee is consistent, has a win over the track, and has the versatility to sit a good trip in a race filled with horses with similar pressing styles.

This 7-year-old could wind up as the fifth choice in the Classic, but he is a strong win candidate and will not be worse than second.

Because of the expected fast pace and long shot odds, Speech is one filly to give serious consideration to in the Filly & Mare Sprint. As stated before, Serengeti Empress, Gamine and Venetian Harbor all want the lead. Even if their pace figures are somewhat varied and suggest a lone pacesetter in Serengeti Empress, it is almost certain that each of their connections will direct the jockey to send hard. With early fractions of 21 and 43/44 and change possible, it sets up for a closer.

At first glance, Bell’s the One is the most obvious closer to use as she did mow down Serengeti Empress in the Derby City Distaff (G1) at Churchill Downs. She is usable if bettors want the safe choice for a late closer who owns success on this track. However, Bell’s the One’s odds are not overly appealing as the expected third or fourth choice. In contrast, Speech is trading around 20-1 overseas despite also notable class as the local Ashland Stakes (G1) winner over Venetian Harbor and a stalking or closing style in sprints. Cross off the recent fourth in the Kentucky Oaks.

During live wagering, Speech is a fair deal at 10-1 or higher, and an overlay at 20-1. Give Speech a long look in the Filly & Mare Sprint, at least as a second option. As with Bell’s the One, all Speech needs is pace to make her presence felt in the lane.

I'll continue with the theme of the Filly and Mare Sprint. With Serengeti Empress setting a blazing pace, this will compromise other speed and presser types like Gamine, Frank's Rockette (her first preference is the Sprint), Inthemidstofbiz and Venetian Harbor.
Of the closers, Bell's The One and Come Dancing come in off impressive wins, but both closed into blazing half-mile paces of :43.77 and :43.81 respectively, perfectly setting up their late runs.  In addition, long shot closer Sally's Curlin benefitted from the same pace that Bell's the One did.
But the 3-year-old filly Sconsin closed impressively off a more moderate half-mile pace of :44.14 in a small five-horse field. In fact, the chart notes "roused 3/8, angled out, engulfed leaders, cleared." She will likely be overlooked coming in off only a Grade 2 win against 3-year-old fillies in a small field, and should close strongly at a huge price.
I would plan on playing Sconsin in exactas under both Serengeti Empress and Speech, and also playing Sconsin to win.
For me, the one real unknown is Speech, who looked dynamite winning the Ashland (G1) at Keeneland in July, but then disappointed running a non-competitive fourth in the Kentucky Oaks.  But all of her stakes experience is in routes and she will likely be overbet as bettors look for alternatives to Serengeti Empress and Gamine.  Either way, a Speech - Sconsin exacta will cover in the event Speech runs big and Sconsin runs second.
Ivar Speech Sconsin Tom's d'Etat Ollie's Candy Breeders' Cup Breeders' Cup Distaff Breeders' Cup Filly & Mare Sprint Breeders' Cup Classic Breeders' Cup Filly & Mare Sprint (2020) Breeders' Cup Distaff (2020) Breeders' Cup Classic (2020)