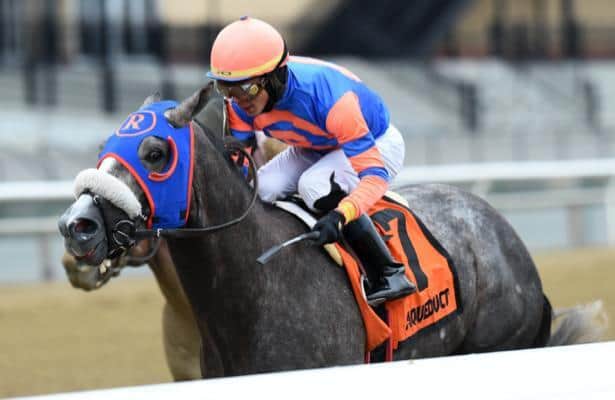 The NYSSS Great White Way and Sunday's NYSSS Fifth Avenue for juvenile fillies, both contested at seven furlongs on the main track, are the richest sire stakes races in the country with purses of a half-million each.

Trained by Rudy Rodriguez, an eight-time leading trainer at the Big A, Dream Bigger arrives at the Great White Way off of a pair of victories against his Empire State-bred counterpart. Prior to a victory in the Notebook on November 17 at Aqueduct, he romped by 10 ¼ lengths in the New York Breeders' Futurity on September 20 at Finger Lakes, which was his first career victory. Dream Bigger made his career debut at Saratoga Race Course, finishing second by 4 ¼ lengths to subsequent Grade 1 Champagne victor Tiz the Law.

A son of Sequel Stallions' Mission Impazible, Dream Bigger worked five furlongs in 1:01.07 over the Aqueduct main track on December 5 in preparation for Saturday's race.

"This was our main goal and so far he's coming into the race really well. He had a good breeze," Rodriguez said. "We're hoping for big things, but New York has such a good program. We're trying to keep him against New York breds and run for as much money as we can. If things happen and he starts getting better, we can throw him into deeper water."

Rodriguez said a good result on Saturday would allow the connections to consider a start against open company.

"We definitely want to point to some spots outside of New York-breds as well, but we have to get this race out of the way, see how he comes out of it and talk to the owner and see if he wants to freshen him up a little bit," Rodriguez said. "There's good racing for him coming up. He's a strong young horse and they paid a large amount of money for him so hopefully he runs well."

Purchased for $200,000 from the Ocala Breeders' Sales Company's 2-Year-Olds in Training Sale in April, Dream Bigger is out of the Sky Mesa broodmare Downtown Daria.

Owned by Team Hanley, Captain Bombastic, bred by Chester and Mary Broman, arrives at the Great White Way 2-for-2. After winning at first asking going 6 ½ furlongs over the Belmont Park main track, he stretched out to a one-turn mile to win the Sleepy Hollow by a narrow margin over stablemate Cleon Jones.

The son of Forty Tales has worked two bullets heading into Saturday's race, the most recent of which was a half-mile drill in 47 seconds flat on the Big A main track.

Moonachie will seek to return to winning form having not found the winner's circle since an encouraging 10-lengths debut triumph on August 28 at Saratoga.

Owned by Bill Parcells' August Dawn Farm, the son of Central Banker, bred by McMahon of Saratoga Thoroughbreds and Dean Purdom, was a distant seventh last out in the Notebook and will receive the riding services of Jorge Vargas, Jr. from post 14.

Calumet Farms' Kierkegaard broke his maiden against open company outside of New York having won his two-turn debut over the Churchill Downs lawn on November 6.

Fresh off a successful weekend with wins in the Grade 1 Cigar Mile with Maximum Security and the Grade 3 Fall Highweight with Happy Farm, trainer Jason Servis will have representation with stakes-placed Bank On Shea and maiden claiming winner It's a Risk.

Owned by Shea D Boy's Stable and bred by Dr. Scott W. Pierce, Bank On Shea was a distant third in the Notebook last out, which came when emerging off of a four-month layoff. Bank On Shea broke his maiden on July 14 at Saratoga.

Bank On Shea will be ridden by Jose Lezcano from post 10.

Mr. Amore's It's a Risk takes a big step up in class after breaking his maiden for a $25,000 tag at Delaware Park. Bred by Copper Penny Stables, the son of Bellamy Road will depart from post 7 under Hector Diaz, Jr.

The Great White Way is slated as Race 8 on Saturday's nine-race card.