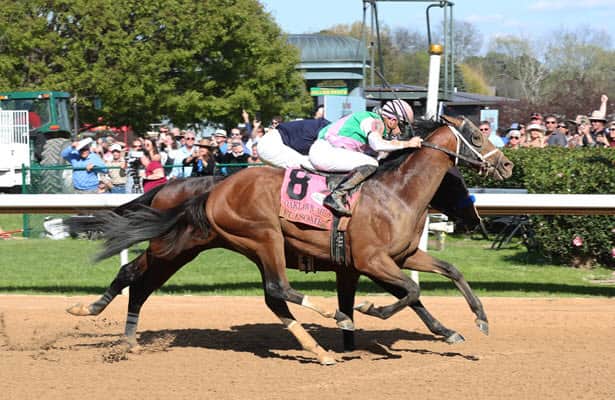 The weather forecast at Churchill Downs might look bleak for Kentucky Oaks Friday, but connecting on a few price plays could be enough to brighten any handicapper's day.

Below I take a closer look at four horses at 8-1 or higher on the morning line who will outrun their odds and have a legitimate chance of winning. These horses should be included in all vertical and horizontal wagers.

Race 7: #6 Fulsome - 8-1: Olympiad is a deserving favorite, but this underrated colt has the best chance of anyone in this field to defeat him. Two of his best races last year came at Churchill Downs in the Matt Winn (G3) and in the slop at Keeneland. He also owns a 3-for-4 record at the distance. I was impressed with his effort off a layoff in the Oaklawn Mile while running down Cezanne despite being shuffled back and going wide. He tipped his hand at a big upcoming campaign, and this might be the last chance to get a good price on this Brad Cox runner.

Race 8: #7 Beechnut Trophy - 10-1: She was much the best in the Sanibel Island Stakes last out when flying for the only 50 yards she was allowed to run. That was the first loss on the turf for this improving filly who has a wicked turn of foot. She will threaten Dolce Zel, who figures to be a heavy favorite in here for Chad Brown, in what appears to be a straightforward exacta box as long as this race remains on the turf.

Race 9: #9 Awake At Midnyte - 15-1: The Eight Belles has a variety of intriguing runners, but none more so than Doug O'Neill's filly. She defeated subsequent stakes winners Adare Manor and Under the Stars while sprinting on debut and earned a 90 Beyer Speed Figure when a close second to Under the Stars in the Santa Ynez Stakes (G2) in her only other sprint try. She disappointed in two subsequent Kentucky Oaks preps while routing, but she showed speed and made a middle move in both starts before backing up, further indicating that sprinting will end up being her best game.

Race 12: #4 Society - 8-1: This daughter of Gun Runner was able to win on debut at Keeneland for low profile connections. She has since been switched to Steve Asmussen. The 75 Beyer Speed Figure she earned as a 2-year-old puts her in the mix and it is easy to foresee further improvement while making her first start as a 3-year-old, first start for Asmussen, and first start with Lasix. She also is bred to love a wet track. She will be the biggest threat to the well-regarded Wish You Well.