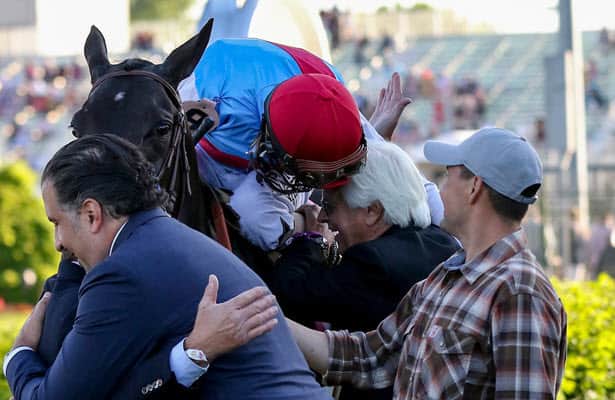 A couple of trainers wondered how much longer rival Bob Baffert can keep racking up medication investigations. Two others said he is the victim of a broken system.

The ripple of reaction to Kentucky Derby winner Medina Spirit’s drug positive widens. As it does, there was one thing on which D. Wayne Lukas, Graham Motion, John Shirreffs and Christophe Clément agreed. Racing itself – regulators, executives and horsemen – shares the blame for the time bomb that exploded Sunday when Baffert said Medina Spirit was inexplicably found to have an excessive trace of a legal anti-inflammatory drug in his system.

“We’ve got knee-jerk reactions,” said Lukas, the Hall of Famer with 14 classic wins who has spent most of his 85 years training horses. “We’re trying to appease the public. We’re doing a lot of things that absolutely, probably are not in our best interest of racing.”

“I would like to be optimistic about our sport, but today we are an embarrassment,” Motion said in a Tweet on Sunday. “Perhaps we have to hit rock bottom before things get better, but we only have ourselves and the leaders of our sport to blame. For anyone that loves the sport as much as I do, it’s a sad day.”

Baffert has had to answer five high-profile drug investigations in the past two years, successfully appealing three of them, with the current Kentucky Derby case still pending. If a second post-race sample shows Medina Spirit had too much betamethasone in his system, he would be stripped of his Derby win.

Motion, the winner of the 2011 Kentucky Derby with Animal Kingdom, has had only one minor medication violation in a three-decade training career, according to the Thoroughbred OwnerView database. There is only one minor medication reprimand on the 30-year record of Christophe Clément, who trained Tonalist’s victory in the 2014 Belmont Stakes. He said U.S. racing authorities have never been tough on violators.

“Too many times if they have a positive, they will have a small fine,” Clément said. “The horses run under the assistant’s name for a week or two, and then it’s back to business as usual. If we want to sustain and want for the next generation to look good, we have got to take a stand.”

Shirreffs, the winner of the 2015 Kentucky Derby with 50-1 long shot Giacomo and a 45-year training veteran, has no drug violations on his record, according to OwnerView.com. He said he is worried about a one-size-fits-all response to medication violations, both in the hodgepodge patchwork of rules across the country and in the public’s perception.

“Unfortunately in horse racing, they classify everything as a positive, no matter what the medication is,” Shirreffs said Sunday on a VSiN racing podcast. “They have the trainer insurance responsibility rule, which is very broad and covers anything that the horse may come in contact with. So you’re responsible when somebody comes up and, unbeknownst to you, gives the horse a little treat, or are they have some contamination in their hands or whatever. That’s always a worry, especially when you send a horse on the road, because you are no longer really controlling 100 percent of its environment.”

• Why it's unlikely that sabotage was involved with Medina Spirit

Baffert’s steadfast claim that he and his team did not give Medina Spirit any of the legal anti-inflammatory betamethasone is, however, a point of contention in the debate over whether he was a violator or a victim.

“Bob Baffert is a great trainer, we’re all aware of it,” Clément said. “What I don’t like is he had many positives over the last 30 years of his career. I don’t believe in many contaminations or in bad luck. Somewhere in his program there is a lack of discipline to avoid the positives.

“For Bob Baffert to come out and to say he is the victim, I don’t think he’s a victim. I don’t hear Shug McGaughey telling me that he is a victim of contamination and Chad Brown saying he is victim of contamination. I just think you have to be very disciplined about it. Most horsemen are very careful and very diligent. Some people, either themselves or the veterinarians they work with, just push the envelope a little bit.”

Lukas, who has one medication violation to his name, agreed that as long as third-party veterinarians are involved in giving what is thought to be legal medication to horses, the door is open for violations.

“If you turn all the medication over to only the vets, you still have this situation,” he said. “I know Bob didn’t give anything illegal. Bob and I are good friends, and I feel real bad for him. He’s very distraught over the whole situation. He’s innocent. I know that. He knows that. We’ve got to get to the bottom of it. There are no easy answers.”

Shirreffs agreed, adding that trainers are on shaky ground trying to administer legal medication such as betamethasone, which is supposed to be out of a horse’s system in two weeks. Sometimes the horse’s bloodstream does not get that message.

“This is about how a horse metabolized the medication that it receives in what was thought to be a good time frame,” Shirreffs said. “Sometimes the horse’s metabolism can be a little slow. It’s very difficult for the trainer. There are so many varying circumstances that could happen along the way.”

Lukas took it another step, saying it is too fine a line if medication violations come down to trillionths of a gram.

“Two picograms don’t enhance any horse’s ability,” Lukas said. “The biggest problem is we have to raise the threshold levels. That’s the biggest thing.”

Clément agreed that sometimes the current rules can turn into a game of “gotcha” for trainers who do not run afoul of the regulations very often.

“A few years ago, I think, Shug McGaughey had a positive or very benign drug in a small race in the Midwest,” he said. “He got a two-week suspension and a fine, and it was a joke. It was obviously a stable mistake. At the same time some people were having positives with a performance-enhancing type of drug, and they just got fined. There’s something completely wrong in the system.”

Injustices, inconsistencies and inconsequential penalties in the interstate patchwork of medication rules are among the problems that a new federal law is aimed at fixing. All four trainers say the Horseracing Integrity and Safety Act could cure some of what ails the sport when it takes effect in a little more than a year.

“It’s our only hope at this point,” Motion said in a text message. “Anyone who is not on board is part of the problem.”

“We got there because we were not able to police ourselves,” Clément said. “We had to do something. Hopefully that will be the answer.”

“In no other sport do the so called ‘good guys’ have to police their own sport,” Motion said in a Tweet. “Owners continue to support trainers who have positives. Either the sport is incapable of policing itself, or the punishments are not an adequate deterrent.”

Shirreffs was skeptical when asked whether government regulation will help racing.

“I think possibly it could,” he said. “Or it could be even worse. Unless there is really an open discussion from everybody and not just special interests, then I don’t think that we’re going to see a great improvement. If they take time to make a good decision instead of rushing to decisions and creating rules that will be hard to undo, that’s the big thing.”

“It can help if they have some horse-savvy people regulating it,” Lukas said.

In this month’s announcement of who will be on the HISA board of directors and committees to address medication and track safety, there was a mix of racing professionals, experts from other sports and politicians.

“I’m OK with that,” Clément said. “The bottom line is to be fair and to make decisions for the good of horse racing. I’m not sure you have to be part of horse racing to do what is best for the sport. You just have to be practical and have some kind of a vision.”

While these are big-picture responses, there is still the Kentucky Derby flashpoint to be addressed. Motion said that although the Medina Spirit case has given racing a black eye, it is not all about Baffert.

“I feel my comment on Twitter has been somewhat misrepresented in the media as being directed at Baffert,” Motion said. “It was more a general comment on the state of our industry. We have created this problem.”

It is a problem that reinforced a shady image for the sport, at least in the eyes of the general public.

“Here it comes again, especially in America’s No. 1 race,” Lukas said in a resigned tone. “There’s no dodging it. It has really not helped our sport.”

“Hopefully it’s something that the people involved and the general public or racing fans can get their minds around a little bit and understand that this happened not because Bob was trying to do anything wrong,” Shirreffs said. “There wasn’t anything nefarious going on. I just hope that people understand that.”

Even if there was agreement on that point, such understanding might be a big step for a sport that has made the news for a lot of the wrong reasons lately – from a rash of horse deaths at Santa Anita to a federal sting that took down two trainers last year to the game’s biggest human star who is one positive drug test from losing his record-setting seventh Kentucky Derby victory.

“It’s sad that again we’re going to talk about racing from the negative, not from the positive,” Clément said. “Medina Spirit was like a Cinderella story. The cheaper horse winning the Kentucky Derby. Unfortunately, you have got to work pretty hard to get back a positive, and it’s just very sad and very annoying that it happens on the biggest stage at one of the biggest racing events of the year. I am very disappointed, and I just hope that something good can come out of it.”