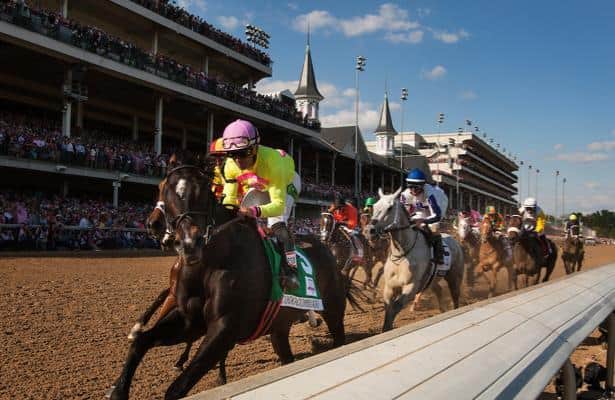 For me, one main attraction to superfectas is that a superfecta probable payout pool is not displayed, making this bet an unknown endeavor relative to an exacta and even trifectas in some circumstances where the probable payouts are available. However, if you observe the pool results over a long period of time, you will come to realize the heavily wagered upon runners tend to be over bet in the superfecta pool and when outsiders come in especially in the top two positions, explosive payouts might result.

A nearly full field of 11 optional claimers will contest this 6.5 furlong event on the dirt exclusively for 3-year-olds. One runner exits a synthetic race at Turfway and also has a new trainer and all other runners come in off dirt events including seven at Churchill, two at Oaklawn and one at Belmont with one of the Churchill runners coming in off the claim. The field has combined for an in the money rate of one in every two starts overall and slightly better at the distance. There is a solid amount of speed with the field combining for a lead at the second call at better than one in five starts for races that show. I anticipate a fast pace with the advantage to off pace runners.

No. 5 Mendenhall for trainer Bill Mott has run two consecutive routes and where he fared poorly and his only victory came in a seven furlong sprint prior to that along with another up the track performance on debut. He ran extremely fast last out until the six furlong mark and does not need the lead. He looks like an overlay here at 8-1 as your key horse.

Chad Brown sends out No. 8 Patient Capital who has two starts on off tracks with one win. He looks competitive as an off pace runner with upside as an unknown on a fast track at odds of 8-1.

No. 2 Hippodrome has been in the money four of seven tries and appears as fast as his competitors as another not need to lead type who may inherit a placing as the speed backs up in the final stages of the race and he is 5-1.

The runner who looks best is No. 9 Sacred Samurai who backed up in a mile try coming out of the same race as No. 5 Mendenhall off those fast fractions. He has a first and second in two tries at the distance.

The final runner is No. 6 Spankster for D. Wayne Lukas who has two in the money finishes in three tries including one second place run at the distance when he was in another barn. This is his second start for trainer Lukas.

The American Derby is a stakes for 3-year-olds run at a mile and one sixteenth on the dirt and it attracted 11 runners including two trained by Rodolphe Brisset. Eight of the runners exit dirt events including five at Churchill and one each at Lone Star, Hawthorne and Indiana Downs. The final three runners come out of turf races including two at Churchill and one at Keeneland. The field has combined for an in the money rate of two of every three starts overall and at the distance. There is little speed with runners combining for a lead at the second call only five times in 75 combined starts for races that show. The pace should be slow with the advantage to runners on or near the lead.

No. 11 O P Firecracker is four of eight overall, has some tactical speed, and is cutting back in this race from a longer route where he ran on pace the entire event at Churchill. He figures to be a factor throughout and looks like an overlay at odds of 10-1 as your key runner.

No. 10 War Campaign has a first and second in two starts and figures to improve as one of the runners with only two lifetime starts. His upside with few races under his belt combined with odds of 15-1 make him a solid superfecta player.

No. 1 Fowler Blue for trainer Doug O’Neill is three of nine on dirt and has competed at five different tracks in his last ten starts. He looks a little slower than the faster runners in the field, has a pace pressing style and has finished fourth half of his last ten starts. This record along with his solid odds of 15-1 justify his inclusion for a nice potential payout.

One of the Brisset runners is No. 5 McLaren Vale who is four of five overall and he also has some tactical speed. Expect him to be on or near the lead and a strong superfecta player at odds of 4-1.

No. 9 Rattle N Roll has faced the toughest competition in the entire field and while a closer, is difficult to not include on his solid four of five record at the distance combined with a reasonable drop in competition.

A field of nine runners is set to contest the Kelly’s Landing Overnight Stakes, a 6.5 furlong dirt race for 3-year-olds and up. All runners exit dirt events including six at Churchill and one each at Hawthorne, Belmont and Belterra. The field has combined for an in the money rate of six in ten starts overall and slightly better at the distance. There is some speed with runners combining for a lead at the second call one in eight starts for races that show with two runners having well over half those leads. The pace should be swift with the advantage to runners just off the lead.

Larry Jones sends out No. 6 Bob’s Edge who is 11 of 15 overall and won his only try at this distance. He is a model of consistency and he will be flying down the lane late and the faster the pace, the more he will be a strong stretch factor at odds of 6-1 as your key runner.

No. 9 Miles Ahead occasionally runs a big race and has won 11 of his 22 lifetime dirt starts along with four other placings in those starts. He fits the profile of a classic superfecta contender at odds of 6-1.

No. 1 Awesome Gerry has the ability to be on or near the lead or come from off pace. That should be an advantage especially if the pace is hotly contested. His last two starts at Keeneland and Churchill were very fast and were both wins at seven furlongs. He is going to be a strong factor in the stretch at odds of 8-1.

Trainer Trisha Duncan part of the David Vance training family is a relatively new trainer on the scene with a solid record in a limited number of starts and she sends out No. 2 Heart Rhythm who is 15 of 18 overall and has an even running style with one second place finish at the distance in her lone try. She is 15-1 and well worth including here.

No. 4 Aloha West is the most formidable competitor in the field and the winner of the 2021 Breeders’ Cup Sprint (G1). He is going to be an underlay, has an eight of 11 record, has to pass runners in the stretch and may not get there in time.

This seven furlong optional claimer on the dirt for fillies and mares 3-year-olds and up attracted a nearly full field of 11. Eight of the runners exit dirt races at Churchill, one each exit turf races at Gulfstream and Churchill and the final runner is an Argentina import last racing on dirt.  The field has combined for an in the money rate of nearly two out of every three starts overall and slightly lower at the distance.  There is some speed with runners having the lead at the second call about one in eight starts and one runner has a third of those leads. I anticipate a moderate pace with the advantage to runners on or near the lead.

Steve Asmussen sends out No. 4 Regal Retort who has some speed, four wins at the distance in nine starts overall and an overall dirt record of hitting the board sixty percent of the time. She is 9-2 and your key runner.

No. 1 Be Like Water is four of five on dirt and has a first and second at the distance. She is a slightly off the pace runner and her last two dirt efforts were wins. She looks like an overlay at odds of 10-1.

A wild card in this race is No. 5 Lindalevesolta, the Argentine import who has been first or second in all her South American starts. Her odds of 15-1 make her a valid player coming out of relatively large fields.

No. 6 Honorifique is a valid player here with a 70 percent in the money record, and she is also three for three in the money at the distance. Her odds are 9-2.

No. 11 Millefeuille for trainer Bill Mott looks like the likely betting favorite with a seven of nine overall dirt record and is making her first attempt at seven furlongs. She has faced the toughest competition in the field earlier in her career and has to be included.