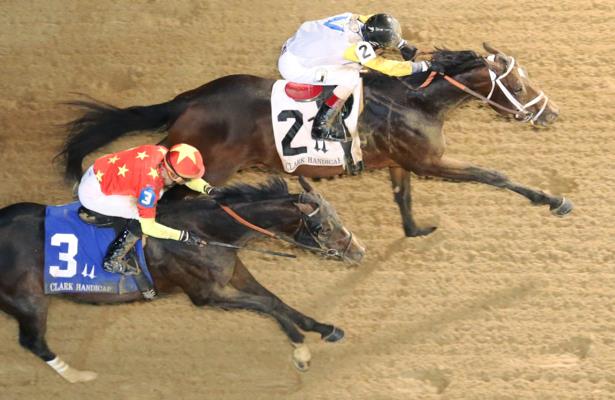 Saratoga's Grade 1, $750,000 Woodward is supported Saturday by a trio of graded events, forming an all-stakes Pick 4 to close the card. Check out these four contenders poised to score at longer odds:

#3 Raging Bull (2-1) is the deserving favorite from off the pace, and #1 Up the Ante (7-2) is the one to reel in from the hedge, but I will go in a different direction from a value standpoint. #2 MARCH TO THE ARCH (10-1) exits back-to-back wins at this nine-furlong distance, including the Toronto Cup at Woodbine on July 28, and that race has turned into a productive affair. Runner-up Rose’s Vision returned to win the $100,000 Better Talk Now as my top choice this week at Saratoga, and show finisher Neepawa captured the $400,000 Breeders’ Stakes at Woodbine on Aug. 18.

American Pharoah’s half sister, #7 Chasing Yesterday (5-2), is strictly the one to beat in here, and second choice #4 Catherinethegreat (5-2) is probably the one to catch. While the favorite likely gets the job done for Smith/Baffert, another California shipper might be able to spice up the exotics. #10 REFLECT (10-1) cruised in her Santa Anita debut June 7, and clear runner-up Katieleigh returned returned to graduate at Los Alamitos July 4. Following a couple of months off, Keith Desormeaux’s filly resurfaced in the Grade 2 Sorrento at Del Mar, and that was a useful effort. She angled in from an outer post and worked her way up to second while racing between horses turning for home, and she ended up splitting the 10-horse field. She should move forward second off the shelf.

#9 Gunnevera (4-1) ran well in both local starts, including a runner-up finish in the Travers last summer. He easily won his Gulfstream prep for this, and he will never find an easily grade one spot. But there is value to be found elsewhere. #10 SEEKING THE SOUL (9-2) might be poised for a big late-season push for Dallas Stewart. He has only finished out of the trifecta once since June 2017, and that was a fifth-place finish in the Pegasus World Cup. Last year’s Grade 1 Clark hero missed by a head in a $100,000 affair at Indiana Grand on July 14, and that was his first outing in more than five months. The fresh horse won a local optional claiming affair at this distance last summer, and he figures to be sitting on ready under Javier Castellano. He drilled a local training track bullet for this Aug. 24, and he projects a midpack stalking trip in this spot.

#5 Santa Monica (6-5) is the sharp Chad Brown chalk exiting a nice off-the-pace score in the Grade 2 Dance Smartly. She will get hammered in the wagering, and her stablemate #3 ONTHEMOONAGAIN (3-1) might offer a hint of value. The latter got no pace help and had an uncomfortable trip as the favorite in her local U.S. bow at a mile and an eighth. That was her first outing in more than 10 months. She shows two local works since her last, including a second-best of 21 turf move at five furlongs. She handled a mile and a quarter and longer in France, and she almost has to move forward today.