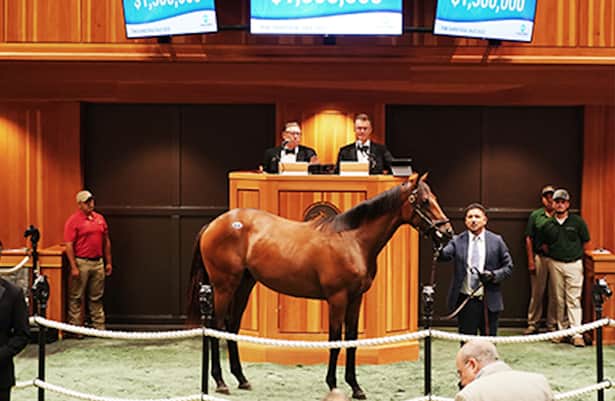 A quartet of seven-figure colts topped a group of selected yearlings on offer during the first session of Fasig-Tipton's 101st Saratoga Sale, which took place Monday evening at the Humphrey S. Finney Pavilion in Saratoga Springs, N.Y.

A colt by champion sire Uncle Mo (Hip 68) topped the session when sold for $1,500,000 to West Point & Woodford Racing, L.E.B., agent from the consignment of Lane’s End, agent. The bay colt is the second foal out of Secret Sigh, an unraced Tapit half-sister to Japanese multiple Group 1 winner Mozu Ascot and to stakes winner Kereena. The immediate family includes champion Rahy’s Attorney and Grade 1 winners To Honor and Serve and Angela Renee. Hip 68 was bred in Kentucky by Summer Wind Equine.

“We’re very pleased with the opening session of the 2022 Saratoga yearling sale,” said Fasig-Tipton president Boyd Browning. “It was just a really great environment to have an auction and the results were strong from start to finish. (We’re) thrilled when four horses sell for over a million dollars.”

A colt from the second crop of 2018 Triple Crown champion Justify (Hip 78) sold for $1,100,000 as the second-highest price of the session. The chestnut colt was purchased by Michael Wallace, agent for M.V. Magnier, from the consignment of Warrendale Sales, agent. Hip 78 is out of the winning Langfuhr mare Slews Golden Rule, making him a half-brother to three winners, including stakes winner Ledecka (Tiznow). The colt hails from the immediate family of Grade 1 winners Ops Smile and Win Win Win. Hip 78 was bred in Pennsylvania by Blackstone Farm.

“The most encouraging thing was the breadth of the buyers. (There was) lots of activity from a diverse buying group,” Browning said. “You know, we hit the superfecta: average up, median up, gross up. … And to have an (reserve not attained) rate under 20 percent for one of the most selective sales in the world is remarkable.”

Three-time Leading Sire Into Mischief was represented by a pair of seven-figure colts on the evening. The first came in the form of Hip 74, purchased by Hideyuki Mori for $1,000,000 from the consignment of Blake-Albina Thoroughbred Services, agent. Out of the winning Yes It’s True mare Shopit, the bay colt is a full or half-sibling to five winners and a full brother to stakes winner Shoplifted, who was Grade 1-placed three times at 2 and 3. Hip 74 was bred in Kentucky by Newtown Anner Stud.

Spendthrift Farm, in partnership with Cypress Creek and St. Elias Stables, went to $1,000,000 to secure Hip 102, the second of the seven-figure colts by their record-breaking roster leader. The bay colt was consigned by Lane’s End, agent. Hip 102 is the first foal out of the multiple graded stakes winning Smart Strike mare Teresa Z, a granddaughter of multiple Grade 1 winner and millionaire My Flag. The colt hails from the immediate family of Champion Storm Flag Flying and Grade 1 winners Miner’s Mark, Traditionally, and Mr Speaker. Hip 102 was bred in Kentucky by St. Elias Stables.