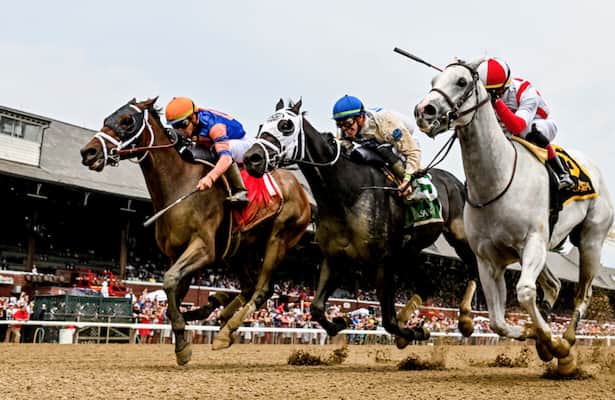 For me, one main attraction to superfectas is that a superfecta probable payout pool is not displayed making this bet an unknown endeavor relative to an exacta and even trifectas in some circumstances where the probable payouts are available. However, if you observe the pool results over a long period of time, you will come to realize the heavily wagered upon runners tend to be overbet in the superfecta pool and when outsiders come in, especially in the top two positions, explosive payouts might result.

This is why a 10-cent superfecta is a great leveraged wager if you select one runner you strongly believe will land in any one of the top four positions.

The superfecta key strategy illustrated above requires you to ensure that your keyed horse finishes in one of those top four positions. To maximize return, I am looking for three conditions to create potential for a high payoff.

The Saturday cards at Saratoga and Del Mar provide 4 opportunities on dirt and turf.

This six-furlong dirt optional claimer for 3-year-old and up state-bred runners attracted a field of 10 including two trained by Rudy Rodriguez. The entire field exits dirt races including six at Belmont, two at Finger Lakes and one each at Belmont and Monmouth. The field has combined for an in the money rate of seven out of ten starts overall and at the distance. Runners have combined for a lead at the second call two in nine starts for races that show. I anticipate a solid pace with the advantage to runners coming off the pace.

No. 1 Bank On Shea has changed hands five times over the course of the last few years covering 10 of his 11 lifetime starts and has met tougher fields than his competition. He has run creditably in his last five tries including one win and a fourth place finish. The competition, his pressing style, and overall record of five wins in 11 starts make him your key runner at odds of 9-2.

Bill Mott saddles No. 7 Big Bobby who is tied with another runner for the fewest starts in the field has also performed well in those eight career runs with six consecutive first or second place finishes prior to throwing in two poor efforts his last two tries. His last start was his poorest to date after a five month layoff showing speed to the second call. I anticipate an improvement in this second off the layoff try where Mott has a good record. His odds are 10-1.

One of the two Finger Lakes invaders is No. 2 Flying Emperor who is simply too competitive to ignore with a record of six wins and eight second place finishes in 14 lifetime starts.  He is clearly fast enough to compete against the other state-bred runners in this field and his odds are 10-1.

Steve Asmussen sends out No. 3 Hot Rod Rumble who has systematically improved across eight lifetime tries breaking his maiden in his seventh start following that up with an allowance win. His first two starts were out of the money and since then he has hit the board all six tries. He should continue to improve at odds of 6-1.

No. 4 Amundson has seven in the money finishes in 10 tries at the distance and is not a need to lead type. He should be near the pace early and pass tiring need to lead types as part of the superfecta mix late.

This mile and one-sixteenth allowance race on the main turf for 3-year-olds and up will pit 12 runners against each other including two trained by Mike Maker. Ten of these runners exit turf races including six at Belmont and one each at Keeneland, Churchill, Santa Anita and a French shipper last out at Nantes. Two runners exit dirt races at Churchill and Belmont. One runner is trying turf for the first time and stretching out for the first time. Two runners have new trainers and one of those is coming in off a layoff along with another runner coming in off a layoff. The field has combined for an in the money rate of over one in two starts overall and exactly that rate at the distance. Runners have combined for a lead at the second call one in seven starts for races that show. I expect a fast pace as a result of a sprinter trying turf and a route for the first time and the presence of one other need-to-lead type. The advantage should be to forwardly placed runners just off the pace.

Wayne Catalano saddles the French invader No. 10 Colosseo who has six top-three finishes in 10 lifetime turf tries and three of those out of the money finishes were in Group events in France. The competition is softer here and his odds look very attractive as a 6-1 key runner.

No. 9 Irwin makes his third U.S. start after five runs in Ireland on both synthetic and turf. His overall record of six in the money finishes in seven lifetime tries along with his mid-pack forwardly places style make him a solid superfecta factor at odds of 10-1.

No. 1 Bay Street Money has only one win in 12 lifetime tries with five second place finishes. He shows some strong early pace runs and he fits the profile of a strong player off his running style and his eight top four finishes in his last 10 tries. His odds are 8-1.

No. 5 Shawdyshawdyshawdy looks like a grinder whose record on the turf is only three in the money finishes in 10 tries but he has a running style that indicates he will keep coming at you although he rarely gets there. A similar effort to his past tries make him a superfecta factor at odds of 12-1.

Todd Pletcher saddles the probable favorite making only his second lifetime start in No. 12 Capensis who won on debut and looks very competitive here with a closing style based upon his one turf try.

The Bing Crosby Stakes (G1) is a six-furlong dirt sprint for 3-year-olds and up that brings together 10 runners.  The entire field exits dirt races including two each at Santa Anita and Churchill and one each Los Alamitos Race Course, Lone Star, Pleasanton, Oaklawn, Del Mar and Gulfstream. One runner has a new trainer. The field has combined for an in the money rate of nearly two in three starts overall and a similar rate at the distance. The rate of being on the lead at the second call is two in every nine starts overall for races that show. I anticipate a moderate pace with the advantage to runners on or near the lead.

No. 7 Letsgetlucky has never been off the board in 10 lifetime starts and has tactical not need to lead speed. He will be forwardly placed and should be in the mix throughout at odds of 6-1 and is your key runner.

No. 8 Diamond Oops always shows up on turf and dirt and is frequently ignored in the betting pools. His lifetime record is seven of nine at the distance and he is a grinding sprinter who has been in the top four eight of his last 10 starts. He is an overlay at odds of 12-1.

Steve Miyadi has been having a great year and saddles No. 1 Desmond Doss who has been in the top three all eight of his dirt tries, has a pressing style, and should be a stretch factor at odds of 10-1.

No. 3 Bagboss similar to No. 7 Letsgetlucky and No. 1 Desmond Doss has never been off the board in his eight lifetime starts and boasts two first and second place finishes in four tries at the distance. This is the toughest competition he has faced to date but as a sprinter who seems to be improving with each start, he looks like a great superfecta player at odds of 8-1.

Bob Baffert sends out No. 2 Shaaz who looks pretty solid cutting back to six furlongs. He has three wins in four tries with one third place finish all efforts longer than six furlongs where he showed pressing type speed and figures to be a factor in the same way in this race.  He should be one of if not the betting favorite and his odds are 7-2.

The San Diego Handicap (G2) is a 1 1/16 miles dirt race for 3-year-olds and up attracted nine runners including two trained by Bob Baffert. Eight of the nine entries exit dirt events including five at Santa Anita, and one each at Lone Star, Churchill and Dubai with one final runner exiting a turf race at Santa Anita. The runners have combined for an in the money rate of seven in ten starts overall and nearly nine in ten at the distance. The field has combined for a lead at the second call about one in eight starts for races that show. I expect a moderate pace with the advantage to forwardly placed runners.

No. 4 Stilleto Boy has two wins in two starts at the distance and comes out of seven consecutive dirt graded stakes where he finished in the top four six of those tries. He is a very hard-hitting runner who presses the pace although he does not win much. He is your key runner at 6-1.

No. 5 Senor Buscador is a wild card off four lifetime starts including three wins. Trainer Todd Fincher has a very solid record and if the pace is faster than anticipated, he will be a very solid stretch factor at odds of 20-1.

Trainer Brad Cox does not ship to California very much and has shipped in No. 3 Mandaloun who has three in the money finishes in three starts at the distance including two wins and comes off two of his poorer efforts out of his 11 lifetime starts. The effort in Saudi Arabia was poor and the Stephen Foster (G2) was marginal, but he still merits strong consideration against this field at odds of 4-1.

No. 9 Royal Ship has run in graded stakes nine of his last 10 tries on both turf and dirt. He possesses tactical speed and will never be far out of it with a lifetime in the money rate on both surfaces of nearly 75 percent, he is a solid player at odds of 4-1.

No. 8 Country Grammer trained by Bob Baffert is going to take a lot of money and he always shows up even after long layoffs. In this instance, he has been on the shelf for several months since winning the Dubai World Cup (G1). He may not have enough distance here and cannot be dismissed but should be an underlay to win.