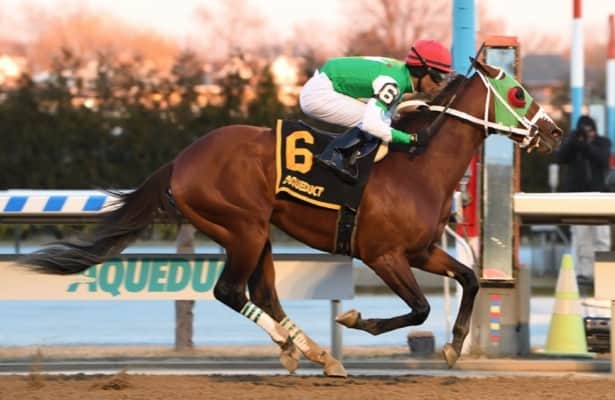 Florida-based trainer Saffie Joseph Jr. will fill as many as 12 stalls at Belmont Park at the upcoming 48-day spring/summer meet, which runs from April 22 through July 11.

On Saturday, assistant trainer Sabine Langvad led three starters to the Aqueduct paddock and had her picture taken on each occasion thanks to wins with Mischevious Alex in the Grade 1, $300,000 Carter Handicap; Drain the Clock in the $200,000 Bay Shore (G3); and Michael’s Bad Boy in a state-bred maiden claimer.

“It was very cold here on Friday and I was like, ‘oh, this is rough.’ But I can take a few frozen fingers for three wins,” Langvad said with a laugh.

Mischevious Alex, owned by Cash is King and LC Racing, earned a 109 Beyer for a dominant 5 1/2-length score in the seven-furlong Grade 1 Carter.

The 4-year-old Into Mischief colt, who captured the Gotham (G3) at Aqueduct last year, was much the best over multiple Grade 1-winner Mind Control. Irad Ortiz Jr., who won six races on the card and guided all three winners Saturday for Joseph, now has piloted the colt to three successive wins, including a score in the Gulfstream Park Sprint (G3) in February.

“Irad gave him a perfect trip. He showed his true class at the quarter pole when he gave a strong kick and went away from everybody,” said Langvad. “I thought he was super impressive and showed that he’s a Grade 1 horse.”

Mischevious Alex could target the $1 million Metropolitan (G1) on June 5 at Belmont Park, with connections indicating Saturday that a pair of Grade 1 sprints at Saratoga – the Vanderbilt and Forego – are very much in play.

Drain the Clock, owned by Slam Dunk Racing, Madaket Stables, Wonder Stables and Michael Nentwig, turned back in distance and earned an 86 Beyer for his 1 3/4-length front-running score in the seven-furlong Bay Shore.

The Maclean’s Music chestnut was a little fractious in the gate but was able to dictate terms for the wrapped up win. A record of five wins from seven starts includes scores in the six-furlong Limehouse and seven-furlong Swale (G3) at Gulfstream. He entered the Wood from a pacesetting second in the 1 1/16-mile Fountain of Youth (G2) at Gulfstream.

“He’s still maturing. It’s his first time in a new place and it wasn’t terrible. He still broke well and I think with experience he will get better,” said Langvad. “He did well in the Fountain of Youth running second behind Greatest Honour. If they wanted to, they could have pushed him to go that distance but it seems his specialty is going seven-eighths and especially one turn. Their decision was to focus on what seems to be his strength. He’s shown he belongs in graded races. Hopefully, some big tasks ahead for him.”

A NYRA Grade 1 could be in order for Drain the Clock, as Joseph said Saturday the $400,000 Woody Stephens on June 5 at Belmont Park and the $500,000 H. Allen Jerkens Memorial on Aug. 28 at Saratoga are long-term goals for the talented colt.

Michael's Bad Boy, a Lawrence Goichman homebred, graduated in his eighth start, drawing clear by 3 1/2 lengths in a state-bred 1 1/16-mile turf event with Ortiz in the irons.

Langvad said all three horses were in good order on Sunday morning.

“Everyone looks great and ate up all their food,” said Langvad. “I’m super happy with how they came back and they took to traveling really well. Shipping back and forth from Aqueduct didn’t seem to bother them at all.”

Mischevious Alex and Drain the Clock are scheduled to ship back to Joseph in Florida on Monday, while the New York-bred Michael’s Bad Boy will remain at Belmont.

Queen Nekia, last-out winner of the Royal Delta (G3) on Feb. 20 at Gulfstream, is slated to arrive in New York on Wednesday for a start in Saturday’s $100,000 Top Flight Invitational.