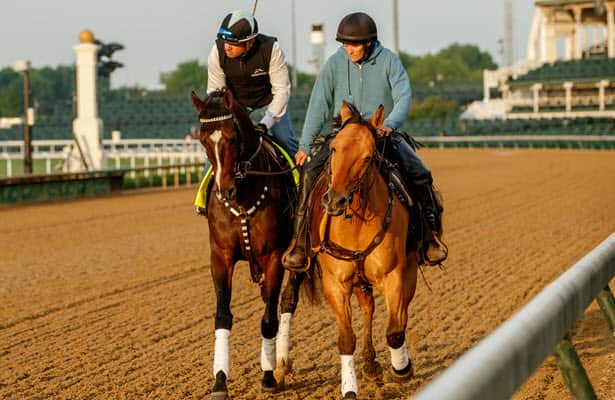 There are different ways to attack the two-week break between the Kentucky Derby and the Preakness. Three different ways this year, what with Epicenter, Simplification and Happy Jack making the quick turnaround from Churchill Downs to Pimlico.

“You have to run, you have to be good enough, and you have to be in good shape,” said trainer Steve Asmussen, who is moving forward after Epicenter’s soul-crushing, second-place finish to 80-1 long shot Rich Strike in the Derby. Epicenter will be favored again when he and eight other 3-year-olds race in Preakness 147 on Saturday at 7:01 p.m. EDT.

Asmussen has won the Preakness twice with horses who raced two weeks earlier at Churchill Downs. Actually, two weeks and a day with Kentucky Oaks winner Rachel Alexandra in 2009. Before that, he brought Curlin to Pimlico right after a third-place finish in the 2007 Derby. Eight months after those victories, both would be named horses of the year.

“You know why they won in two weeks?” Asmussen asked. “Because they were the best horse. They were good enough.”

Three days after he finished fourth in the Derby, Simplification was the first Preakness horse to arrive at Pimlico. He has become so comfortable in his new barn stall that he started to establish his boundaries.

“See the hay bales and packages of shavings in front of his stall?” asked Alex Sano, assistant to his father, trainer Antonio Sano. “He starts biting people out of the blue. He leans and tries to bite the hot walker and the groom.”

“His stall is his domain,” Simplification’s owner Tami Bobo said Friday morning. “There is absolutely no question on that. He has proven that over and over. If you want to love on him or play with him, it needs to be outside of the stall.”

Arriving Wednesday morning, Happy Jack was the last of the three Derby horses to get to Pimlico. He was not even put in the stakes barn with the other Preakness horses. Instead, he is in the next row, where trainer Doug O’Neill housed I’ll Have Another and Nyquist. I'll Have Another won the Preakness; Nyquist finished third.

O’Neill said accepting the challenge of the two-week turnaround is an endorsement of the peak condition of the horses. He said if they get this far, they were at the top of their game going into and coming out of America’s biggest race, not to mention cutting back now from 1 1/4 to 1 3/16 miles.

“Once they complete a mile and a quarter, if it hasn’t knocked them out, and they’re still full of energy and doing well, I don’t think they could possibly ever be any more fit than they are at this particular time,” he said. “The quick turnaround is fairly easy, because you don’t need to do a whole lot.”

Having a fit horse is one thing. Coming off a tough run in the Derby is another, especially one that began with the fastest first quarter mile in the history of the race.

In the case of Simplification, the question for some handicappers might be whether he bounces. Bobo was not concerned. Not when she looked at Simplification’s form cycle.

“This horse has been pretty well drilled and asked to perform,” she said. “He has absolutely breezed or raced consistently as any solid horse would. I feel like coming back in two weeks, even if weren’t going to race, Antonio would be breezing him anyway on Saturday. Knowing the horse is in good order, and he looks better than he ever has, I feel more confident coming into this race than any race previous.”

Because he already had qualified for the Kentucky Derby off his February win in the Fountain of Youth (G2), the Sanos did not want their colt to empty his tank when he finished third the following month in the Florida Derby (G1). After trying to preserve some of the horse’s energy, now they are testing his durability.

“One of the reasons we decided to give the Preakness a shot was the way the horse came out of the Derby,” Alex Sano said. “He came out sound. The night of the Derby he was drinking water, walking normally. The following morning he was a little butt sore from the loss in the Derby. My dad said, ‘We’re shipping to the Preakness the next day. We arrived here early. He’s adapted well to the surface, to the weather, and we couldn’t be happier to be here.”

“Coming in early was definitely an advantage for him,” Bobo said. “He needed the down time from all of the action, the people, the cameras. He never had left Florida before. Coming into Louisville was a big change. I fell like when he came in here, even though he was the lone ranger, it gave him a place of serenity.”

Epicenter arrived at the Pimlico stakes barn Tuesday afternoon, almost exactly a week after Simplification. He did so the day after he breezed at Churchill Downs. Asmussen was not asking him to be the next Curlin or Rachel Alexandra.

“Hoping that Epicenter is up to the task or good enough to be a Preakness winner,” he said. “We have a tremendous amount of confidence in him. We love the horse. We all saw what happened two weeks ago. I haven’t had a lot of people say they saw that one coming, so here’s another opportunity. I hope he performs, and I expect for him to perform similarly – if not, even better.”

Asmussen said there really is only one thing out of his control that concerns him about Saturday. That is the forecast high temperature of 95 degrees.

“He’s a big horse, a very big horse, and he has not run under those circumstances before,” Asmussen said. “How will that affect him? I think the things that you do for that are just like with your kids. Drinking plenty of water, staying hydrated, cooling them off at every opportunity that you get. Then you have that base covered. The difference is a physical performance at that temperature.”

In that respect, Happy Jack might have an advantage. Before he began his Triple Crown road trip, he worked out on some hot days this spring in Southern California.

“I’m not that concerned,” O’Neill said. “He’s a pretty laid-back horse. Not much seems to bother him. I don’t think the weather will be a factor. It gets pretty toasty (in California). Maybe not as humid as it can get out here. He’s seen a lot of warm days. It doesn’t seem to faze him.”