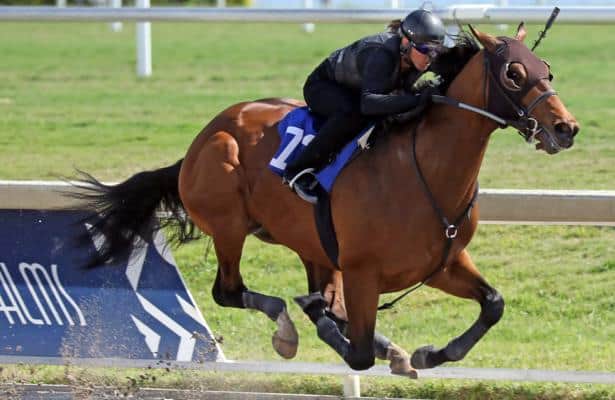 The record-setting $3.65 million colt purchased by Coolmore and sent to Bob Baffert out of Fasig-Tipton’s March sale of 2-year-olds will from now on be known as Cezanne, an ode to the French post-impressionist painter.

In an interview this week with Breeders’ Cup pedigree ace Ren Carothers, Baffert said Cezanne is on course for an October debut at Santa Anita Park. The son of Curlin posted his first breeze with the barn’s main Del Mar string Tuesday, working a bullet half mile in 47 seconds.

“He just came in here and he was supposed to go easy, but he did it pretty handily,” Baffert told Carothers. “He’s really talented. I expect huge things from him, because usually Curlins are pretty slow coming around.”

But apparently not Cezanne, who also shows four works at Los Alamitos, where Baffert newcomers typically get started. Three of those breezes were fastest at the distance as well.

“I talked to him a few days before he passed,” Baffert said of Crupi, the longtime trainer and consigner who died in May. “It was at the Maryland sale and he said, ‘Bob, I’ve had a lot of good horses. I’ve never had one like him.’

“It’s exciting. I’m taking my time with him.”

Given the timing of his expected debut and the pedigree — Cezanne is out of the Bernardini mare Achieving — this one figures as a prospect for the Kentucky Derby trail.

Hip 173 at the sale, Cezanne impressed before entering the ring when he drilled the co-second-fastest eighth-mile breeze and galloped out strongly at Gulfstream Park.

“It was fun,” said Baffert, whose Triple Crown winners American Pharoah (2015) and Justify (2018) both stand at stud at Coolmore. “It’s pressure, but we’ve been thrown into this fire before, so we know how to deal with it.

“At the end of the day, I know they’re all expensive, but you still have to train the horses and treat them like athletes — give them every opportunity to perform. But I am really excited about Cezanne.”

Coolmore’s known to spend high sums to acquire its horses, and of course, nothing’s certain in racing. Baffert feels like the price fits in Cezanne’s case.

Baffert recalled: “An old-timer told me one time, ‘How do you know you bought a good horse?’ He says, ‘When you can sell that horse for the same price the next day, you know you made a good buy.’

Taking a walk with Bob Baffert and the stars of tomorrow AKA #FutureStarsFriday with @rencarothers. https://t.co/ehyqUrzOXK