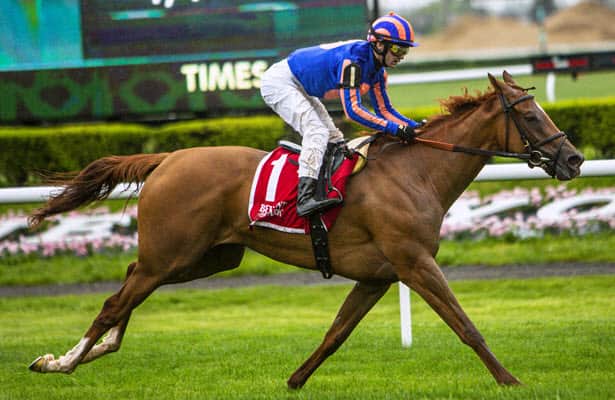 Away from the races since an even seventh-place finish in the Grade 1 Breeders’ Cup Filly and Mare Turf on Nov. 6 at Del Mar to close out her 3-year-old campaign, the Chad Brown-trained Rougir served notice on Saturday at Belmont Park that she could already be among the best in her division with an authoritative win in the Grade 3, $150,000 Beaugay for older fillies and mares at 1 1/16 miles on the inner turf course.

A $3.3 million purchase out of the 2021 Arqana December Sale for owners Peter Brant and Michael Tabor, Rougir took the first step toward making good on that purchase price on Saturday for her new connections.

The 4-year-old daughter of Territories made steady strides throughout her sophomore season for former conditioner Cedric Rossi, who oversaw her win in the Group 1 Prix de l’Opera Longines at Longchamp before coming stateside to contest the Filly & Mare Turf, in which Rougir was beaten 7 1/2 lengths.

“I’m the lucky recipient of some nice fillies he [owner Peter Brant] bought over there [in Europe],” said Brown. “Me and my team are very grateful for all the horses Mr. Brant sends us. It looks like we’re off to a great season. This is his tenth graded win already this season. He’s having a great year and deservedly so. He’s done the right thing by his horses [this] winter resting them.”

Shifting to Brown’s barn for 2022, it was unclear if Rougir would have immediate success at a Beaugay distance that figured to be shorter than her best, but neither that nor a glacial pace were enough to hamper her abundant talent.

Ridden by Flavien Prat, who is quickly becoming a go-to rider for Brown on the NYRA circuit, Rougir broke well but settled near the back of the seven-horse field as Plum Ali bounded out of the gate and seized control of the early lead.

Plum Ali, an improving filly in her own right, was coming off a win in the Plenty of Grace in April at Aqueduct Racetrack to begin her 4-year-old campaign, was allowed to set a slow opening quarter-mile, before quickening the tempo. Undaunted by the tepid splits, Prat coolly guided Rougir out into the clear on the backstretch and started picking off horses around the far turn while wide on the course.

Rougir was full of run as the field turned for home and even as more forwardly-placed horses sprinted to the wire, she had no trouble picking them up one-by-one and gliding to the finish an easy three-length winner. She completed the distance in a hand-timed 1:43.40 in rainy conditions over a course still listed as firm.

“It’s been a pleasure to ride for him,” said Prat, of the opportunity to ride for Brown. “I just try to do my best. Obviously, he’s given me some great horses to ride, so I’m just a really spoiled guy right now.

“I had the chance down the backside and got myself outside the slow pace and it felt like it wasn’t going to be any good to stay on the inside,” the rider added. “So, I gave myself the chance to go around and it was a big help for me.”

The victory was part of a strong day for Prat, who won the final three races on the card, including the Grade 3 Peter Pan with We the People.

Bred in France by Jan Krauze, Rougir returned $3.20 on a $2 win wager as the overwhelming favorite and bumped her career earnings past the $600,000 mark with the winner’s share of the purse of $82,500.

Now having a confidence-builder under her belt, the waters will no doubt get deeper for Rougir going forward, with a possible date in the Grade 1, $750,000 New York on June 10 at Belmont in play.

“I was thrilled with her race,” said Brown. “She showed a nice turn of foot that she shows us in the morning. It certainly looks like she’ll stretch out fine. She’s proven at a mile and a quarter previously and I think that’s where she’s headed. We’ll take a look at running her back in the New York Handicap. There was an easy pace and such and she was still able to overcome and run well.”

Our Flash Drive, the longest shot on the board at 28-1, rallied to get second for Hall of Fame trainer Mark Casse and owner Live Oak Plantation, finishing a nose in front of the Tony Dutrow-trained High Opinion at 14-1.

“Shane [Tripp, assistant to Mark Casse] asked me today what my thoughts were going into this,” said Dylan Davis, rider aboard the runner-up. “I told him that we wouldn’t be able to out kick them or out close them so we’d have to put her in the game early and go from there. I loved my position – they slowed the pace down. I got into her early, thinking maybe I could get her to run away from the field before Flavien got to me. He had much the best horse, but she ran a great race and I was happy with her.”