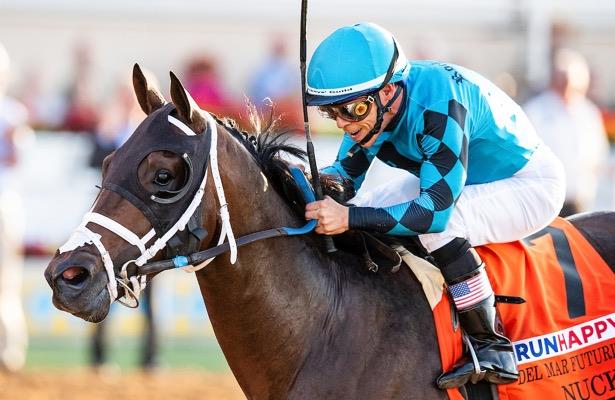 35-1 longshot Nucky took advantage of a chaotic edition of the Grade 1, $300,000 Del Mar Futurity on Monday, scoring in a race where favorites faltered.

Eight Rings went off from the No. 2 post in the seven-furlong freshman dirt feature as the 1-2 favorite.

The Bob Baffert trainee broke sideways under jockey Drayden Van Dyke, straightened out, then suddenly hesitated. He bumped into rival Storm the Court, and the collision unseated both Van Dyke and Storm the Court rider Flavien Prat.

Van Dyke was conscious and moving his extremities after the race but was transported to a local hospital, TVG’s Britney Eurton reported. Prat was well enough to ride in the next race.

“I think (Eight Rings) saw a gap and tried to make the gap,” Prat said. “We were inside of him. There were no options and we went down.

Baffert’s other entry, Garth, went off as the 4-1 second choice and set an opening fraction of 21.89 seconds. But Garth quickly ran out of steam entering the turn, and Nucky led a group of five horses who blew by him.

With Eight Rings, Garth and Storm the Court all out of the picture, longshots Nucky and Ginobli entered the stretch alongside each other. Those two colts made contact twice, and then Nucky took off.

“It was obviously unfortunate," said Miller, who also trains Wrecking Crew. "You never want to see any horse or rider go down. My first thoughts are with the horses and the riders. I don’t know what happened, but after that, we won clear.

"I wasn’t worried (about the inquiry). They bumped slightly, but the No. 4 (Ginobili) was tiring. To finish 1-2 in the Del Mar Futurity, for me, I mean it’s just incredible under any circumstances.”

Arroyo and Miller scored for the first time in the Del Mar Futurity, an event whose recent winners include American Pharoah (2014), Nyquist (2015) and Game Winner (2018).