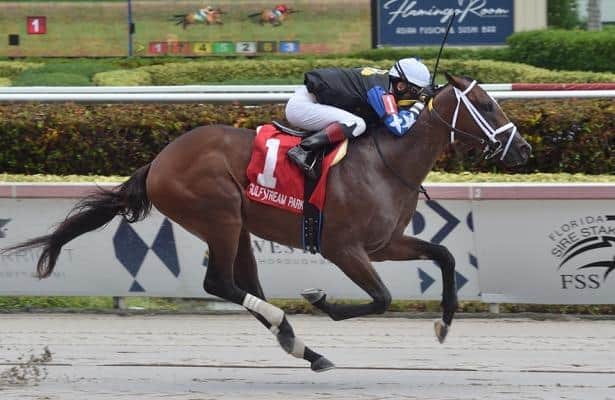 Chance It, who created a buzz June 29 when he earned the fastest Beyer Speed Figure (92) of any 2-year-old in the country at the time while breaking his maiden, was sent to post as the 1-5 favorite.

The son of Currency Swap, who broke well from the No. 1 post position under Edgard Zayas, was immediately taken on by Man With a Plan, who was ridden hard by Emisael Jaramillo to take a narrow advantage along the backstretch.

Unable to ease his mount off the inside, Zayas remained patient aboard Chance It while being lapped on by the long-shot pacesetter.

Zayas asked his mount for some run leaving the backstretch, and the Florida-bred colt quickly asserted himself to open a lead on the far turn.

Liam’s Lucky Charm made a strong sweeping moved on the turn into the homestretch but was no match for Chance It, who drew away to a comfortable victory.

“He was much the best,” Zayas said. “It was awesome. It was incredible. The post position wasn’t the best. But he made the best out of it and he showed that he had a lot of class.”

“It’s a relief to get one more out of the way,” Joseph said.

It was greeted in the winner’s circle by a large contingent from Shooting Star Thoroughbreds, a first-year ownership group managed by longtime trainer Mary Lightner.

“We had the speed right next to us, so we were definitely concerned about that,” Lightner said.  “But we went in thinking if he’s good enough he can overcome these things and he showed today he could.”

“Edgard knows the horse really well and he does such a great job and Saffie, nobody could do a better job than Saffie getting him ready.”

Chance It is out of Vagabon Diva, who had been adopted for $250 and subsequently given away to Ocala, Fla., breeder Bett Usher.

The long-striding colt was purchased privately after a Lightner-trained half-brother broke his maiden in his first start.

Despite a modest pedigree, Chance It attracted several offers that were turned down.

“We have had a little bit of interest, the phone has been ringing a few times, but we’re a racing syndicate and we wanted to do right by all these people,” Lightner said. “It’s hard to get a really good horse. So that’s the direction we decided to go. To keep him and see what we can do in the Sire Stakes.”

Horses to Watch: 4 from Fair Grounds, plus 1 to drop
In this biweekly series, racing analyst Keeler Joh...
x close