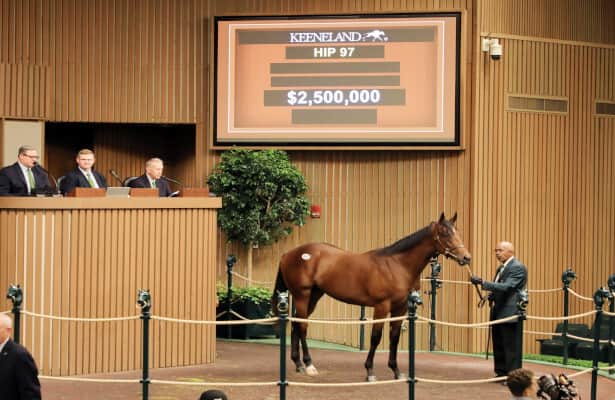 Keeneland kicked off its 2022 September yearling sale Monday with an opening session that was electric from start to finish, sparking vibrant trade among a full house of the world’s top buyers that generated double-digit increases in gross, average and median prices.

Leading the nine yearlings sold for $1 million or more was a colt by Quality Road for $2.5 million, the highest amount paid for a Thoroughbred yearling in North America and the second-highest price recorded anywhere in the world this year.

“It was a great day from beginning to end,” Keeneland president and CEO Shannon Arvin said. “Seeing the many people in the packed sales pavilion is a testament to the excitement of racing and of our sport in the state of Kentucky in particular. We have a lot of principals here, which is what we want. We want them to enjoy this tremendous sport and be looking to acquire their next champion."

In addition to the day’s healthy results, additional stats spoke to the strength of the session:

• Nine horses brought at least $1 million for the most seven-figure yearlings sold on day 1 since 2007.

• The top 15 highest-priced horses were bought by 11 different buyers.

The first horse through the ring, a son of Medaglia d’Oro consigned by Lane’s End, agent, sold for $850,000 to Talla Racing and West Point Thoroughbreds. The price is the highest for the horse assigned Hip 1 of the September Sale since at least 1999.

Put pedigree power into action with the Sire Moves Report

“Just looking at the raw numbers, these are figures that we haven’t seen in recent years,” Keeneland vice president of sales Tony Lacy said. “I was pretty excited leading up to the sale about the catalog. In the office, we all worked our tails off with a lot of negotiation with breeders and consignors. We’re listening to the breeders and we’re looking at the whole crop. We want to create diversity but also quality among those early books, because that’s what the buyers want. They afford us their time to come here. We put the best horses forward, and they responded. The results were really rewarding. It’s really encouraging going forward.

“With the enthusiasm for racing at the moment, we’re in a bit of a golden era,” Lacy added. “We’ve got to learn how to not take anything for granted and how to develop and work forward."

The session-topping Quality Road colt sold to Talla Racing, Woodford Racing and West Point LEB, agent, for the highest price recorded at the September Sale since 2019. Stonehaven Steadings consigned the colt, who is a half-brother to stakes winner Feeling Mischief and from the family of champion Wait a While. His dam is Grade 3-placed winner True Feelings, by Latent Heat.

“From the moment he was born, he’s been special,” Aidan O’Meara of Stonehaven Steadings said. “When he was born, he got up off the ground – usually foals fall over a couple of times – but he jumped up and got stuck under his mother’s legs. But he didn’t do anything crazy. He just stood there and backed himself up, real cool, and walked away. At that moment, it told me he was special. He was a May foal, so he was always behind the others. We knew he was a special type physically, and when he started to develop as a yearling he developed that walk he has. He is a beautiful physical. He held his own as a Book 1 yearling as a May 5 baby. I don’t think I’ve ever seen a better-moving horse in my life. He’s a magnificent horse. It’s the most special moment we’ve had in the history of the farm.”

A colt by Curlin out of Grade 1 winner Carina Mia, by Malibu Moon, sold to Winchell Thoroughbreds and Three Chimneys for $1.7 million. From the family of Grade 1 winners Miss Match (ARG) and Miss Linda (ARG), he was consigned by Hill ‘n’ Dale Sales Agency, agent.

Winchell Thoroughbreds and Three Chimneys also went to $1.5 million to acquire a Gun Runner filly who is the first foal of the winning Tapit mare Tip At Tapit. Tip At Tapit is a full sister to Grade 1 winner Time and Motion.

A filly by Into Mischief from the family of champion Malathaat sold to Frank Fletcher Racing Operation for $1.25 million. Paramount Sales, agent, consigned the filly, who is the first foal of Grade 3 winner Song of Spring, by Spring At Last.

“She was a star from the minute she arrived on the grounds,” Paramount’s Pat Costello said. “She is so athletic, and the sire is so strong. She presented herself well, and she made what she deserved. She’s just gorgeous.”

Donato Lanni signed the ticket for the filly, who will be trained by Bob Baffert.

“She looks honest and classy,” Lanni said. “She’s going to be fast, but she has a sort of class about her, really sweet and kind. All year the good ones have just been really tough to buy. You’ve got to be ready for it. It’s a strong market.”

Two yearlings sold for $1.2 million each.

A colt by Curlin who is a half-brother to undefeated 2018 Triple Crown winner Justify was purchased for the amount by Hideyuki Mori of Japan.

Glennwood Farm, agent, consigned the colt, who is out of the Grade 3-placed winning Ghostzapper mare Stage Magic. He also is a half-brother to Grade 3 winner The Lieutenant.

“He was a lovely colt,” Glennwood owner John Gunther said. “He was a late foal and has a lot of growing to do. There would have been more interest if he were a little more developed. Two months from now he will be a fantastic-looking colt. He’s a great mover with a tremendous attitude. We raised him at the farm and said, ‘This is a racehorse.’ ”

Claiborne Farm, agent, paid $1.2 million for a daughter of Quality Road from the family of Horse of the Year and leading sire Gun Runner. Consigned by Gainesway, agent, she is out of Princesa Silvia, a winning daughter of Medaglia d’Oro.

“She is the real deal,” Gainesway general manager Brian Graves said. “We expected a lot of her coming here, and she trickled over (our expectations) by 10 to 20 percent. She was a special type, and she’s from the family of Gun Runner. It turned out well. She was a leggy filly. She was raw. She had a long neck and a really good walk to her. She looked like she could run through a brick wall, and that is what you would expect of a good Quality Road filly.”

“She was at the top of his list today,” Sams said. “It’s a good pedigree, good family. It’s tough to get into. We’ve got a couple branches of the family now at Claiborne. She looks like she would be quick, and the (buyer) is looking for dirt fillies to go two turns. She’s got that, and she’s got plenty of page in the second dam.”

A pair of yearlings sold for $1.15 million apiece.

A daughter of Into Mischief from the family of recent Saranac (G3) winner Annapolis sold for the amount to Mandy Pope’s Whisper Hill Farm. Glennwood Farm, agent, consigned the filly, whose dam is the Galileo (IRE) mare Wildwood Rose (IRE).

BC Stables paid $1.15 million for a colt by Quality Road out of the stakes-placed winning Dixie Union mare Checkupfromzneckup. Taylor Made Sales Agency, agent for WinStar Farm Bred & Raised, consigned the colt, who is from the family of A.P. Indy.

Courtlandt Farm spent $1 million for a City of Light colt from the family of champion Covfeve. Consigned by Betz Thoroughbreds, agent, he is out of the stakes-winning Pulpit mare Tea Time.

“We bought the half-sister last year, a Union Rags filly (named Soul Play) that we really liked,” Courtlandt racing manager Ernie Retamoza said. “This colt is just quality. Everybody knows it. That’s why we had to pay what we paid for him. We liked the sister a lot. I thought that the individual that he was made him easy to go for. We looked at him three or four times and each day he held up naturally, physically. We weren’t really hoping to spend that, but it’s tough in there.”

The second session of Book 1 of the September Sale starts Tuesday at 1 p.m. EDT.