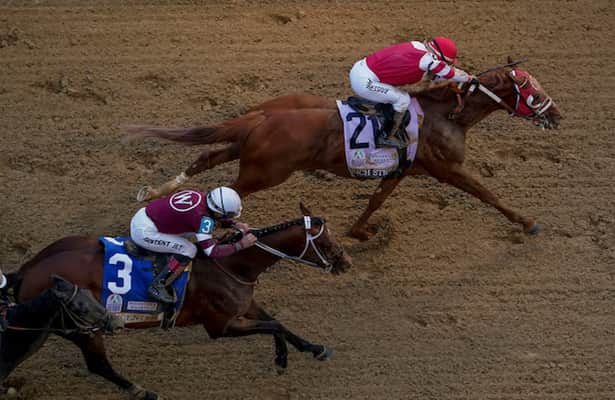 Steve Asmussen and Ron Winchell might still be in shock after watching their Kentucky Derby doughnut continue as Rich Strike ran down Epicenter on the first Saturday in May.

Luckily for Asmussen and his team, the wait is only two weeks for redemption in a compact Preakness (G1) field. It will not fully take the sting out of the Derby surprise, but it would be sweet nonetheless if Epicenter crosses the line first on Saturday at Pimlico.

Considering that Epicenter is likely to go off around his 6-5 morning line, it will not be as satisfying for most bettors unless they are able to pinpoint the right horses underneath. Below I predict the order of finish in the 2022 Preakness from 1 through 9, highlighting the best runners to key in the exotics.

1) No. 8 Epicenter - 6-5: Epicenter was able to work out out a good trip in Kentucky, but he should sit a perfect trip in the Preakness without having to expend the same energy he did while moving from eighth in the Derby. His tactical speed should place him close early from a cozy outside draw behind a slower pace. Once he puts away Early Voting, he will get first run on the closers and will not have to hold them off for as long at this shorter distance. Although it was disappointing that he was unable to defeat Rich Strike, let's not forget that he held a good horse in Zandon at bay after he took aim at him. He always shows up with a solid effort and has too much class and ability to suffer a repeat of the Derby. He is the best horse and should sit the best trip, equaling a Preakness victory.

2) No. 4 Secret Oath - 9-2: D. Wayne Lukas looks to pull off his seventh Preakness win with this talented filly, and he has as good of a chance as anyone if the favorite is upset. Her third-place finish against the boys in a subpar Arkansas Derby (G1) field has turned some off, but she had a tough trip that day and continues to mature and improve. Her Kentucky Oaks win was very impressive against a good field, and she has been the model of consistency in 2022. Fillies have held their own in what is considered the easiest of the three Triple Crown races for a filly to contest; do not be surprised if she puts up a good fight.

3) No. 2 Creative Minister - 10-1: It might be too much to ask off an allowance win, but I will take this colt's upside against almost any 3-year-old out there. Touted from the start, he has improved considerably in each of his three races, going from a 76 to a 83 to a 92 on the Beyer scale. Another improvement of 8 points seems possible based on his pattern, which would put him at 100. He finished with authority on the Derby undercard and if he continues to put everything together, he could prove to be this good.

4) No. 1 Simplification - 6-1: Like former Antonio Sano star Gunnevera, this honest colt will show up with a good race on a big stage, but he might be a step behind the very best in the division. The Kentucky Derby was the first time in seven starts on the dirt that he has been worse than third, but he was by no means disgraced while running a nice fourth. He is a solid horse to play in trifectas and superfectas, but I would be surprised if he wins.

5) No. 5 Early Voting - 7-2: I feel the best way to make money in this year's Preakness is to fade the second choice. The Wood Memorial (G2) has been remarkably unproductive in recent years, and this colt had everything his way in that race before being run down by the same Mo Donegal who could not catch Simplification for fourth in the Kentucky Derby. Do not be fooled by the inflated lofty speed figures. Every horse who ran in the Wood superfecta reached a new top significantly higher than anything they had before, showing that race is likely an anomaly. He will be pressed from Armagnac and Epicenter and will tire late.

6) No. 7 Armagnac - 12-1: This could be a polarizing horse in the Preakness as he has his share of positives, but he also has negatives that can be hard to overlook. I like that Irad Ortiz Jr. sees fit to ride and that they took the blinkers off and he responded with his best race to date with a solid figure. It is concerning that he has passed a grand total of one horse in five lifetime starts. His races that he did not get the lead, which also came against tougher and without Lasix, were very poor. I am not sure that he can get the lead from Early Voting. If he does not, his chances could be over early.

7) No. 9 Skippylongstocking - 20-1: As mentioned with Early Voting, I will gladly let 3-year-olds from New York beat me. He does have an improving pattern, but he would have to take another large step forward to contend. As the most experienced runner in the field, I do not see him having the upside to do so.

8) No. 6 Happy Jack - 30-1: The Kentucky Derby marked his fourth straight loss by double-digit lengths. He has yet to run a race that makes him competitive in a spot like this, and I do not see any reason to think he will suddenly turn that around.

9) No. 2 Fenwick - 50-1: After watching Rich Strike win the Derby, anything can happen, but I might be even more stunned if this colt wins. It is hard to back a colt fresh off running 11th by 36 lengths in the Blue Grass (G1). His maiden races, other than his win on an easy lead at Tampa, also were not very good. Look for him to be sent aggressively early as that would be his best chance.