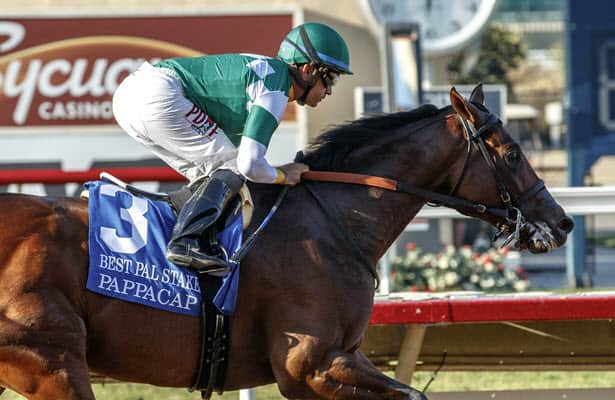 After a two-weekend pause, the Road to the 2022 Kentucky Derby resumes Saturday in New Orleans.

The Lecomte awards points toward the Kentucky Derby on a 10-4-2-1 basis. It is the second of Fair Grounds’ four Derby preps, following last month’s Gun Runner Stakes and preceding the $400,000 Risen Star Stakes (G2) on Feb. 19 and $1 million Louisiana Derby (G2) on March 26.

Pappacap enters the Lecomte leading the Road to the Kentucky Derby standings with 12 points. He finished second to Corniche in both the American Pharoah Stakes (G1) and Breeders’ Cup Juvenile, but that colt was ineligible for Derby points those races awarded due to trainer Bob Baffert’s suspension from Churchill Downs.

Epicenter (9-5) took the first leg of Fair Grounds’ Derby prep series in commanding fashion, scoring by 6½ lengths. Trainer Steve Asmussen has won the Lecomte three times, including in 2021 with Midnight Bourbon, who will race Saturday in the $150,000 Louisiana Stakes (G3).

War Emblem in 2002 became the first Lecomte starter to capture the Kentucky Derby. The race has produced two Preakness Stakes winners in the last decade with Oxbow (2013) and War of Will (2019).

Here is the field for the 2022 Lecomte Stakes (trainer and jockey in parentheses) with morning-line odds:

Laurie Ross and Ashley Tamulonis go head-to-head handicapping the Lecomte Stakes. One handicapper thinks Pappacap will back up his favoritism in this spot, while another has a local hope atop her ticket.

J. Keeler Johnson has two Lecomte starters among his horses to watch, along with a Kentucky Oaks prospect also running on the card.

Ron Flatter digs into the historical data and shows that Fair Grounds has not been a productive circuit for producing Kentucky Derby winners.

Casse spoke to Flatter about Pappacap and his other Road to the Kentucky prospects for an HRN Barn Tour.

Reinier Macatangay previews the Lecomte Stakes and shows that a speed horse is the top pick, even if the pace scenario looks on the fast side of things.

Here is a look at the other stakes races taking place Saturday at Fair Grounds. All post times are EST and will be broadcast on TVG.

Just Might (8-5) looks for a third straight Fair Grounds stakes score after winning the Thanksgiving Classic and, on Dec. 26, the Richard R. Scherer Memorial. Michelle Lovell trains the 6-year-old Justin Phillip gelding, who will have jockey Colby Hernandez up Saturday. Manny Wah (3-1) was second in the Richard R. Scherer Memorial for trainer Wayne Catalano and won this event in 2021. Norman Cash trains Sir Alfred James (5-1), who returns to the lawn after winning the Holiday Cheer Stakes on New Year’s Day over the synthetic track at Turfway Park.

Abscond (3-1) is a Grade 1 winner but has not captured a victory since scoring at that level in Woodbine's Natalma Stakes in September 2019. Eddie Kenneally trains and Adam Beschizza rides the 5-year-old Blame mare, fourth Nov. 6 at Del Mar in the Goldikova Stakes (G2) on the Breeders’ Cup Classic undercard. Grade 3 winner Summer in Saratoga (7-2) enters off back-to-back wins, including the local Blushing K.D. Stakes on Dec. 26 for trainer Joe Sharp. Paul McGee trains Pass the Plate (6-1), a Fair Grounds stakes winner who was fourth Nov. 20 at Churchill Downs in the Chilukki Stakes (G3).

La Crete (2-1) is favored for trainer Steve Asmussen in this race that pays Road to the Kentucky Oaks points on a 10-4-2-1 basis. Jockey Joel Rosario will be up on the Medaglia d’Oro filly, a debut winner Nov. 20 at Churchill. Al Stall Jr. trainee Fannie and Freddie (5-2) was second Dec. 26 in the Untapable Stakes, the first of Fair Grounds’ four Oaks preps. Todd Pletcher trains Sweet as Pie (5-2), who makes her first start since finishing Nov. 5 at Belmont Park in the Tempted Stakes.

Two Emmys (3-1) makes the first start of his 6-year-old season after a 5-year-old campaign highlighted by an Aug. 14 upset in Arlington’s Mr. D. Stakes (G1), the former Arlington Million. Hugh Robertson trains the English Channel gelding, who will have jockey James Graham up Saturday. Halo Again (6-1), who was eighth in the 2020 Lecomte, won Fair Grounds’ Buddy Diliberto Memorial Stakes on Dec. 26 for Asmussen. Jeremiah Englehart trains Bodecream (8-1), a Sam Houston stakes winner who ships to Fair Grounds off an Aqueduct allowance score Dec. 5.