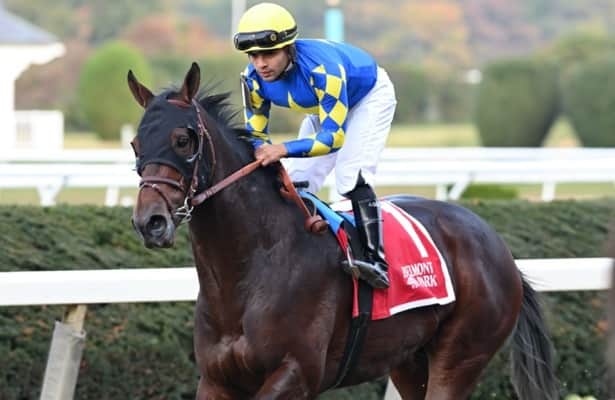 Prep races will take place Saturday at Aqueduct in the Jerome Stakes, Oaklawn Park in the Smarty Jones Stakes and Santa Anita in the Grade 3 Sham Stakes. All three races award Derby points on a 10-4-2-1 scale.

Here is a look at all three races. Post times are EST, and all races will be shown on TVG.

Cooke Creek is the 5-2 morning-line favorite for trainer Jeremiah O’Dwyer off a second-place run Nov. 7 to Rockefeller at Belmont Park in the Nashua Stakes (G3).

The Uncle Mo colt is 2-for-3 lifetime, with a Rocky Run Stakes score at Delaware Park also on his resume. Jockey Manny Franco stays aboard for the Jerome.

Ohtwoohthreefive (7-2) has made six starts for trainer George Weaver and was second Nov. 27 over the Aqueduct lawn in the Central Park Stakes. Hagler (4-1), trained by Rudy Rodriguez, enters on a two-race winning streak, and makes his stakes debut. Mr Jefferson (9-2) finished fourth in the local Remsen Stakes (G2) for trainer Michael Trombetta.

The Jerome Stakes first ran in 1866 but has been a wintertime Kentucky Derby prep since 2013. Winners Vyjack (2013) and Firenze Fire (2018) have both gone on to start in the Derby.

Related: Analysis: Use the outside speed horse in the Jerome | Rosario, Saez, Ortiz brothers lead top-earning jockeys in 2021

Here is the field for the 2022 Jerome Stakes (trainer and jockey in parentheses) with morning-line odds:

TimeformUS’ pace projections show Hagler going out to an early lead under jockey Jorge Vargas Jr., followed by Smarten Up and Courvoisier.

Home Brew, a homebred for Gary and Mary West, is 3-1 on the morning line in this full field of 14.

The Smarty Jones Stakes has run at Oaklawn since 2009, honoring the 2004 Kentucky Derby and Preakness hero. 2013 race winner Will Take Charge went on to earn that season’s Eclipse Award for top 3-year-old male thanks to Travers Stakes (G1) and Clark Handicap (G1) scores.

Here is the field for the 2022 Smarty Jones Stakes (trainer and jockey in parentheses) with morning-line odds:

TimeformUS’ pace projections show Ruggs going out to set a fast pace under jockey Julien Leparoux, followed by All in Sync and Kavod.

Stablemates Rockefeller (8-5) and Newgrange (2-1) are the two shortest prices on the morning line for the Sham. Both are ineligible to receive Road to the Kentucky Derby points this race awards due to trainer Bob Baffert’s two-year suspension from Churchill Downs.

Rockefeller was fourth behind eventual Breeders’ Cup Juvenile hero Corniche two starts back in the local American Pharoah Stakes (G1). He shipped cross-country to rebound at Belmont Park with a Nashua Stakes (G3) win and returns to Santa Anita with jockey Flavien Prat aboard.

Authentic in 2020 became the first Sham Stakes winner to score a victory in the Kentucky Derby. Last year’s victor, Life Is Good, missed the American Classics but returned in the season’s second half to win the Breeders’ Cup Dirt Mile.

Here is the field for the 2022 Sham Stakes (trainer and jockey in parentheses) with morning-line odds:

Here is a look at other stakes taking place Saturday across the U.S. Post times are EST, with all broadcast on TVG.

Strike Hard (2-1) is favored for this event that does not award Road to the Kentucky Derby points but leads into Gulfstream’s trio of points-paying preps. Jockey Junior Alvarado will ride the Flashback colt, a local allowance winner Dec. 5, for trainer Matthew Williams.  Bill Mott trains Graphic Detail (5-2), a debut winner Nov. 6 at Belmont Park. Simplification (3-1), was third Nov. 13 in a Gulfstream allowance race for trainer Antonio Sano.

Beer Can Man (5-2) won two of three starts in the second half of 2021 for trainer Mark Glatt, including an allowance race last out Nov. 7 at Del Mar. Jockey Flavien Prat gets the call on the 4-year-old Can the Man colt, a Grade 3 winner dating to 2020. Ruben Alvarado trains Commander (3-1), who was second to Beer Can Man in that allowance race. Momos (4-1) was second in a Churchill Downs allowance event Nov. 10 for trainer Michael Trombetta.

Luck (8-5) has been knocking at the door of a graded win, second Oct. 2 at Santa Anita in the Rodeo Drive Stakes (G1) and runner-up Nov. 25 at Del Mar in the Red Carpet Handicap (G3). Richard Baltas trains the 4-year-old Kitten’s Joy filly, who will have Prat up. Tim Yakteen trains Mucho Unusual (5-2), a Grade 1 winner whose four career graded scores include the 2020 running of this event. Stakes winner England’s Rose (5-1) was fourth last out in the Red Carpet for trainer John Shirreffs.

As Time Goes By (8-5) bounced back from an eighth-place finish in the Breeders’ Cup Distaff by winning the Bayakoa Stakes (G3) on Dec. 5 at Los Alamitos. Bob Baffert trains the 5-year-old American Pharoah mare, a two-time Grade 2 winner who Prat will pilot. Baffert also trains Velvet Slippers (5-2), who enters off a Nov. 19 allowance win at Del Mar. Moonlight d’Oro (3-1), a former 2021 Kentucky Oaks prospect, was third in the Bayakoa for trainer Richard Mandella.