2022 Kentucky Derby: Why December preps are a danger 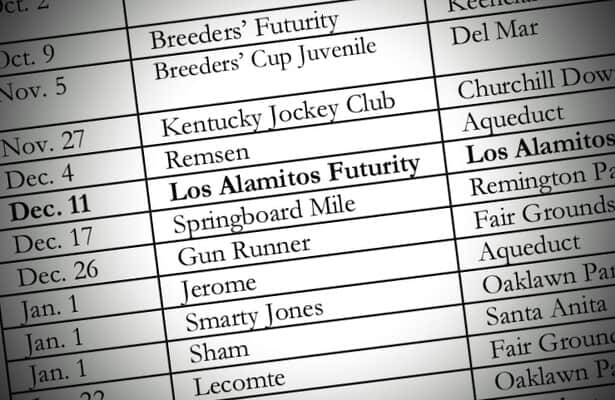 If there is one thing that is certain about futures betting on the Kentucky Derby, it is recency bias. Find the winner of the latest points prep, and shorter odds are sure to follow.

It happened again Saturday, when Slow Down Andy upset odds-on favorite Messier in the Los Alamitos Futurity (G2). Trained by Doug O’Neill, the son of 2016 Derby winner Nyquist went from 150-1 to 80-1 at Circa Sports in Las Vegas. The rival Caesars Sportsbook at William Hill Nevada cut Slow Down Andy from 140-1 to 60-1.

RELATED: See the latest Las Vegas futures for the Derby.

A different kind of history says that any Derby futures bet on a horse who wins a December points prep is a complete waste of money. Never mind winning. How about even starting a December race?

Of the 50 Derby winners since 1972, only 14 even started a race the last month they were 2-year-olds. Eight of them – Ferdinand, Alysheba, Sunday Silence, Thunder Gulch, Charismatic, Fusaichi Pegasus, Giacomo and Country House – lost. Cannonade did, too, but he went 1-for-2 in the December before his 1974 Derby win.

That leaves five more eventual Derby winners in the last 36 years who also won a December race. They included the late Medina Spirit, who finished first in a maiden race making his debut last Dec. 11 at Los Alamitos on his way to that star-crossed victory last spring in Louisville.

Winning Colors, the filly who won the 1988 Derby, followed her debut victory at Saratoga with an allowance score Dec. 27, 1987, at Santa Anita.

Get an early look at 2022 Kentucky Derby contenders.

Then there were the horses who won an ungraded stakes race in December, less than five months before their Derby triumphs. Cannonade did in the 1973 Aqueduct Handicap, which had been known as the Aqueduct Stakes. Unbridled won the 1989 What a Pleasure Stakes at Calder. California Chrome was victorious in the 2013 King Glorious, the last stakes run at Hollywood Park.

Research further reveals a grand total of one horse in the last half-century who won a graded stakes in the last month of the calendar year before his Derby triumph. That was Real Quiet, who finished first in the Hollywood Futurity (G1) in 1997 for none other than Bob Baffert.

This march through old racing charts is just a ponderous way of saying a December graded-stakes winner seldom translates into a cashable ticket on the Kentucky Derby. Since the sport traditionally winds down this time of year, and since trainers often rest their best horses to prepare for the rigors of the spring, and since there historically have not been many big races for 2-year-olds at the end of the year, why should 2021-22 be an exception?

Throw water, then, on any bets on Mo Donegal, the winner of the Dec. 4 running of the Remsen Stakes (G2) at Aqueduct. His 35-1 Derby futures price at both Caesars at William Hill and at Circa carries no value because there is no optimism to be gleaned from the last 50 Decembers. The Remsen might have produced six Derby victors in its history, but it has yielded none since Thunder Gulch 27 years ago. Back then, the Remsen was in November.

Fair warning then about the Los Al Futurity, Friday night’s Remington Springboard Mile and the inaugural running Dec. 26 of the Gun Runner Stakes at Fair Grounds. There is obviously no history to speak of on the last race, but the first two never have spawned Derby winners at their current homes.

And again, December. The history speaks for itself.