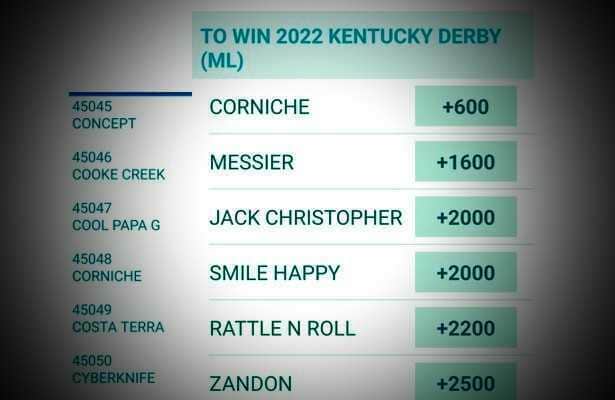 Mo Donegal beat Zandon by a nose in their bumpy, head-to-head matchup in Saturday’s Grade 2 Remsen Stakes at Aqueduct. But in Las Vegas, Zandon is shorter priced than Mo Donegal in the Kentucky Derby futures market.

How was this explained? As usual, it came down to one word. Exposure.

“We took decent action prior to (Saturday’s) race,” Circa’s Paul Zilm said Sunday night. “I took the action on Zandon at 50-1. Nobody has bet Mo Donegal yet.”

Paul Bach of Caesars at William Hill also said “liability” was a factor in shortening Zandon. So, too, was the merit of the Upstart colt’s performance against Mo Donegal.

“They ran each other to a nose decision,” Bach said. “It was Zandon’s first time going two turns, so I give him more room for improvement.”

Circa also “took a good bet on Sir London (on Sunday) morning,” Zilm said, referring to the Malibu Moon colt’s move from 125-1 to 75-1. After his 10-length, maiden-breaking victory Saturday at Los Alamitos, Sir London held firm at 100-1 at Caesars at William Hill.

Breeders’ Cup Juvenile winner Corniche is still the consensus favorite. While he held steady at 6-1 at Caesars at William Hill, the Bob Baffert-trained colt by Quality Road went from 9-1 to 10-1 at Circa.

The two Nevada bookmakers have a total of 242 horses listed in their Derby futures.