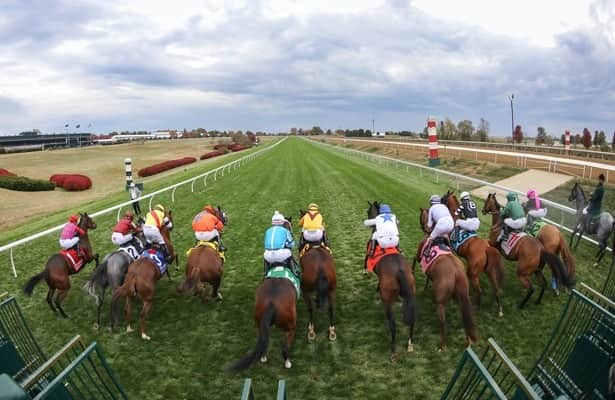 Don't blink or you might miss the Breeders' Cup Juvenile Turf Sprint. The 2022 edition of the grass dash might be short in distance, but it could be long on value.

A full international field filled with speed features a 7-2 favorite and has chaos written all over it. There will be Breeders' Cup races later in the weekend where taking a stand with a short-priced single makes sense, but this is not one of them. In one of the weekend's most unpredictable races, it is imperative to demand value. I keep that in mind below when predicting the order of finish for the year's 5 1/2-furlong Juvenile Turf Sprint from first to last.

1. No. 4 Dramatised, 15-1. This European filly has been favored in all three of her career starts, including a dominant victory over Love Reigns at Royal Ascot. She is a tremendous value at anywhere near 15-1. Trainer Karl Burke has exuded confidence throughout her career, and he has every right to be excited about her prospects in America. Her last effort, which was subpar for her standards, came on what appeared to be the less favorable part of the turf course when she was ridden more aggressively than she will be this time around. She cuts back in distance and should be able to draft in behind the anticipated hot pace before unleashing her late run.

2. No. 2 Love Reigns, 4-1. Wesley Ward has a stronghold on turf sprints, and this filly is very formidable in this spot. Her debut over this course was sparkling, and her last win at Saratoga stands out among North America's contenders for this race. She was defeated on the square by Dramatised, but it would not be a surprise if she turned the tables on her home turf.

3. No. 7 Oxymore, 8-1. Chad Brown's gelding was impressive on debut and though some would say he regressed since, that is not necessarily the case. He was in close quarters when looking defeated in the Skidmore but took off and drew away again as soon as Jose Ortiz created room and was able to go to his right hand. He will appreciate cutting back to a sprint after routing last time and should be able to sit off the main speed and pounce with the bottom from that route try underneath him.

4. No. 5 Mischief Magic, 8-1. It is impossible to dismiss anything from the Charlie Appleby barn, and this colt has the class to contend in this race. He owns a win around a bend and has shown he can pass horses in a race full of speed. He is likely to take money as the first runner of the weekend for this stable and will be coming late.

5. No. 12 The Platinum Queen, 7-2. This feels too low for the runner with undoubtably the best credentials in this race. Not only is she a Group 1 winner, but she defeated older rivals while doing so, which is almost unheard of for a 2-year-old. Although she might have the most talent, she does not have the best setup in here. She will have to contend with a plethora of other speed from a wide draw while traveling a half-furlong longer than she is accustomed to.

6. No. 3 Private Creed, 12-1. He is a bit slower than the prime contenders in this race, but he should get a good setup for his closing style. He has a win over this course and will be coming late for Steve Asmussen.

7. No. 6 Persian Force, 15-1. It is hard to argue with anyone who wants to take a shot with this runner at this big price. He has shown consistency, speed and class in Europe. He defeated Mischief Magic narrowly last out, but unlike that colt, his connections have historically struggled in the Breeders' Cup.

8. No. 1 Lady Hollywood, 15-1. The filly already owns four wins on the turf, but she may have lost her best chance at the draw. She likes to run near the front and will have a tough time working out a good trip from the rail.

9. No. 11 Speed Boat Beach, 6-1. He might end up being one of the best sprinters in this field in the long run, but his success is likely to come on the dirt. He is in this spot because of the distance rather than the surface. It is tough to have confidence in Bob Baffert in a turf sprint, and this runner will face tougher competition on the front end than he did in the Speakeasy Stakes at Santa Anita.

10. No. 9 Sharp Aza Tack, 15-1. He will appreciate cutting back in distance, but he showed in his last start that he might need to  have the early lead to be at his best. With Tyler's Tribe and Speed Boat Beach drawn directly outside of him, he will not catch any breathers early on.

11. No. 8 American Apple, 20-1. She could contend for a piece with a repeat of her last effort, but was it a fluke? It is hard to put trust in her win at 47-1 when her previous four races would make her hard to bet in an allowance race, never mind this spot.

12. No. 10 Tyler's Tribe, 15-1. This gelding is a cool horse with a great story and tons of talent, but he is unlikely to be able to strut his stuff while trying turf for the first time. He does not have much turf breeding and will have to duel with multiple proven turf runners.