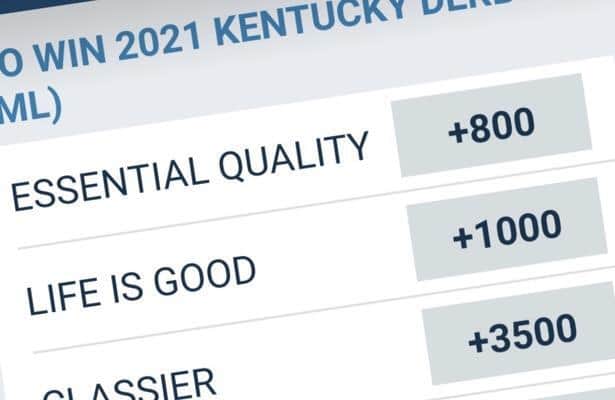 Whether it is pari-mutuel wagering or fixed odds, two horses have been separated by horseplayers and bookmakers from the pack of contenders for the 2021 Kentucky Derby.

With the big two idle for now, most of the movement in the William Hill futures came as a result of Saturday’s races at Churchill Downs.

An allowance winner on the undercard Saturday at Churchill Downs, 2-for-2 Mandaloun went to 75-1 from 110-1. Owned by Juddmonte Farms and trained by likely Eclipse Award winner Brad Cox, he is by Into Mischief. The stallion — who also has Life Is Good and this year’s Derby winner Authentic on his résumé — closed as the 4-1 favorite in the Kentucky Derby Sire Future Wager.

The bull market on Into Mischief babies, though, ends with Highly Motivated. He slipped to 75-1 from a 30-1 third choice. Since winning the black-type Nyquist Stakes early this month on Breeders’ Cup Friday, he has not had a timed workout for trainer Chad Brown.

Five horses were added to the William Hill futures since last week, bringing its list to 138.

Beep Beep (125-1): The Whitney Stables homebred won his debut on closing day Sunday at Churchill Downs, chasing the pace before overpowering a rival in the stretch of the seven-furlong race. Trained by Norm Casse and ridden by Joe Talamo, the Tapizar colt is out of the Birdstone mare Speedy Bird.

Parnelli (125-1): The $500,000 Quality Road colt out of the Bernardini mare Sip Sip broke his maiden on his fourth try for trainer John Shirreffs, coming through with jockey Drayden Van Dyke in a two-turn mile Saturday at Del Mar. His two most recent losses were over the same distance by just a neck to Hot Rod Charlie (50-1) and Spielberg (75-1), both of whom have been Grade 1 runners-up.

Return the Ring (125-1): This Maryland-bred set the pace as the third choice among seven starters in his six-furlong debut Saturday at Aqueduct, winning with jockey Dylan Davis by 1 3/4 lengths. From the small stable of Ed Barker, the Speightster colt has been through the sales ring twice, most recently bought in May by Iris Smith for $130,000.

Swiftsure (125-1): A debut winner at six furlongs Saturday at the Fair Grounds, this pacesetter ridden by Shaun Bridgmohan comes from the deep stable of Steve Asmussen, who is also his co-owner. The colt by Uncle Mo out of the Speightstown broodmare Island Saint was bet down to 11-10 on the strength of a bullet gate work and a follow-up 1:00.0 breeze over five furlongs on the New Orleans track.

Swot Analysis (140-1). Named for the business acronym that stands for strengths, weaknesses, opportunities and threats, this Mark Casse trainee broke his maiden in his second start. Eased to the wire by jockey Declan Carroll, the first-crop Anchor Down colt still drew away by 9 3/4 lengths Friday at the Fair Grounds against 11 rivals, eight of whom were making their debuts. Leonard Green and Chuck Zacney bought Swot Analysis during the summer for $62,000.

William Hill’s exclusive hold on domestic, fixed-odds futures is expected to end this week, when Circa Sports of Las Vegas posts its opening Derby odds.

Following is William Hill’s full list of Kentucky Derby futures. Last Monday’s odds are in parentheses where there were changes.