2021 Breeders' Cup will be 1st with restrictive riding-crop rule 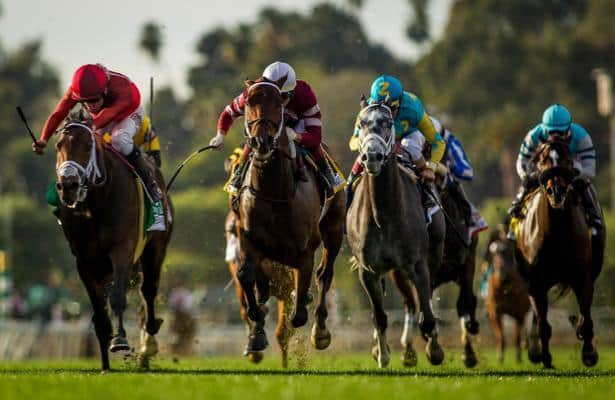 An international cast of jockeys will converge on Del Mar next week to compete for their share of $31 million in total purse money as part of the two-day Breeders’ Cup. For riders from outside of California, things will not be business as usual when the starting gate springs.

On Oct. 1, 2020, California put into effect one of the strictest riding-crop rules in North America. The regulation adopted by the California Horse Racing Board limits jockeys to no more than six total strikes during a race with only two allowed in succession before allowing a horse time to respond.

Perhaps even more notable, California requires the crop to be used only in the “underhanded” position. This regulation proved particularly burdensome for some veteran California-based riders. Among those was Hall of Famer Mike Smith. Soon after it took effect, Smith, who has won a record 26 Breeders' Cup races, likened the underhand rule in an interview with Horse Racing Nation to “being right-handed and having to throw with your left. It is awkward.”

“It definitely takes adapting to,” said Joe Bravo, who left behind even stricter rules in New Jersey to ride this year in California.

Bravo has been riding in races for more than three decades, predominantly in New Jersey, where he was a perennial leading rider. That all changed this year after New Jersey took the added step of outlawing the use of the riding crop entirely other than for matters of safety.

For Bravo, that was a step too far. In June, the jockey known as “Jersey Joe” moved his tack to California. He told HRN this week there was a notable learning curve involved and that it did take some time to get comfortable with the state's crop rule.

He added it could prove a difficult transition for jockeys from outside jurisdictions to adhere to California's riding-crop policy without penalty.

“Not being able to turn your stick in an upward motion can be difficult,” said Bravo, who will ride Pappacap in the Breeders' Cup Juvenile for trainer Mark Casse. “It’s really going to be interesting coming up to the Breeders’ Cup.”

For international jockeys, the riding-crop rule in California will be stricter than anything they currently encounter. For example, in England, where Breeders’ Cup-bound jockeys such as Frankie Dettori and Ryan Moore largely ply their trade, the crop can be used a maximum of seven times in a race. While it cannot be raised above the shoulder, there is no restriction to “underhand” use as in California.

“You’re going to have guys from all over the world at the Breeders’ Cup. How are they going to adapt?”  Bravo asked. “And really, how are the stewards going to handle the situation? They have got to be informed that these riders are not used to riding under these conditions.”

Under the California rule, a jockey who violates the riding-crop rule is subject to a minimum fine of $500 and three-day suspension. The discipline can be stiffened at the discretion of the stewards, based on the egregiousness of the violation.

While certainly noteworthy, the punishment is not nearly as severe as what was considered by California regulators earlier this year with the Breeders' Cup in mind. In March, the CHRB took up a proposal that would have docked jockeys' 50 percent of their purse earnings for a crop violation if finishing first, second or third in a graded-stakes race. That plan was tabled by the CHRB on a split vote of 4-3.