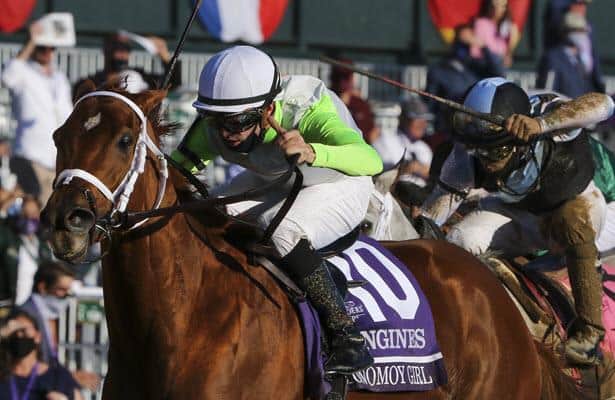 During a time of year where 3-year-old colts dominate the conversation, a pair of champion females take center stage Saturday at Oaklawn Park.

“I’m sure it will be the most watched race up to this point this year,” Monomoy Girl trainer Brad Cox said.

The Tapizar mare Monomoy Girl started 2021 by winning the local Bayakoa Stakes (G3) in February. She has won six straight starts dating to 2018, including a pair of Breeders’ Cup Distaff triumphs.

Monomoy Girl sports a sparkling 16: 14-2-0 record with nearly $4.6 million in earnings. Jockey Florent Geroux gets the mount Saturday, just as he has for each of her last 14 starts.

An Apple Blossom win would mark the eighth Grade 1 victory in Monomoy Girl’s career. She has drawn widest Saturday in a field of six.

“She always seems to draw outside,” Cox said. “It’s like crazy. We’re OK with that. I don’t think post or size of field is going to have a lot to do with it.”

Swiss Skydiver’s 3-year-old campaign included victories in the Alabama Stakes (G1) and Preakness Stakes, the latter in a classic stretch duel against fellow champion Authentic. But it ended on a sour note, with the Daredevil filly stumbling at the start of the Breeders’ Cup Distaff and finishing seventh.

The poor start in the Breeders’ Cup eliminated any chance for Swiss Skydiver to give race winner Monomoy Girl a proper battle. She faces her for a second time Saturday in the Apple Blossom.

“It’s good for racing, I believe,” Swiss Skydiver jockey Robby Albarado said. “You see on social media, everybody’s talking about it. This is what people want to see in racing. It’s exciting to have two queens meeting this early in the year.”

Swiss Skydiver already owns a Grade 1 victory this year thanks to a Beholder Mile score last month at Santa Anita.

“We got beat like an inch,” McPeek said. “I just hope the outcome is different this time.”

Looking to the rest of the field, the shortest price on the morning line is Letruska (4-1) for trainer Fausto Gutierrez. She owns a trio of Grade 3 wins since leaving Mexico for the U.S. in 2019 and was second by a head last month in Oaklawn’s Azeri Stakes (G2).

Here is a look at the 2021 Apple Blossom Handicap field (trainer and jockey in parentheses) with morning-line odds:

TimeformUS’ pace projections show Letruska going out to an uncontested lead under jockey Irad Ortiz Jr. in a race that could favor a runner on or near the early lead. Monomoy Girl and Swiss Skydiver are expected to settle in second and third, respectively.

Matt Shifman goes through the Apple Blossom field, offering an analysis on each runner.

Reinier Macatangay says that Letruska is the one viable Apple Blossom alternative to Monomoy Girl and Swiss Skydiver. See why he says she can play the role of spoiler.

Trainer Fausto Gutierrez spoke to Oaklawn’s publicity team about Letruska’s path from Mexico to U.S. racing. He says his filly does not “have anything to lose” facing Monomoy Girl and Swiss Skydiver.

Courtesy of the National Thoroughbred Racing Association, here is a look at other graded stakes action taking place Saturday across the U.S.

Trinity Farm’s homebred 7-year-old gelding Red Knight, winner of last fall’s Sycamore (G3) at Keeneland, drew the outside post position in a field of 10 runners for Saturday’s $200,000 Elkhorn Stakes (G2) going 1½ miles on the grass. Listed as the 3-1 morning-line favorite, Red Knight, trained by Bill Mott and ridden by James Graham, finished second in the 2019 edition of the Elkhorn. Joseph Allen’s North Dakota, fourth to Red Knight in last year’s Sycamore, will be making his first start since finishing 10th in the Pegasus World Cup Turf Invitational (G1) in January for trainer Shug McGaughey. Three Diamonds Farm’s Tide of the Sea, trained by Mike Maker, won a 1½-mile allowance race at Keeneland last October, and captured the W. L. McKnight (G3) at Gulfstream Park on Jan. 23, also at 1½ miles.

A wide-open renewal of Saturday’s $1 million Oaklawn Handicap (G2) at 1 1/8 miles could be the right spots for shippers from California and Florida among the 10 horses entered. CRK Stable’s 4-year-old Express Train, trained by John Shirreffs, is in from the West Coast following a second-place finish in the 1¼-mile Santa Anita Handicap (G1) on March 6, and a 3¼-length victory in the San Pasqual Stakes (G2) prior to that. The Todd Pletcher-trained and lightly raced 5-year-old gelding Fearless won the Gulfstream Park Mile Stakes (G2) last out Feb. 27 for his fourth win in seven starts. Rupp Racing’s Owendale was second by a head in the New Orleans Classic Stakes (G2) at the Fair Grounds on March 20 and was third in Oaklawn’s Razorback Handicap (G3) on Feb. 27. Winchell Thoroughbreds and Willis Horton Racing’s 4-year-old Silver State is 2-for-2 at Oaklawn this year, including a neck victory over Danny Caldwell’s Rated R Superstar in the 1 1/16-mile Essex Stakes on March 13.

The 4-year-old Independence Hall, third in the Pegasus World Cup Invitational (G1) and fourth in the Santa Anita Handicap, is the 8-5 morning line favorite against four rivals in Saturday’s Californian Stakes (G2) at Santa Anita Park for trainer Michael McCarthy. Brazilian-bred Royal Ship, trained by Richard Mandella, is seeking his first win in the U.S after winning five straight in his home country in 2019. The bay 5-year-old gelding returns to the main track following a fifth-place finish in the Frank E. Kilroe Mile (G1) at Santa Anita on March 6. Magic On Tap, a 5-year-old son of Tapit, trained by Bob Baffert, steps into stakes company for the first time following an impressive 1 1/16-mile allowance win in over the track March 28.