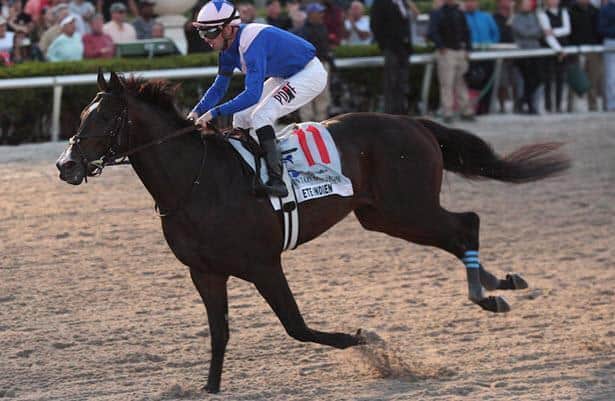 A prominent prospect on the Road to the Triple Crown last year before going to the sidelines, Ete Indien is scheduled to make his first start in more than a year in Sunday’s $100,000 Bob Umphrey Turf Sprint at Gulfstream Park.

The Umphrey, a five-furlong turf sprint that offers a $25,000 ‘Win Only’ bonus to Florida-bred entrants, is featured on Sunday’s Fourth of July program, wrapping up Summit of Speed Weekend, which will be highlighted by the $350,000 Princess Rooney Invitational (G2) and the $200,000 Smile Sprint Invitational (G3) on Saturday’s card.

Ete Indien was a leading 3-year-old last year after setting the pace to finish second behind Tiz the Law in the Holy Bull (G2) and capturing the Fountain of Youth (G2) by 8½ lengths. The son of Summer Front went on to finish third behind Tiz the Law after setting a pressured early pace in the Florida Derby (G1). Unfortunately, due to the COVID pandemic, the Kentucky Derby and Preakness Stakes were postponed from their traditional May dates.

“For us, it was very disappointing because my two horses – he and Sole Volante – were at the top of their game,” trainer Patrick Biancone said. “Everything changed. One got hurt and the other one lost his form. But the racetracks were great, protecting everybody and keeping them safe and keeping everybody working.”

Ete Indien would race only once more last year in a June optional claiming allowance, weakening to finish fourth behind stablemate Sole Volante after setting a pressured pace.

“He’s trained extremely well, but when you have not run for a year, you cannot expect to have the horse super-tight. He had a little hiccup, and he’s recovered from everything now. He’s happy, sound and very strong,” Biancone said. “He strained one of his ankles. He should have been ready to run in March, but unfortunately, one morning, he put his legs over the (stall) door, and I lost another three months.”

Biancone is happy with what he sees in Ete Indien one full year after he established himself as one of the best 3-year-olds in the country.

Ete Indien has already had success on turf at the five-furlong distance, having closed from off the pace to capture his career debut in September 2019. The Kentucky-bred colt finished off the board following an extremely wide trip in the Bourbon Stakes (G3) over Keeneland’s turf course in his second start. He rebounded in his dirt debut next time out, scoring a front-running 2½-length optional claiming allowance that preceded his most encouraging performances in the Holy Bull, Fountain of Youth and Florida Derby.

“I like the five furlongs on turf for a comeback because it’s not too hard on them,” Biancone said. “We go back to scratch. He’s had a year off. We got back to where he started.”

Florent Geroux, who was aboard for Ete Indien’s Fountain of Youth romp, has the call.

Glen Hill Farm’s Caribou Club, a multiple graded stakes-winning 7-year-old gelding with more than $700,000 in earnings, looms as a strong contender in the Umphrey after notching a victory in his first career start at the five-furlong distance on turf in a May 22 overnight handicap at Gulfstream.

Edwin Gonzalez has the return call on Caribou Club.

Too wide: Medina Spirit will not go to Pennsylvania Derby
Medina Spirit , the 2-1 morning-line favorite for...