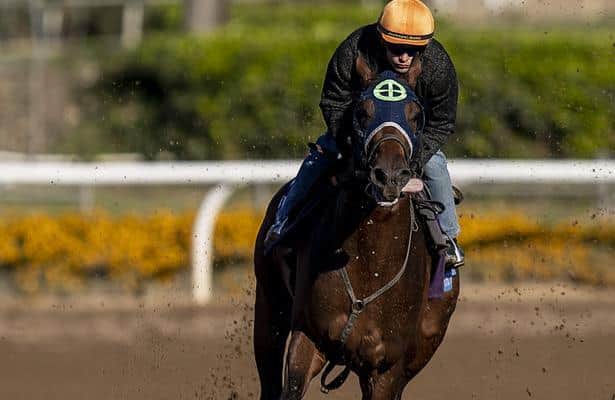 Before Storm the Court ran an even fourth Sunday in Santa Anita Park’s San Vicente Stakes (G2), co-owner Ryan Exline told TVG that “we always viewed this race as a sharpening drill for him.”

The goal was, win or lose, to proceed to the 2020 Kentucky Derby trail with a fresh Eclipse Award and Breeders’ Cup Juvenile winner in need of only a few more qualifying points.

And that’s what Storm the Court, the Peter Eurton-trained son of Court Vision, will do. But expectations were certainly tempered as he hit the wire 2 1/4 lengths back of Nadal in the San Vicente.

Pool 2 of the Kentucky Derby Future Wager closed Sunday with Storm the Court at 50-1. That was also before the San Vicente, a seven-furlong event.

On this week’s updated latest Las Vegas odds sheet, Storm the Court saw a small break in price, increasing from 12-1 to 15-1; that’s a reflection, too, of the amount of money that came in on him over the winter.

“This came up a little tougher than what we thought it would,” Exline added to TVG, “but I think we’ll get a measuring stick test today to see where we’re at and what we need to do moving forward.”

Storm the Court remains somewhat of an enigma now with Eurton saying he’ll look for a 1 1/8-mile major Derby prep next. A debut Del Mar winner, Storm the Court lost his jockey early in the Del Mar Futurity (G1).

The San Vicente marked his first one-turn race since then. In between, Storm the Court ran a similarly non-threatening third in the American Pharoah Stakes (G1), then added blinkers when upsetting the Breeders’ Cup Juvenile on the front end.

As far as Vegas favoritism, there was no change this week. The recent Holy Bull (G3) hero Tiz the Law stuck at 6-1, while Dennis’ Moment has assumed the role of second choice at 8-1 ahead of his season debut in the Fountain of Youth (G2).

Nadal remained 10-1 off his victory, while Independence Hall slipped two points to 12-1 after being defeated for the first time in the Sam F. Davis Stakes (G3). The Davis winner, Sole Volante, went from 60-1 to 14-1.

Also of note with some sharp players in Las Vegas for the National Horseplayers Championship over the weekend: Basin, the Hopeful (G1) winner gearing up for his 2020 debut, dropped from 50-1 to 20-1, a sign he took a sizable bet.

William Hill’s Derby futures can be played at its properties in Nevada. Here’s a full look at the board: