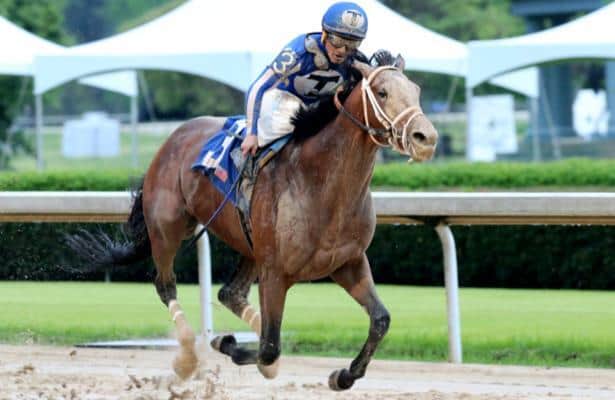 The plan for Mr. Big News was supposed to be a turf debut Saturday at Churchill Downs. It was not supposed to include rainy weather early this week that might leave the grass a little soft this weekend.

So owner Chester Thomas and trainer Bret Calhoun turned to Plan B: the Kentucky Derby.

“I could tell the last couple days that Chester was catching the Derby fever worse and worse,” Calhoun said with a laugh Monday. “So we made a change in direction this morning.”

Presuming three horses with prep points do not bump him with an 11th-hour surprise, Mr. Big News will be entered for Tuesday morning’s Derby draw, now expected to include 18 horses. A black-type stakes winner, he is a certain longshot; Circa Sports in Las Vegas reopened him at 110-1 in its futures.

“We’re a big underdog, no doubt,” Thomas said in a Monday telephone interview from Kentucky. “But our horse is going to like the distance.”

Coming back from a sixth-place finish July 11 in the Blue Grass Stakes (G2) at Keeneland, Mr. Big News was going to be entered on the Derby undercard in Saturday’s American Turf Stakes (G2), an 8 1/2-furlong race for 3-year-olds.

“I thought it was time to go a new direction,” Calhoun said in a separate phone call from Churchill Downs. “He’s really bred top and bottom for turf (by Giant’s Causeway out of a Galileo mare). We’ve been able to train him twice on the turf at Churchill in the past week. But it’s been pretty soft, and it’s been raining. The turf course is holding a lot of moisture and staying on the soft side. We didn’t really know if that was going to give us a fair assessment of him on the grass or not.”

Mr. Big News is also a deep closer, so the 1 1/4-mile Derby distance could be made to order for him — not to mention the surplus of early speed in the race.

“The mile-and-a-sixteenth might be a little short for him,” Thomas said. “If it was a firm turf course, we might not have been thinking otherwise. We thought it was going to be a full field in the Derby, and we were not going to have the points. But with attrition, spots opened.”

“Putting all those factors together, we made the last-minute changes this morning,” Calhoun said.

Gabriel Sáez will ride Mr. Big News, the fourth Derby mount of his career. He finished second in 2008 on the filly Eight Belles before she suffered a catastrophic breakdown in the run-out that led to her being euthanized on the track.

After Mr. Big News finished fifth in one of the two divisions of the Risen Star (G2) in February, Sáez replaced Robby Albarado and rode him to an April victory in the Oaklawn Stakes. Although the race was ungraded, it came up big since it was the first time back from pandemic shutdowns for many of the 13 starters. (Thousand Words finished 11th that day as the favorite.) But hopes raised by that victory were dashed nearly eight weeks ago at Keeneland.

“We didn’t really get the trip that we thought that he wanted in the Blue Grass,” Calhoun said.

That was also the case when Sáez rode By My Standards for Thomas and Calhoun in last year’s Derby. They got bottlenecked coming out of post 3, bumped into Game Winner near the half-mile pole and finished a flat 12th — promoted to 11th when Maximum Security was disqualified.

“The trip and the wet track,” Calhoun muttered when he was asked about a possible dose of redemption Saturday. “If they wanted the track to get bad like it was last year, I’d be fine with that this year.”

So a move to turf can wait for Mr. Big News. Instead, he will provide a second Derby chance to Thomas, who made his money in coal and energy.

“Being a Kentucky native, not too many of us have this shot at being in the Derby two years in a row,” he said. “So, yeah, we’re going to take a big swing, and hopefully we can get lucky.”

Just make sure to wear the right shoes for the occasion. No, not Messrs. Thomas and Calhoun. That order came from the owner to the trainer for the horse.

“The question I had for Brett this morning was, ‘Have you already put turf shoes on him?’ He said, ‘No, I haven’t. I’m waiting to figure the shoes I’m going to put on hm.’ ‘Well,’ I said, ‘You know which ones to put on him now.’ We’ll go with the big-race shoes, and we’ll see what happens.’ ”