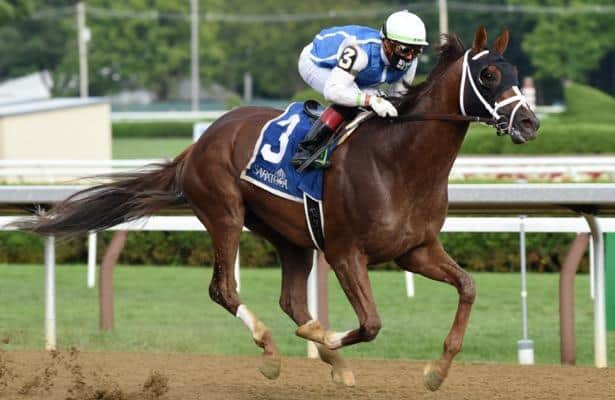 Wertheimer and Frere's Grade 2-placed homebred Spinoff, a veteran of last year's Triple Crown trail, swept to the lead on the far turn and turned back favored Endorsed through the stretch to earn his first stakes victory in Sunday's eighth running of the $85,000 Alydar at Saratoga Race Course.

It was the third career win in the Alydar for Saratoga's leading rider Irad Ortiz Jr. as well as Todd Pletcher, who moved into first place in the meet's trainer standings with his 16th victory at the summer stand.

Spinoff won for the first time in four tries this year, having been beaten a neck when second in the Sunday Silence on May 17 over a sloppy track at Gulfstream Park. After coming up empty in a one-mile optional claiming allowance last out July 2 at Belmont Park, he bounced back with a huge effort in the Alydar.

"He ran really well here last year in a mile and an eighth two-other-than and had a pretty rough trip last time and I think he ran better than it looked on paper," Pletcher said. "We had good spacing to this and we had been pointing to it for a while. He's trained well and I thought we were going to get a good setup. The race kind of unfolded exactly how Irad and I talked about before the race and it's nice when it falls into place."

Ortiz Jr. settled Spinoff in the clear three wide as Its All Relevant, a winner of two straight and three of his last four races, was in front through a quarter-mile in 24.97 seconds and a half in 49.57, under moderate pressure from Bodexpress. Its All Relevant's lead shrunk as the field hit the turn and Spinoff and Bodexpress ranged up to challenge.

Spinoff came off the turn in front and was set down for a drive to the wire by Ortiz Jr. as Endorsed, the 3-5 favorite who ran fourth in last year's Grade 1 Travers, tried to mount his bid on the far outside but was unable to gain any ground. Spinoff crossed the wire 2¾ lengths in front, while there were 4½ lengths between Endorsed and Bodexpress in third followed by Backsideofthemoon and Its All Relevant. Tenfold was scratched.

Third in the Saratoga Special (G2) as a 2-year-old in 2018, Spinoff ran second in the Louisiana Derby (G2) to punch his ticket to the 2019 Kentucky Derby where he ran 18th. After skipping the Preakness, the chestnut showed up in the Belmont Stakes and ran sixth, beaten only three lengths, before a failed bid on turf in the Belmont Derby (G1). His sophomore season ended when he rolled home 5¾ lengths the best in a nine-furlong optional claiming allowance last August at Saratoga.

"It's rewarding," Pletcher said of the Alydar win. "He's a horse we always had high hopes for. We placed him pretty ambitiously. He's always been right on the verge of breaking through so hopefully, as a 4-year-old, maybe he can take it to the next level."

Pletcher also won the first running of the Alydar in 2013 with Vitoria Olimpica and followed up with Rally Cry in 2017. Ortiz Jr. was first with Farhaan in 2014 and Royal Posse in 2016.

"My horse ran a great race today," Ortiz Jr. said. "Last time, he got in a little trouble. He relaxed so well today, and the race set up for him. In the turn, he relaxed in the clear and when I asked him to go, I got plenty from him."