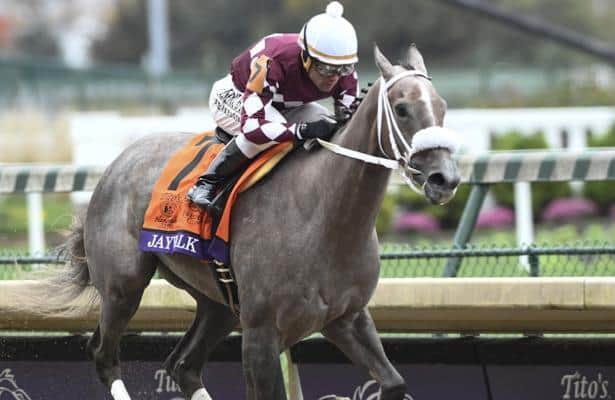 Jaywalk, the champion 2-year-old filly, parlayed an equipment change into a return to form Saturday with a romping victory in Delaware Park’s Grade 3, $300,000 Delaware Oaks.

The daughter of Cross Traffic dropped in class for her first win over four tries at 3. In her first three races as a sophomore, she was fourth March 2 in Gulfstream Park’s Davona Dale Stakes (G2), third April 6 in Keeneland’s Ashland Stakes (G1) and then a disqualified 13th last out May 3 in Churchill Downs’ Kentucky Oaks.

Trainer John Servis put blinkers on Jaywalk on Saturday, and she broke to the lead in a six-filly field, setting fractions of :24, :47.3 and 1:09.1.

Fashion Faux Pas, a two-time black-type stakes winner, was the only rival to challenge Jaywalk into the far turn. The challenge was short lived, as Jaywalk and jockey Joe Bravo sped away for a seven-length win, covering 1 1/16 miles in 1:43.1.

“When she came back after her first race earlier in the year, I thought maybe she needed the race, so I started bearing down on her a little bit with her works and that is probably the worst thing I could have done,” Servis said. “She just did not respond well to it. She is the kind of filly that can go out there and work fast, and you saw the fractions today and he did not lay the stick on her, so we just wiped the slate clean, gave her a little bit of time, and freshened her.

"We went back to the old routine with what we did last year with the two minute licks and putting those long quicker miles in her, and she responded. That was my girl today. It felt very very good when she started opening up. You know with horses, sometimes you got to figure them out and we get caught up in the shuffle sometimes and you got to go back to square one."

D.J. Stable LLC and Cash is King LLC campaign the Kentucky-bred Jaywalk, who paid $4.80 to win. Fashion Faux Pas and Ujjayi rounded out the board.