2017 Preakness Meet Ends in Ties for Leading Jockey and Trainer 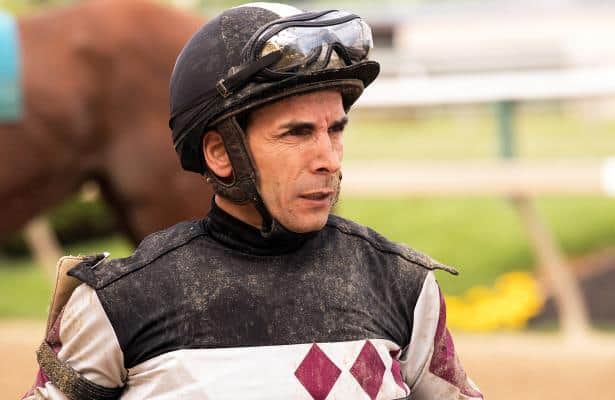 The curtain came down on a record-setting 2017 Preakness Meet at Pimlico with a handful of jockeys and trainers sharing top honors in their respective standings following a special Memorial Day holiday program Monday at historic Pimlico Race Course.

Entering Monday with a one-win edge over seven riders including Lynch and Gomez, Karamanos, 43, was held winless but earned his fifth career riding title in Maryland and first since Pimlico’s 2010 spring meet. His biggest victory came aboard Recruiting Ready in the Maker’s Mark Chick Lang May 20.

“I feel so happy to be tied for leading jockey. It was an even meet for everyone. I think we have a lot of talented riders right now,” he said. “I’m happy I was able to ride some good horses and win a stake on Preakness Day. It’s a short meet and so many horses come in from out of town, so it’s hard to win. I want to just ride my races and do my best.”

Gomez tied Karamanos with his victory aboard Unaquoi ($13.20) in the seventh race. Four of his winners came during the meet’s final weekend, including a riding double May 27. It is the first title for Gomez, 23, who came to the U.S. from Guatemala in 2015.

“It’s amazing. I didn’t think I was going to have a meet like this to be part of three riders for the title but now that it’s done I’m very happy,” Gomez said. “Hard work pays off, like they say. My agent, Frank Douglas, is working hard with me so I think we’re a good combination. I’m ready for Laurel.”

Lynch, 39, moved into a position to challenge for the meet title by sweeping the final two races Sunday. He won Monday’s eighth race with 3-5 favorite Ascertain ($3.20) for Hall of Fame trainer Bill Mott to earn a share of his first title since relocating to Maryland last spring.

In addition to his wins Lynch finished with a meet-high 13 second-place finishes including two Monday as well as Lights of Medina in the $250,000 Black-Eyed Susan (G2) May 19.

“We had a great meet. I had a lot of seconds but … we’ve all been working hard to win this,” Lynch said. “My agent, Scotty Silver, has done a great job and put me on some very nice horses and we got the results we wanted. Second in the Black-Eyed Susan, as frustrating as it was at the time it was still a great run. It’s just nice to get on these horses.”

Motion and Magee joined Mike Trombetta and Mary Eppler with five wins apiece heading into Monday. Pimlico-based Magee, who shared Laurel’s winter-spring meet title with Linda Rice, took a brief lead after No More Excuses ($7.60) captured the second race until Just Howard ($5.80) snuck up the rail in the fifth to allow Motion to tie.

Magee, who owns or shares five Laurel championships, has now won back-to-back Pimlico titles and three in the last four years, also finishing first in 2014. It is the first Maryland meet title for Fair Hill Training Center-based Motion, whose victories included No Mo Dough in the LARC Sir Barton and Happy Mesa in the Hilltop over Preakness weekend.

“I love Pimlico. This is home for me and I’m just thrilled to share [the title] here. Thrilled,” Magee said. “I came in empty and claimed some horses and brought some horses back off layoffs. The horse that won today was coming off a layoff. I claimed her at Charles Town. She won going 4 ½ [furlongs] and it was a stretch today going 5 ½ but won for a share of the title, so that was a thrill.”

The conclusion of the Preakness Meet at Pimlico meant mandatory payouts in the 20-cent Rainbow 6, 50-cent Late Pick 5 and $1 Super Hi-5 wagers.

The Rainbow 6 jackpot is paid out only when there is a single unique ticket sold with all six winners. On days when there is no unique ticket, 60 percent of that day’s pool goes back to those bettors holding tickets with the most winners while 30 percent is carried over to the jackpot pool. However, on days when a mandatory payout is scheduled the entire pool is shared by those holding tickets with the most winners.

The Late Pick 5, which offers an industry low 12 percent takeout, returned $137.50 to multiple tickets with all five winners. Winning Super Hi-5 tickets from Monday’s finale were worth $1,260.

Live racing shifts to Laurel Park for its summer meet that runs Friday, June 9 through Sunday, Aug. 20. Latin American Racing Channel simulcast wagering will be available at Laurel during the break between meets.

Notes: Jockeys Jevian Toledo and Edwin Gonzalez each ended the meet with riding doubles. Toledo was first aboard Southern Peach ($6) in the third race and She’s Achance Too ($7.20) in the sixth while Gonzalez won with No More Excuses ($7.60) in the second and Baby Cat ($14) in the fourth. … Apprentice Carlos Carrasco was shaken up when his mount, Fifty West, became fractious in the starting gate prior to the ninth. Fifty West was scratched and Carrasco walked under his own power to a waiting ambulance.