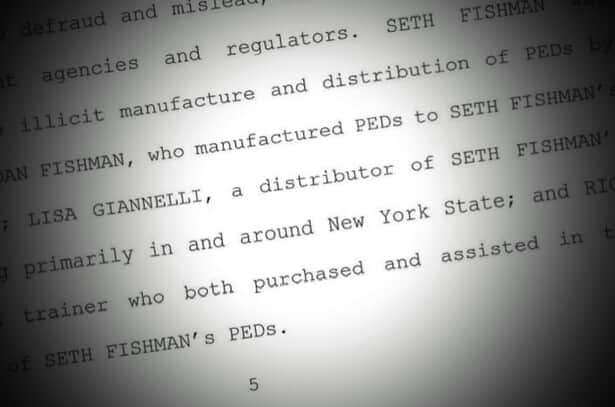 Two defendants in the government’s 2020 sting against horse-racing drug abuse were scheduled to be the first to face trial starting Wednesday morning in New York.

Dr. Seth Fishman, a veterinarian, and Lisa Giannelli, a distributor, were ordered by federal judge Mary Kay Vyskocil to stand trial this week in the Southern District of New York. Last week Vyskocil rejected a defense request for a postponement.

The trial was scheduled to begin with jury selection Wednesday.

Fishman and Giannelli are accused of tampering with and mislabeling performance-enhancing drugs and trying to defraud the government. Fishman faces four counts of conspiracy; Giannelli two. Each charge carries a maximum of five years in prison and a $10,000 fine.

There were 29 defendants named in the case, most notably trainers Jorge Navarro and Jason Servis.

Navarro was sentenced to five years in prison and ordered to pay back $25.8 million of the $34.8 million he grossed in purse earnings. He was among 10 defendants in the case who admitted their guilt in plea deals.

Servis, who pleaded not guilty, is expected to go on trial this year. Only days before the indictments nearly two years ago, he trained Maximum Security to victory in the inaugural $20 million Saudi Cup. When the federal case was brought against him, race organizers froze the $10 million winner’s share, which has yet to be paid to owners Gary and Mary West.